Connect with us
Josh Myers can be the best center in the country.

COLUMBUS — Josh Myers had never even started a game yet for Ohio State when the trophy came up publicly for the first time.

In the media tent outside the Rose Bowl, Myers was drawing a small crowd as the expected heir-apparent at a position where the Buckeyes had built something of a dynasty.

Rimington Trophy or bust? That’s an absurdly high standard to match, but it had effectively become the expectation after Pat Elflein and Billy Price went back-to-back as the best centers in the nation — and Myers hardly needed the reminder.

“I’m not thinking about it [now], but I appreciate you putting that in my mind — thank you,” Myers said back then with a laugh. “When you’re around it every day, I walk those halls and see it every day, I know it’s expected to play at that level every day, you just get used to it. Eventually you get comfortable with it, but at first, it’s incredibly uncomfortable because you know that’s the level of greatness you have to achieve. 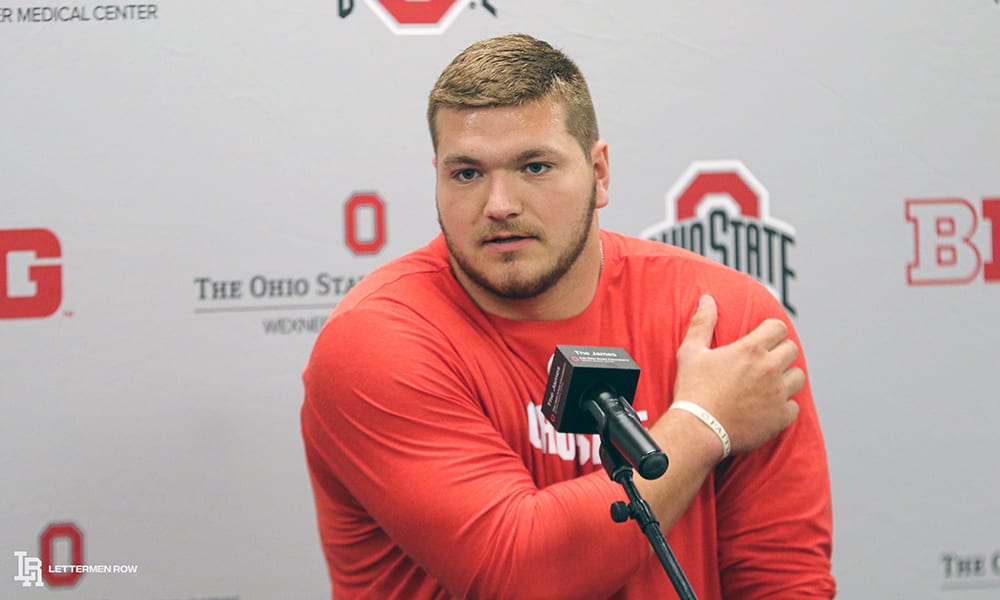 Ohio State center Josh Myers is continuing the tradition for the Buckeyes in the middle. (Birm/Lettermen Row)

“When you’re young and when you’re not playing well, you think: ‘Wow, I’ve got a long ways to go.’”

Turns out there wasn’t much for Myers or the Buckeyes to worry about once he finally got his shot in the middle of the offensive line. If he had any established name recognition outside of the Woody Hayes Athletic Center last offseason, Myers would probably already have put his hands on the Rimington Trophy based on his phenomenal debut campaign as a starter.

That obviously won’t be a problem this season as Myers comes back on the short-list of contenders for the top prize at his position. There’s probably a strong case to be made that he’s the odds-on favorite to win it, especially as he comes back with another year of experience under his belt and a chance to get even better for Ohio State.

How was Josh Myers able to make such a seamless transition into the lineup for the Buckeyes? Where can the center get more productive for Ohio State? Is he ready to add to the Rimington Trophy legacy for the program? Former Ohio State center and Rimington winner Billy Price joined Lettermen Row to break down a little film and answer those question in the latest episode of BuckIQ.

Would like to pull bryce foster out of texas. He reminds me of myers.

Brian, according to 247 interest stats, stop “likin” and… start pullin!