COLUMBUS — For years, Ohio State has been able to hang its hat on some of the most impressive linebackers in the country. Now, it’s time for Malik Harrison to help continue that proud tradition for the Silver Bullets.

Even through some of the ups and downs last season, pure athleticism never seemed to be an issue for the Buckeyes with Chris Worley and Jerome Baker holding it down on the outside. But it was during an injury for the latter where Harrison really started showing his potential, turning in an impressive performance in a dominant victory over Michigan State. Harrison didn’t have an abundance of opportunities like that one to show what he could bring to the outside linebacker position, but there is still more than enough evidence on film to see that he can be a game-changing force for Ohio State. 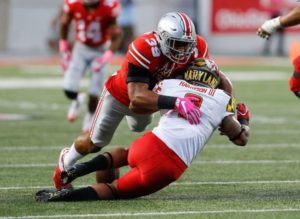 With some uncertainty still about Tuf Borland’s return from a spring injury, that leaves Harrison as potentially the only sure thing in the starting lineup at the second level for the Buckeyes heading into the opener on Sept. 1. He’s still inexperienced at this point in terms of starting games, but Ohio State wasn’t exactly shy about getting him reps in key moments last year, either. Harrison has been groomed for this role, and the expectation here is that he will shine and set the tone for what could be one of the nation’s best defenses.

There are just two weeks to go now until the Buckeyes can unleash him in a game that matters. Here at Lettermen Row, we’re passing the time in one of our favorite ways: Popping in some film for a BuckIQ segment that has Malik Harrison squarely in the spotlight.

Soon enough we’ll have fresh game tape to analyze, and honestly we can’t wait. But until then, take a look at what Harrison did last year — and what that might mean for this season.