Connect with us
Harry Miller can be a key member of the offensive line.

COLUMBUS — The future for Harry Miller at Ohio State is at center.

But the most successful blueprint on the Buckeyes offensive line calls for a stint at guard before winding up as the anchor, so that’s where the present is for the standout sophomore.

Miller has always known that was likely going to be the path to consistent playing time at Ohio State, following in the footsteps of Rimington Trophy winners Pat Elflein and Billy Price who cut their teeth one spot over from the middle before becoming the best snappers in the country when it was their turn.

Even before Miller stepped foot on campus, he was blowing away the coaching staff and his future teammates with the way he was learning remotely, using FaceTime to join meetings so he was ready the moment he arrived at Ohio State. His physical tools were just as impressive as advertised as well, validating his lofty recruiting ranking and somehow even raising the expectations heading into spring camp this year.

The Buckeyes only got in three practices before the pandemic shut it down. But Miller was already looking like a safe bet to fill the vacant spot at left guard and become a regular for Ohio State.

“We’re trying to find the best five guys to play,” Ohio State coach Ryan Day said last month. “And Thayer [Munford], Josh [Myers] and Wyatt [Davis] are obviously returning. So now we’ve got to find the next — we’ve got to find No. 4 and 5. However that shakes out, we’ll try to figure that out. 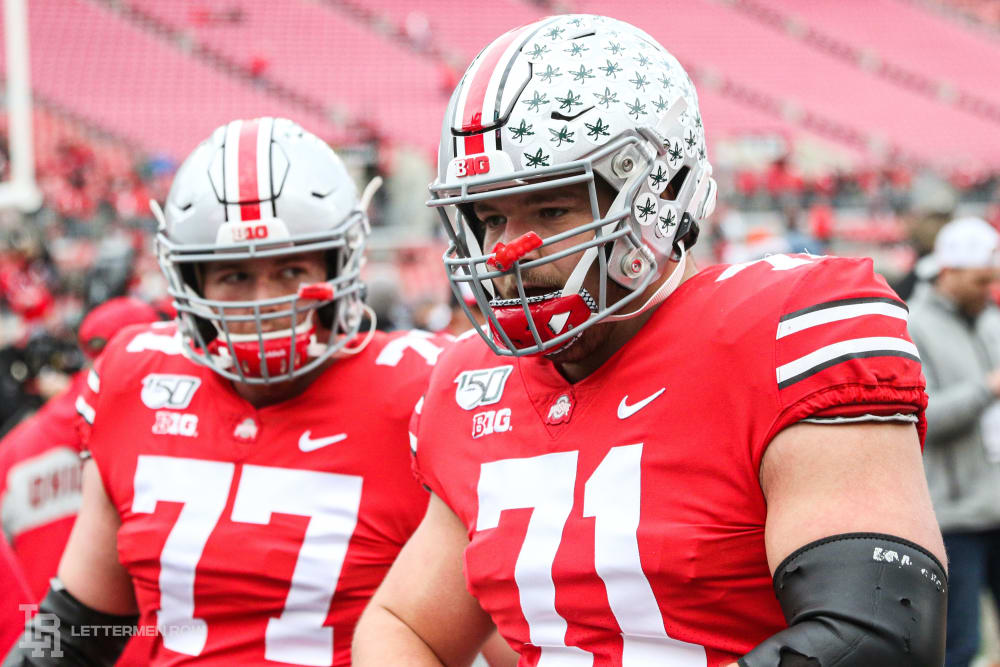 Ohio State will likely have both Harry Miller and Josh Myers on the field this season together. (Birm/Lettermen Row)

“But certainly we don’t want to put guys into roles and then not have the best five guys on the field. So whatever that is, we’re going to try Harry at guard and see if he can be No. 4. And then figure out who plays at right tackle, that’s the idea.”

Odds are the Buckeyes will be able to focus on the battle at tackle whenever they’re able to resume football activities. There is plenty of competition alongside Miller, including guys like classmate Enokk Vimahi and veteran Gavin Cupp.

Harry Miller would appear to have the edge right now. And that keeps him on track to follow a plan that has worked perfectly for the Buckeyes over the last few years.

What makes Ohio State so excited about the future for Harry Miller on the offensive line? How impressed were veteran Buckeyes in the meeting room and on the practice field with Miller last year? Where can the interior blocker improve as a sophomore? Former Ohio State guard Jonah Jackson was back in the virtual film lab with Lettermen Row to break down the film and answer those questions in the latest episode of BuckIQ.

Analyzing talent disparity between Buckeyes, Michigan
Next Man Up: How Buckeyes will replace record-breaking K.J. Hill in slot
Advertisement