Connect with us
Zach Harrison is still growing as an impact player for Ohio State. (Birm/Lettermen Row)

He’s not worried about his sack total, and the sophomore certainly has no issues continuing to be part of a rotation for the Rushmen.

As long as the Buckeyes are winning, that’s the only number Harrison is worried about right now. Even if the other details might not be exactly what was projected from outside the program heading into the season, that doesn’t mean Harrison isn’t on the track to stardom that so many other Ohio State pass-rushers have followed in their careers.

“I mean, we’re 3-0, so that’s what I envisioned,” Harrison said before practice on Wednesday. “We’re winning every game, so I’m happy. With my playing time, with my production, with all the other ends in there and their playing time — we’re just happy to say we’re 3-0. 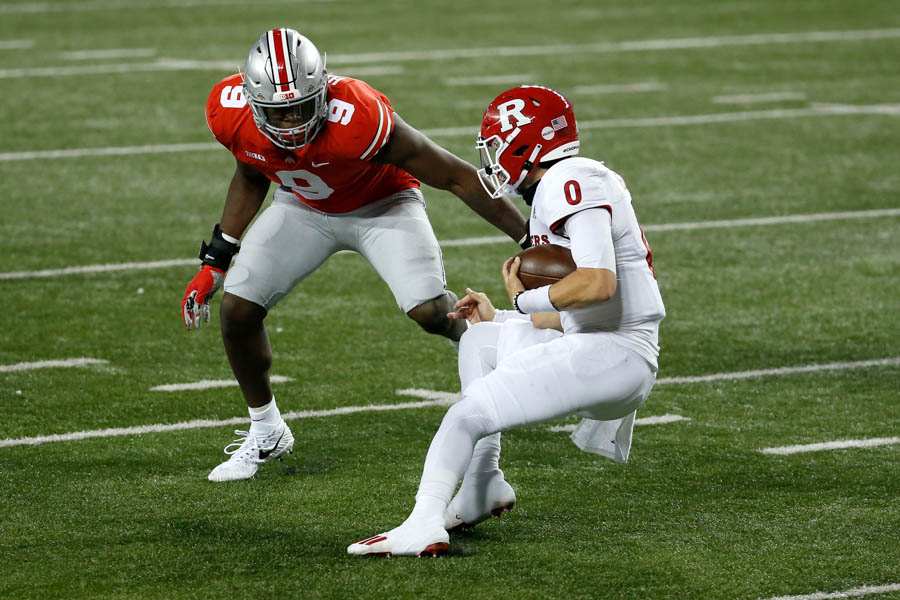 That process takes time, of course, and Johnson’s patient approach and strong belief in rotating even his most gifted defensive linemen isn’t going to change anytime soon. Harrison almost certainly would be playing more snaps had he ended his high-profile recruitment by picking a different program — but he chose Ohio State, Johnson and this path for a reason.

And Harrison is still making the most of his workload with the Buckeyes, heading into the huge matchup against Indiana on Saturday second on the team in tackles for loss and sacks at this early point in the season.

“I think he’s just got to keep doing what he’s doing,” Ohio State co-defensive coordinator Greg Mattison said. “When you play for Coach Johnson, the one thing you’re going to do is work as hard or harder than anybody that plays the game at that position — and you’re going to be getting taught the technique better than anywhere else. All he has to do is keep doing what he’s doing.

“Zach Harrison is special. Zach is special young man, he’s so talented and he comes to work every day.”

The length of the shift might not be as long as some expected before the season considering how obvious that off-the-charts physical ability is for Harrison.

But it’s all by design. And other than wins, Harrison knows he can also just count on Larry Johnson to do what’s best for him and Ohio State.

“The rotation, it’s just there to help us,” Harrison said. “It’s only a good thing, I think. Football is hard, it’s tiring. If we’re going full speed, you’re not going to be able to play the whole game at full speed, it’s just not realistic.

“If guys come in and keep us fresh and rotate, by the end of the game, the offensive line has been in there every single play and we’ve only had 20 plays going into the fourth quarter. We’re all still relatively fresh, and that’s when we start really picking up speed.”

That’s also how Zach Harrison and the Buckeyes make sure that number that really counts in the win column keeps going up.

Ohio State quarterback Justin Fields, wide receivers coach Brian Hartline, co-defensive coordinator Greg Mattison and defensive end Zach Harrison all spoke with the media on Wednesday before practice. The full comments from the Buckeyes can be viewed below, and all Ohio State press conferences can be streamed live on the Lettermen Row YouTube channel.