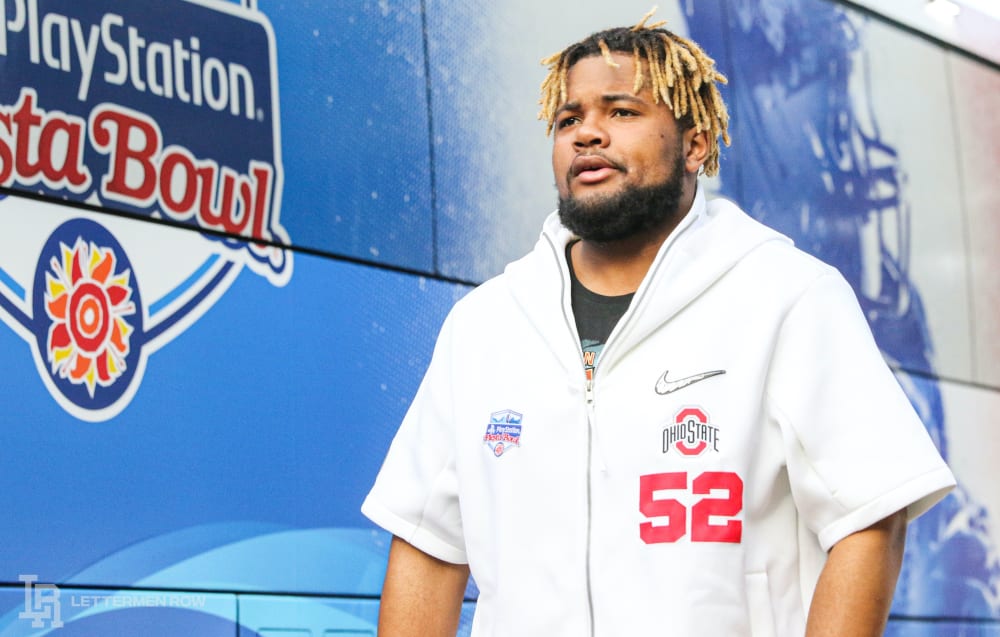 Ohio State guard Wyatt Davis is opting out of the college football season to enter the NFL draft. (Birm/Lettermen Row)

COLUMBUS — Wyatt Davis could have been a first-round pick if he left Ohio State after last season.

But the All-American guard came back to the Buckeyes for one more shot at a national title and a chance to become just the third two-time consensus All-American offensive lineman in program history.

With the opportunity for a title hinging on a vote by league presidents and an All-American campaign in doubt, Davis announced he will opt out of the Big Ten football season — whenever it may be — and turn his attention to the 2021 NFL draft. Davis confirmed the move initially with an interview with Pete Thamel posted on Friday morning, and he confirmed it to Lettermen Row in a phone conversation.

“With the season just getting pushed back and pushed back and no communication from the commissioner, my family and I just thought it was in our best interest to take the next step,” Davis told Lettermen Row. “It’s bittersweet. It’s tough. I came back to win a national championship, and to not have that chance now hurts.

“We kept waiting as long as possible to hear some good news. This was really stressful for all of us, including my coaches who were fighting for us to play. It’s a very odd time, and it’s unfortunate this pandemic took this away from us.”

Davis, who has dominated in the trenches since taking over the starting guard job for Ohio State, is a projected first-round draft pick in the upcoming NFL draft this spring. He is the first player from the Buckeyes to opt out since the Big Ten canceled its fall football season last month.

With no plans made by the league since then, Davis is instead turning his focus to preparing for the draft, where he could be one of the first linemen off the board.

After his first career start in the 2018 Big Ten Championship Game, Davis took over as a full-time starter to close that season and into last year. He finishes his Ohio State career with 16 starts. Davis was graded as a champion by the Ohio State coaching staff 10 times last season and won his All-American honors while helping the Ohio State offensive line as a finalist for the Joe Moore Award for the country’s top offensive line. He was named a preseason All-American this summer by the Associated Press and other publications.

But he’ll never become a two-time All-American for the Buckeyes. Instead, he’ll begin his preparation to become a first-round draft pick in the spring.