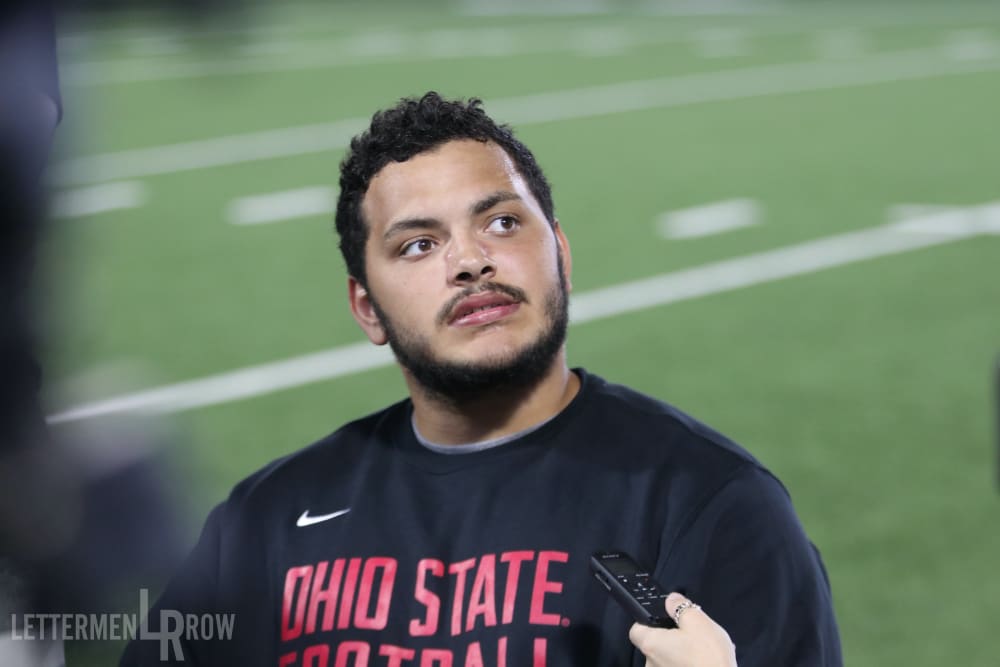 COLUMBUS — Jonah Jackson has been through this before, just not at Ohio State.

As a captain for Rutgers along the offensive line a season ago, he led the Scarlet Knights after years of earning trust from teammates. Although he’s expediting that process as he enters his first season at Ohio State, he’s learning and fitting in quickly.

He didn’t transfer to Ohio State to sit the bench, but when he arrived, his presumed starting spot at left guard wasn’t guaranteed.

“They told me this was going to be a fight,” Jackson said. “Coming to a place like Ohio State, the talent is the cream of the crop. I was told probably left guard, and I’d have to battle it out with Matt Jones, Gavin Cupp and them.”

But so far through the first week of training camp, he’s earning his spot.

The lone returner on the Ohio State offensive line, Thayer Munford, is a big fan of Jackson, the guy he’ll likely line up beside on Aug. 31 against Florida Atlantic.

“Personally, I feel like I can play with him, like after the first day I was like, ‘OK, I can play with him,'” Munford said. “Last year, we had our struggles because I was new to the offensive line. … I wasn’t ready. But I’m more confident and know what to do now.

Jackson will play a pivotal role for the Buckeyes moving forward. But he’s not the only new starter. Here’s what Lettermen Row learned after the offensive line talked with the media following training camp at the Woody Hayes Athletic Center on Thursday.

Thayer Munford back to 100 percent for Ohio State

Thayer Munford didn’t want to miss the Rose Bowl, and he definitely wasn’t pleased with missing all of spring practice. But after an injury kept him sidelined for a few months, he rehabbed and worked his way back to the starting lineup.

He looked good enough in the summer, so coach Ryan Day named him the only sure starter heading into training camp. So far, Munford is proving that he’s back to 100 percent — where he wasn’t even when he was on the field a season ago.

“I feel a lot better than I did last year,” Munford said. “I’m just happy to be back with my brothers. Happy to compete. Happy to be with them on the field. That’s really the important thing for me. I’m just happy just to be out there.”

That’s a welcome sign for Day and the Ohio State offense.

Nicholas Petit-Frere won’t forget what he had to do this offseason: Put on quite a few pounds to be ready for the season. That wasn’t easy. But now, it’s over, and it was worth it.

“It’s been one of the hardest things I’ve ever had to do in my life,” Petiti-Frere said. “Back in Little League, I actually had to lose weight twice. I lost like 25 pounds twice, and that was easy for me.

“It’s been a long process, and I’m grateful for the people that have been around me.”

Now that the process is over, Petit-Frere is reaping the benefits of his weight gain and offseason training. He’s running training camp as a potential starter at right tackle, and he’s realizing the weight he added wasn’t all that bad.

“I actually improved my 40 time from last year by like half a second or a second,” he said. “That just shows you the work that [strength coach Mickey Marotti] has.”

As Ohio State prepares to start four new offensive linemen, the unit will be inexperienced. Only one likely starter will be a senior — and that’s Jonah Jackson, who has never played a game for Ohio State.

Wyatt Davis has only two starts at the college level. But he’s not concerned with the lack of Big Ten experience on the offensive line for the Buckeyes.

“We like the concern of us being young,” Davis said. “In practice, even if you’re not playing here at Ohio State, you’re going against the best of the best on the defensive line. That preparation, even in my case, even though I started two games, when I came in it was such a fluid transition because practices here are so intense.

“I feel like practices are 10 times harder than the games, just as far as the expectation of practice, there’s no lacking the expectation for us. It doesn’t matter if you just get here or if you’re just starting up, there shouldn’t be any drop off. We actually want people to worry more.”

That’s the mindset for the Buckeyes. Inexperienced? Yes. But each linemen seems to think the Buckeyes are talented enough to overcome that.

Ohio State’s offensive line is as deep as ever

Two seasons ago, Urban Meyer cited that the Ohio State offensive line was dangerously thin, and one injury could be detrimental for the Buckeyes.

Times sure have changed.

Offensive line coach Greg Studrawa loves the unit he has, and he thinks the Buckeyes are deep at every spot along the line.

“I had a really good feeling we were going to be as deep as we’ve been,” Studrawa said. “That hasn’t disappointed me. We’re right where I thought we’d be. The competition is unbelievable. There’s four tackles that would start anywhere in this league and a lot of places. I have the benefit of having four.

“The inside guys — Harry Miller’s been unbelievable. Josh Myers is becoming a great player. Working his tail off. His attention to detail is unbelievable. He’s becoming exactly what I thought he’d become.”

Don’t count Branden Bowen out of the conversation, either. Bowen would have been a starter the last two years had he not broken his leg in 2017. He knows how to play most positions on the line, and that adds even more depth.

For more interviews with the Ohio State offensive line and much more analysis of the Buckeyes, check out the Lettermen Row YouTube channel.