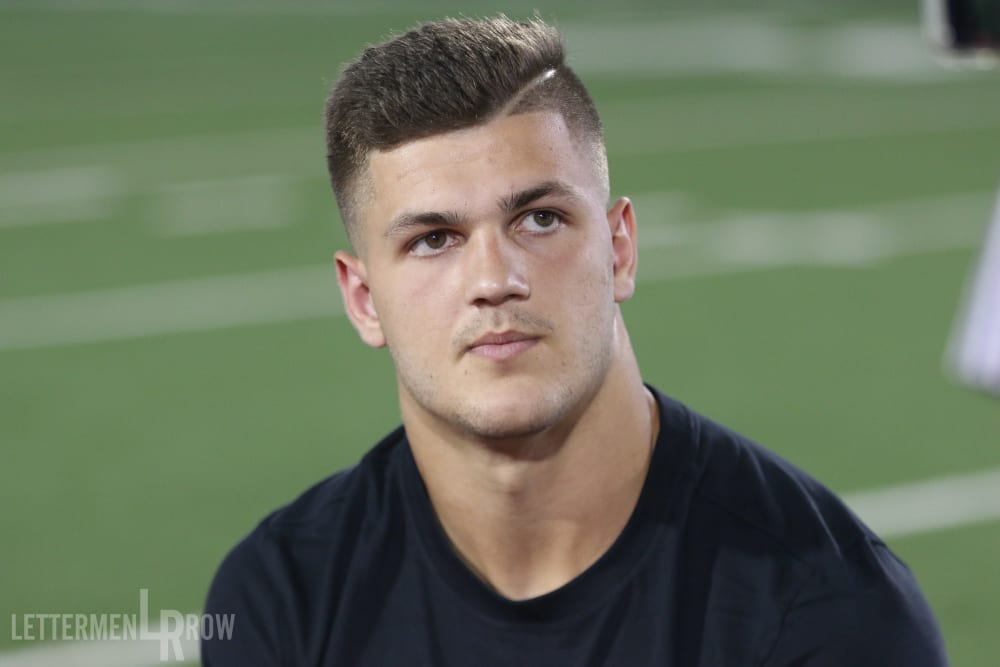 Jeremy Ruckert could be a big part of the Ohio State offense this season. (Birm/Lettermen Row)

As a proven commodity who set out to correct his self-proclaimed failure from a season ago, Dobbins didn’t need to be called out. But the other backs on the roster were challenged by Day to take control of the backup and complementary role to Dobbins.

The Buckeyes seemed to have found the guy who did that, and running backs coach Tony Alford answered who his backup would be before one of Lettermen Row’s reporters could even ask the question.

Alford cited McCall’s focus as a big point of improvement, too. Although he’s taken a handful of pass-catching reps in the media portion of practice, McCall hasn’t had to bounce around between receiver, H-back and running back. Instead, he’s been focused on becoming a better running back. That means his on the field production and his attention to detail with the training staff.

Dobbins is the starter, and McCall is now his backup. The Ohio State offense is coming together just in time for the season opener next week. Questions have been answered at tight end and running back. Here’s what Lettermen Row learned from the media session with the backs and the tight ends.

Tight end depth could be huge for Ohio State

Ohio State hasn’t historically thrown to tight ends. An Ohio State tight end hasn’t caught 30 passes in a season since 2003. With the depth Ohio State has at tight end this season, that total may not change.

The Buckeyes figure to be deeper at tight end, rotating three and possibly even four different tight ends onto the field. That means that while none of the tight ends pass the 30-catch threshold, the position could be more productive than in previous seasons.

“We have a ton of guys that have experience,” Luke Farrell said. “One of the more experienced tight end groups that I’ve been a part of. It’s a plus for me being able to rely on each other throughout the unit.”

With the talent and depth, the Buckeyes will have to find room for each tight end on the field. That hasn’t been easy in years past, but the two-tight end sets that Urban Meyer never really put into motion could be a big part of the offense this year. They might even line up in the slot. Anything to get those guys on the field.

“You only do that because those guys are playing well,” offensive coordinator Kevin Wilson said. “They’ve earned the right to be out there.”

Maybe Kevin Wilson said it best: “Ruckert is a sponge, wanting to grow and get better.”

No matter who is asked, the answer is similar. Ruckert has improved quite a bit during his offseason. When he came to Ohio State as a highly-recruited prospect, he was new to tight end. He played receiver in high school, so he had to learn how to block. That’s coming along well, and he’s showing improvement.

“His run game is locked down, pass game locked down,” Rashod Berry said. “He can catch the ball a lot. Overall as a player, he’s working really hard to be the best at the position.”

After last season’s playing time, which featured only one catch all season but a few good blocks, Ruckert is expected to be a breakout candidate for Ohio State. Ruckert cites technique as an area he’s grown in the most. But part of his maturation wasn’t just learning to block, but learning to like blocking.

He’s doing a good job of that so far.

“I definitely like it,” he said. “Inside drill’s the most fun at practice.”

Master Teague absence allows others to step in

Master Teague was thought to be a candidate for the backup running back role that has now gone to McCall. But that’s not to the fault of Teague, who has missed most of the Ohio State training camp with an injury.

With that, Alford has been able to give the other backs a chance to prove what they can do on the field.

“Somebody who was going to share reps isn’t in there,” Alford said. “It just provides more opportunities for the other guys. They’ve capitalized on those.”

“Every single day during training camp is new for Steele Chambers,” Alford said. “Every day is a new day. It’s an eye-opening experience because he’s never done it from day to day. And even for Marcus [Crowley]. He’s never been through a college training camp.”

It’s a good problem to have, but it’s a problem.

“Guys are fighting to get on the field,” Wilson said. “When we get in these early games, we’re not going to try to be cute. Some of these guys have just earned the right to play whether that’s one tight end, two tight ends. Coach Day and myself, [co-offensive coordinator Mike] Yurcich, we’ll work through that these first couple weeks. I don’t think anything’s going to be radical.”