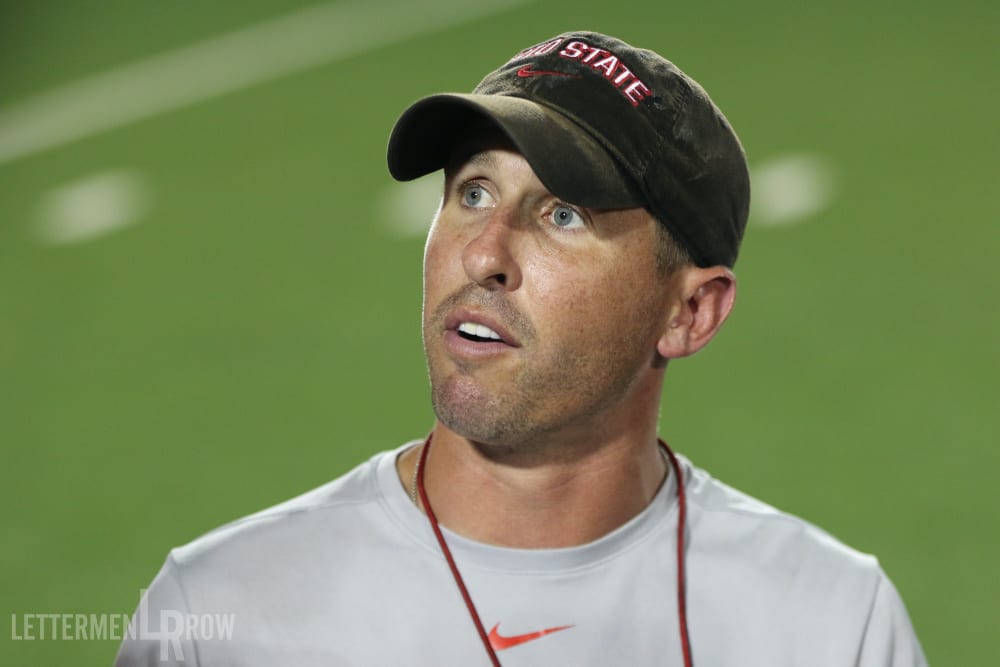 COLUMBUS — The interim year was absolutely aced by Brian Hartline at Ohio State.

So, what can the wide receivers coach do as an encore?

Already with a work ethic that can’t be questioned, Hartline conceded that he might have even pushed it harder last season as he adjusted to life as a full-time assistant for the first time in his career. And the results both on the recruiting trail and with a unit that was perhaps the strongest overall on the Ohio State roster left no doubt that he was worthy of having that interim tag ripped off as he earned his place on Ryan Day’s debut coaching staff.

The trick for Hartline now is matching that same intensity again in Year Two with a retooled group of wideouts that is replacing three seniors. So far, that doesn’t appear to be a problem based on the way he’s attacked training camp.

“Talking about the difference, you know, I would say that maybe a year ago I was still playing catchup,” Hartline said. “I always feel like I’m playing catchup and I never know enough or am doing enough. But I think last year might have been — I don’t want to say I’ve lost an edge, because there is no edge lost. But definitely on pins and needles probably a little more when it’s your first time more than anything else.

“But I still feel like I’m at a level where I’m not where I want to be. I’ve always had a chip on my shoulder, and I don’t think I’m ever going to lose that.”

That same motivation exists with a handful of Buckeyes looking to take the next step in their careers on the field. And after the wideouts and Hartline talked with the media this week, here’s what Lettermen Row learned about Zone 6 as the season opener creeps ever closer.

The Buckeyes have tried to keep the actual rotation under wraps as the competition for playing time developed during August, and it’s always subject to change once the season actually starts.

But just like they’ve done for the last couple seasons, it appears that at least six guys will share the workload at the position and try to make up for the production lost by the departures of Parris Campbell, Johnnie Dixon and Terry McLaurin.

“I haven’t sat down and thought about that yet, and I’m sure I’m not the only person who is going to help with that decision,” Hartline said. “But I feel really excited about the opportunity to have a good amount of guys playing on Saturdays, for sure.”

The Buckeyes know for sure that a healthy Austin Mack and veterans K.J. Hill and Binjimen Victor will be in that group. Rising star Chris Olave is ready for a larger role, captain C.J. Saunders is in the mix and freshman Garrett Wilson is vying for early action. From there, it will be up to Jaylen Harris or Jaelen Gill to keep pushing if the Buckeyes are going to expand that group even more.

If Chris Olave wasn’t quite physically ready last season, just imagine what he can do for the Buckeyes now that he’s had a full offseason in the strength program.

The diamond-in-the-rough recruit was still able to make an impact late in his freshman campaign despite arriving on campus at just 170 pounds. And with the confidence that comes from making absolutely huge plays in The Game, the comfort of the second time through training camp and the opportunity for a bigger role, Olave could be poised to become a star for the Buckeyes.

“This whole offseason, I’ve been trying to get my weight up,” Olave said. “I’m up to 185 [pounds] now after playing at 170 last year, and I’ve got a little faster, bigger and stronger. I can’t wait to see how that helps this year.

Zone 6 has become something of a Captain Factory for the program, with five different wideouts having earned that honor over the last two seasons. And while Binjimen Victor didn’t earn the votes to have that role officially, he’s clearly taking some of the leadership burden within the unit on his shoulders.

Victor has long been hailed as the most physically gifted of the receivers, and he started coming into his own as a game-changing weapon a year ago — which has raised the bar for his senior campaign. But rather than talk about individual goals and the chance to become an NFL-caliber target, Victor has consistently turned the attention to his teammates and stressed that team success is much more important to him.

“Really just having that focus and coming in every day going hard, pushing my teammates, worrying about Zone 6 and making plays every chance I get,” Victor said. “Keep attacking every day. I’m really just focusing on helping my team any way that I can.”

Binjimen Victor: Ohio State receiver on consistency and his big expectations
Watch this video on YouTube.

Ohio State has been careful not to go overboard with the hype around Garrett Wilson, but the five-star freshman occasionally makes that difficult when he’s leaping up for highlight-reel catches like he did in the spring game or consistently wowing teammates with his physical gifts on the practice field.

Part of Hartline’s responsibility in working with Wilson is keeping him humble and stressing that he’s not even close to a finished product. And, of course, the other part is making sure he’s ready for his debut season since Wilson clearly needs to be in the rotation.

“I think Garrett has done a phenomenal job of growing, maturing and taking coaching,” Hartline said. “The growth has been really good, and I’m really happy with it — especially with a young guy like that, we’re not even close to scratching the surface of where we want to be. But I can’t say enough positive things about the way he’s going about his business and the way he’s going to grow day in, day out.”