Connect with us
Ohio State tight end Jeremy Ruckert will return for another season. (Birm/Lettermen Row)

COLUMBUS — Jeremy Ruckert has built himself into an NFL tight end.

The Ohio State veteran just isn’t quite ready to actually go be one yet.

The development into an all-around weapon has gone just as scheduled for a guy who arrived on campus with the Buckeyes as the top-rated player at the position in the country. But while that younger version of Ruckert was considered little more than a weapon in the passing game, now he’s added strength and a physical presence as a blocker to that mix. And he topped it off in the national championship by shrugging off a violent targeting hit by bouncing right back up to prove that his toughness isn’t up for debate either.

“We left it all out there, I could tell, our whole offensive line and defense, everybody on the team. We just left it all out there. The score may not have shown it, but I’m just so proud of how far we’ve come, especially in this season, how everything that’s happened. Can’t be anything but just so proud of our guys and how far we’ve come throughout this whole year.”

Now Ruckert is going to give the Buckeyes one more, and his return for a senior campaign might go down as one of the most important pickups for the program this offseason. Ohio State has a pro-ready tight end to build around, and Lettermen Row is breaking down what that means moving forward. 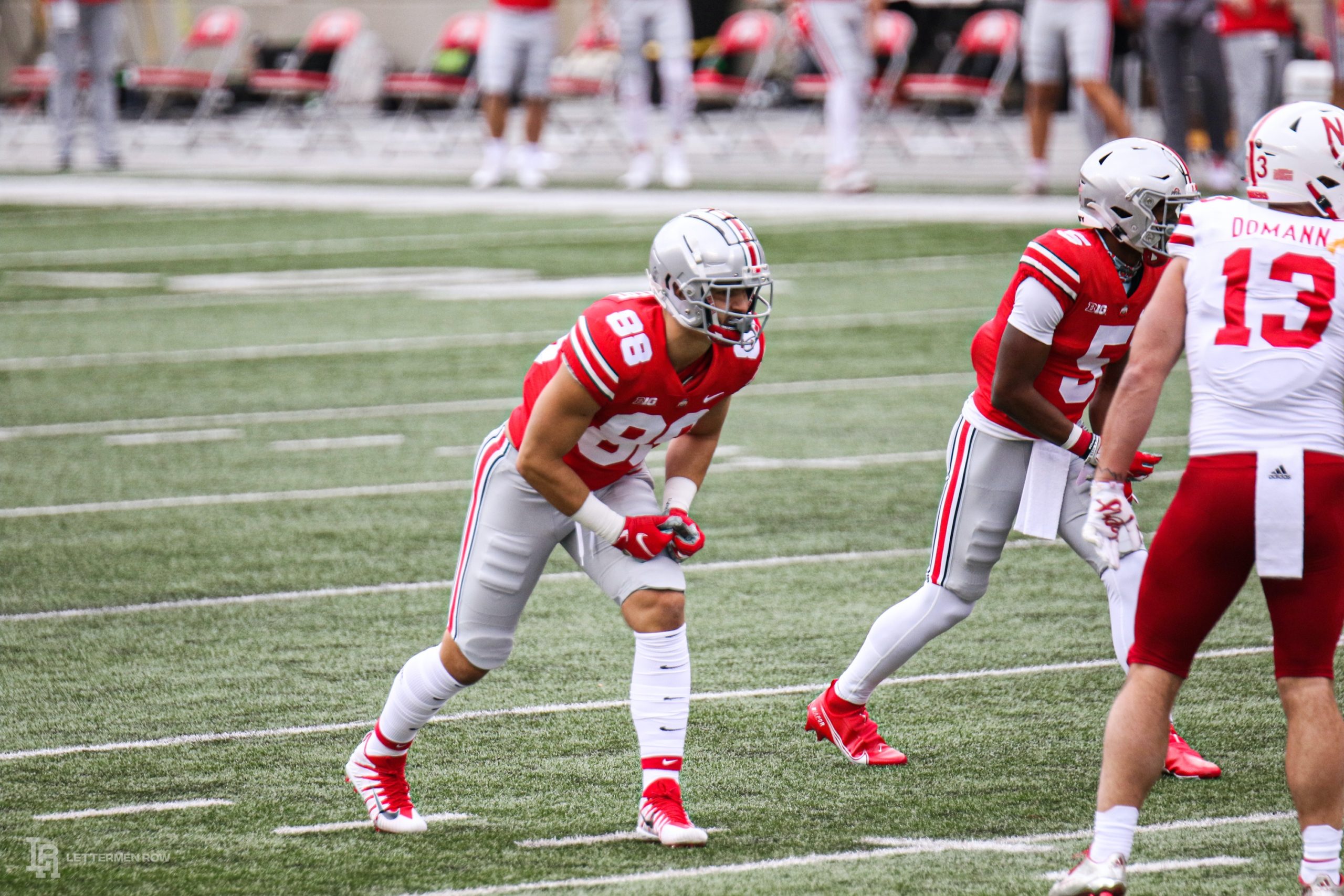 Ohio State tight end Jeremy Ruckert will be a leader for the Buckeyes. (Birm/Lettermen Row)

The tight ends at Ohio State tend to get overlooked outside of the program thanks in large part to the inconsistent usage in the passing attack, but that unit is one of the most appreciated on the roster inside the Woody Hayes Athletic Center. It doesn’t hurt that Jeremy Ruckert has shown a knack for making difficult, highlight-reel grabs and actually finished third on the team in receptions last season. But that’s not where he or departing senior Luke Farrell would get the most praise from teammates or the coaching staff.

Ruckert has come a long, long way as a blocker over the last three years, something he always knew would be required if he was going to become a tight end Ohio State could count on or an NFL Draft pick. There are dozens of ferocious blocks now on Ruckert’s resumé, which is a nice complement to his one-handed grabs and the five touchdowns he scored in the pandemic-shortened season last year.

How Buckeyes could look at tight end now

Two-tight end sets have become a staple of the playbook at Ohio State thanks to the versatility provided by Luke Farrell and Jeremy Ruckert and the blocking prowess of Jake Hausmann. But with only Ruckert returning from that trio next year, the Buckeyes are going to need some new faces to emerge — and Cade Stover will be at the front of that line with Joe Royer trying to follow along in Ruckert’s footsteps.

Stover is a tantalizing prospect for offensive coordinator and tight ends coach Kevin Wilson, who got his wish and plucked the former linebacker from the defensive side of the ball heading into spring camp last year. Stover has never shied away from contact, so the blocking duties will obviously be no problem. And considering his success at tailback while in high school, there’s plenty for Ohio State to like when the football is in his hands as well. This offseason will be key for Royer to keep bulking up and learning the nuances of the position, and he’s got high upside in that role down the road. The Buckeyes could also supplement the rotation with walk-on Mitch Rossi, a grinder who Wilson has put on the field in meaningful situations in the past and likely wouldn’t hesitate to do so again if needed next season.

The return of any surefire NFL-caliber talent is a big deal, and Jeremy Ruckert certainly fits that bill. But the tight end’s decision to stick around is even more valuable for the Buckeyes considering what they’re losing at the position. Luke Farrell is also built for a long career at the next level and won’t be easy to replace. Jake Hausmann also had the kind of physical maturity and experience that programs need off the bench. So, if Ruckert had walked out the door along with those veterans, Ohio State would have been facing a difficult reloading job with a unit that has become one of the strengths of the program. Instead, the Buckeyes have one of the best tight ends in America coming back as a building block.

Bottom line: Jeremy Ruckert is one of the most underrated tight ends in the country, and his return is a major bonus for Ohio State as it looks to win another Big Ten title.