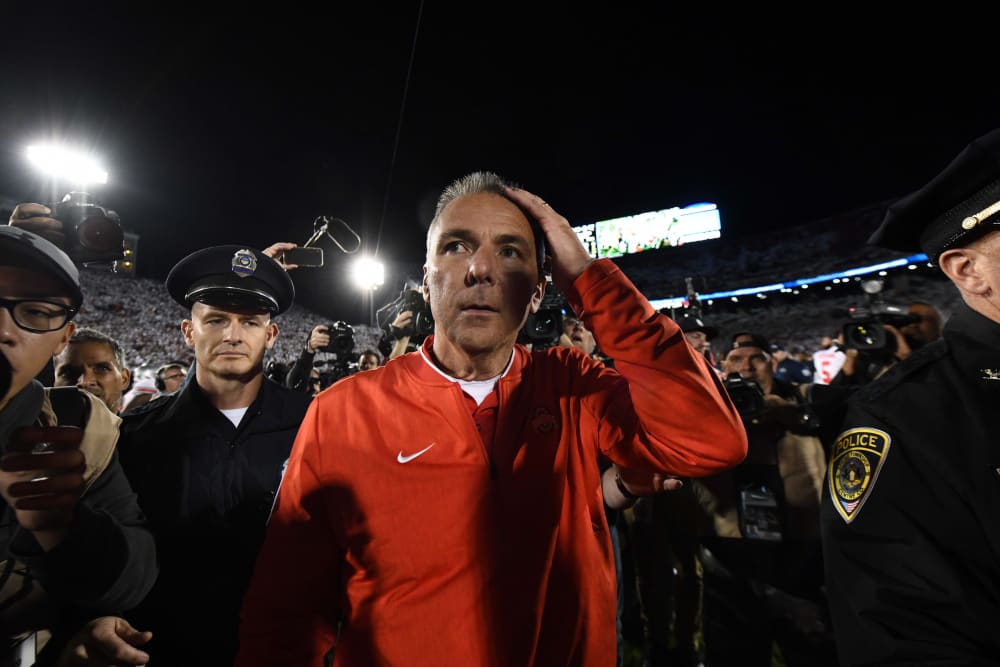 Urban Meyer is dealing with a serious health concern, but it's not going to stop him from continuing to coach Ohio State. (James Lang/USA TODAY Sports)

COLUMBUS — Urban Meyer is in a fight, and it’s more serious than he ever wanted to admit.

It’s not with the athletic department despite the reports of tension. Not with the Ohio State administration even after the August investigation and three-game suspension. It’s not even with the red-zone offense or a shaky defense for the Buckeyes coming off a blowout loss.

The only battle that counts for the seventh-year coach at Ohio State is with an arachnoid cyst that just won’t go away, just won’t stop causing him headaches and is just now something he’s ready to actually be open and honest about in the face of rampant speculation about his future.

“It hasn’t [impacted day-to-day work], but when it flares up, it’s intense,” Meyer said in an interview with Lettermen Row, Cleveland.com and The Columbus Dispatch. “Over the top. Just severe headaches — severe.

“I’m getting peppered with all these questions about my relationship with the administration and all this stuff. This has absolutely nothing to do with that. This is something I’m dealing with, and that’s why I’m talking about it. It’s unrelated to anything else. I am fully committed to Ohio State and the football program for as long as I can, as long as my health allows.” 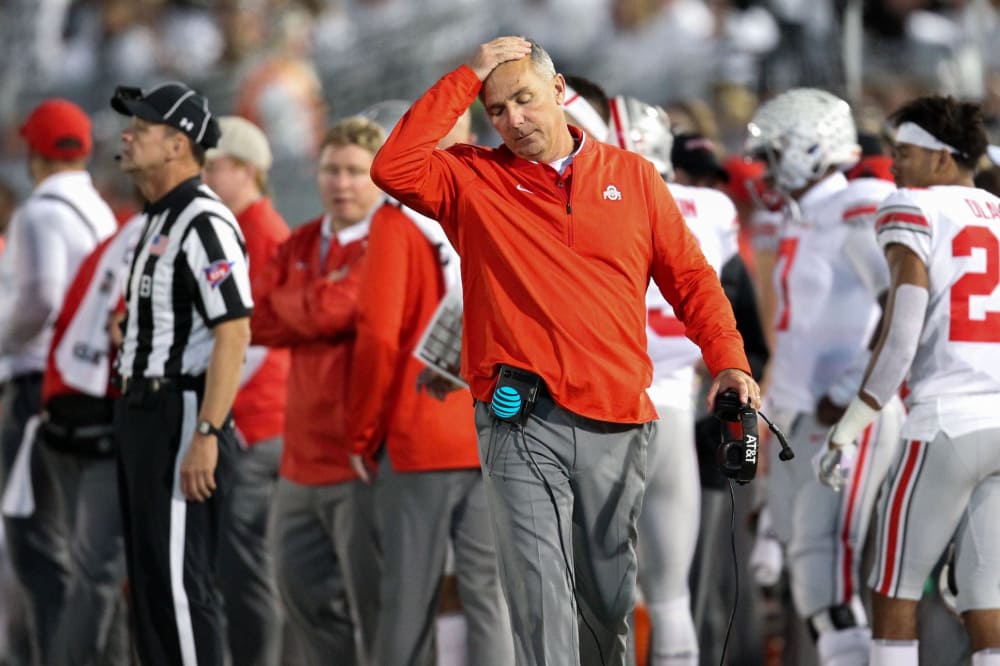 Urban Meyer has shown visible symptoms of the pain in his head on the Ohio State sideline this season. (Matthew OHaren/USA TODAY Sports)

The symptoms of the issue have started showing up in public, though, most recently when he went down to a knee during the second half of the game against Indiana earlier in the month due to a shooting pain triggered by bursts of intensity. But he’s been dealing with the cyst throughout his career, and it’s not just a recent development during his time at Ohio State.

Famously intense and notoriously private, Meyer has tried to downplay the complications that come from an issue that has caused him problems dating back to 1998. And he’s been able to largely keep it in the background thanks to his remarkable success on the field, which includes returning to the practice field just days after his last brain surgery in 2014 and ultimately going on to win the national championship.

“The past four years, we’ve been working closely with Coach Meyer to monitor and manage the symptoms that have risen from his enlarged congenital arachnoid cyst,” Dr. Andrew Thomas said. “This includes aggressive headaches, which have particularly flared up the past two years.”

Meyer refused to go into details about the surgery or how he treats the issue on a daily basis. But typically those procedures involving cysts located inside the brain like Meyer’s involve the drilling of two holes in the skull to remove fluid and alleviate pressure.

But as the symptoms have gotten worse this season, he’s largely been unable to hide his discomfort even while publicly proclaiming that he’s doing just fine.

The head grabs on the sideline. The loss of balance against Indiana. The way he instinctively rubs his head during press conferences. All those signs have been there, and it’s honestly not been hard to see that something has been wrong with Meyer.

But it has been almost impossible to fully understand the situation and the severity of it, since the last time Meyer had an operation it was largely played off like it wasn’t a big deal. 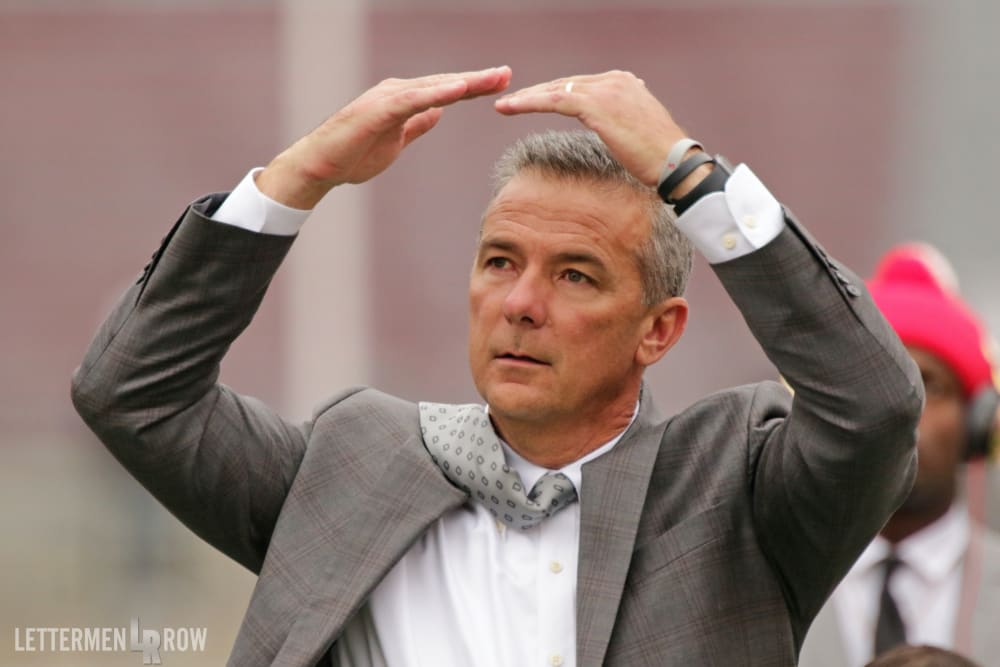 But Meyer’s version of this health matter is perhaps as complicated as arachnoid cysts can get, and it’s possible that another surgery may be necessary even as he continues trying to treat it with medicine to stay on the sideline with Ohio State.

“We’ll cross that bridge when we get there,” Meyer said. “At this time, I don’t have to [have surgery].

“I put my life into this job. I love Ohio State. I grew up a Buckeye. I am 100-percent committed to putting our players in the best possible position to win games and doing right by Ohio State. Nothing about my commitment to Ohio State has changed in any way — this is only a medical issue.”

This certainly isn’t a new problem for Meyer since the initial diagnosis came 20 years ago. It’s not even new at Ohio State.

What seemingly has changed, though, is the perception about his future with the program — which has seemingly been tied up in speculation about all the wrong things.

Certainly the Zach Smith situation was taxing for Meyer in July and August, but he has owned up to his mistakes in keeping him on staff while fireable offenses mounted. There’s no question he wasn’t thrilled to miss all of training camp and the first three games of the season due to a suspension, but he has given president Michael Drake his support. And following reports of friction with athletic director Gene Smith, all many could do at Ohio State last week was scratch their heads considering how close he and Meyer have been and remain.

There is, of course, some issues to be fixed on the field. And Meyer has made it clear exactly how hard he worked throughout the off date last week to address them with the Buckeyes, including one unscheduled 12-hour shift with his coordinators last Monday.

But that’s also right where his current situation gets tricky. 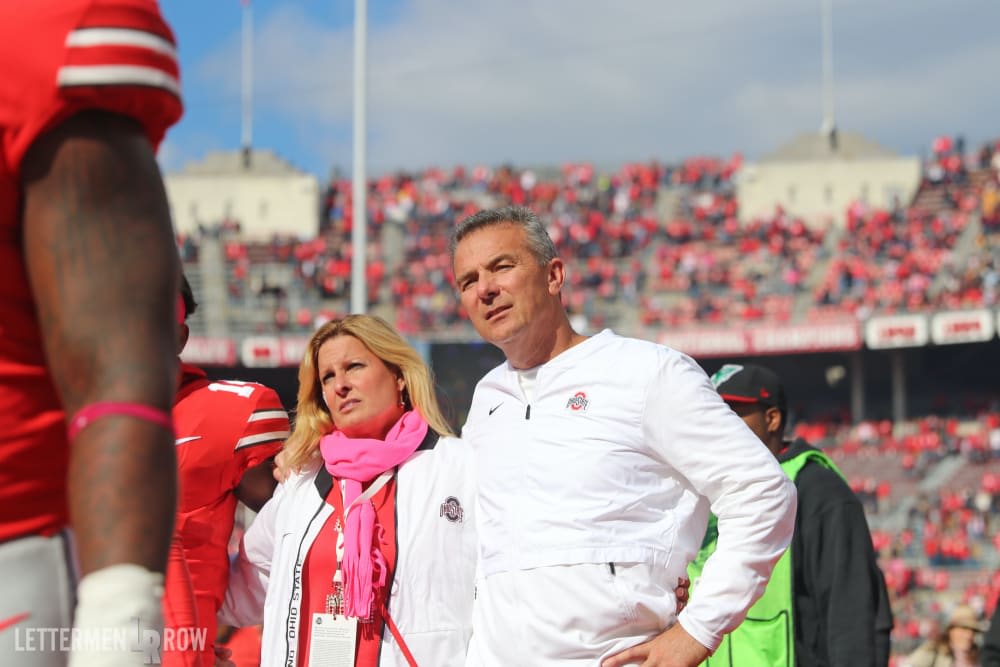 If bursts of intensity or stress can trigger symptoms, that can be a problem for one of the most intense and hardest-working coaches in the history of college football. Meyer doesn’t have an off switch for his competitiveness, and he was raised on toughness and abhors signs of weakness. He’s also as passionate about Ohio State as he’s ever been and fully committed to getting the team back to another Big Ten championship.

How does all of that fit together with Meyer doing everything he needs to do for his family and future? There isn’t an easy answer, and that conversation is most likely far from over.

But his program has never been in better overall shape, from banner recruiting classes to Real Life Wednesdays to the annual development of NFL draft picks.

His relationship with the university remains strong, starting with his boss and extending even to the president who suspended him.

And there’s no question about where his loyalty lies with his dream job.

The lone part of the equation that isn’t completely healthy is Meyer himself. But as long as he’s able to keep working, that’s exactly what he’s going to do.

“This is just a matter of fact,” Meyer said. “This is about the truth, avoiding speculation. When I get those questions: Why do you look like that? Why are you hurting? What’s that pain on your face? I’m fine, guys.

“I’m just managing my way through it and we’re working hard.”

Ultimately, the arachnoid cyst is the only opponent that truly matters. It’s putting up a hell of a lot tougher fight than Meyer has ever wanted to admit.

But when it comes to staying in the job he was born to do, so is Meyer.