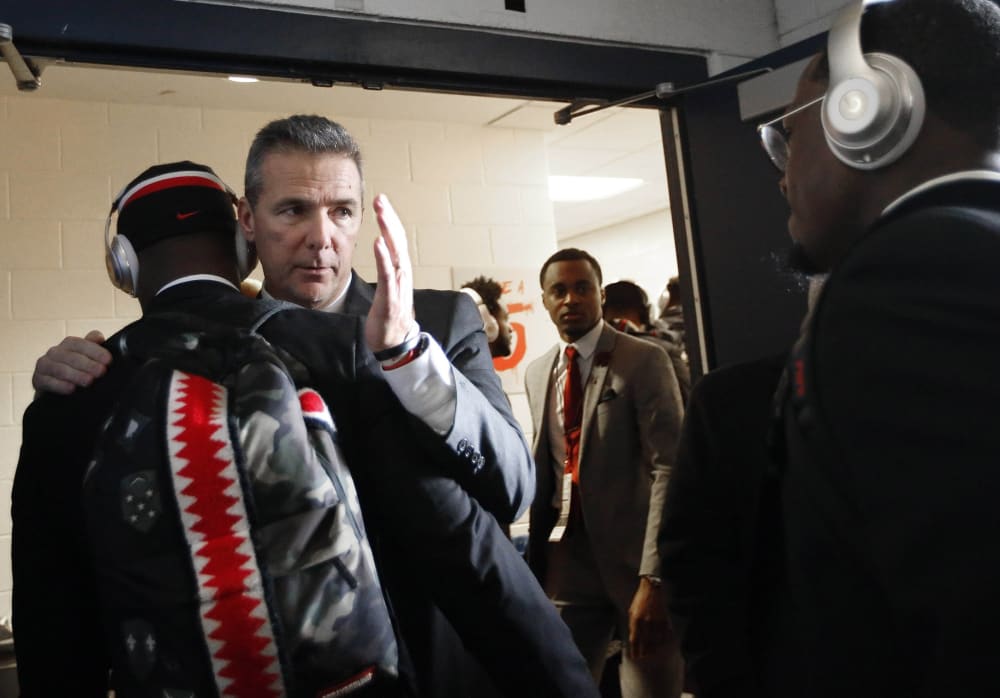 Urban Meyer is now fighting the public-relations battle by himself to clarify facts about his Ohio State suspension. (Winslow Townson/USA TODAY Sports)

COLUMBUS — Ohio State isn’t providing any help clearing up the facts for him, so Urban Meyer is doing it himself.

For the third time in a month, Meyer has turned to his social-media platform to address key issues regarding his handling of Zach Smith that eventually produced a three-game suspension.

The public-relations machine for the Buckeyes apparently can’t even be bothered to specifically, publicly label what he was and wasn’t punished for in the first place, for example. So Meyer took it upon himself to confirm what multiple sources have told Lettermen Row was “mismanagement of a troubled employee” by tackling it directly on Twitter.

“While I stand by my apologies to Courtney Smith, her children and everone else, there have been a number of things reported in the media about President Drake’s decision and the Investigative Team’s Report that have not been correct and must be clarified,” Meyer said in a statement on Friday. “First, I was not suspended because I knew about or condoned Zach Smith’s alleged domestic abuse.”

The Ohio State coach had previously used his account to issue a public apology to Courtney Smith and her kids, and he reiterated that in his latest post.

But multiple sources with direct knowledge of the investigation continue to believe there is no crossover between the domestic abuse allegations against Zach Smith and Meyer’s suspension, and that Meyer was never given any indication of physical harm related to former wide receivers coach Zach Smith.

That’s just one fact from the wide-ranging, thorough investigation that people close to the Meyer camp have stressed in the fallout of the three-game suspension issued earlier this month by Drake. And based on a report from the Columbus Dispatch on Thursday, there appear to still be parts of the report that are still being contested — most notably that Meyer is adamant that he didn’t delete any text messages from his phone.

There was no mention of that in Meyer’s latest public defense, which he’s strangely had to lead from Twitter instead of in a press conference or with any assistance from President Michael Drake or suspended athletic director Gene Smith. Ohio State left far too many questions unanswered in its sham of a press conference on the night of the fateful Board of Trustees meeting, and all that’s really accomplished is a continual resetting of a news cycle that seemingly has no end in sight. 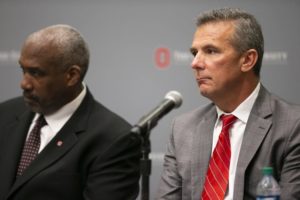 Urban Meyer and Gene Smith are both suspended at Ohio State heading into the opener. (Greg Bartram/USA TODAY Sports)

The latest attempt tries to narrow the focus to three points: Meyer didn’t know about any domestic abuse, he didn’t attempt to lie to cover for Zach Smith at Big Ten media days and he should have taken corrective action against the former wide receivers coach much sooner.

The investigative report confirmed a collaborative effort between Meyer and athletic director Gene Smith to send Zach Smith for help in the midst of his divorce, although not because he was suspected of inflicting physical harm on Courtney Smith. Meyer and Gene Smith are believed to have been working off information in 2015 related to what was presented by one source as “a messy divorce where child custody was involved.” In the absence of any police reports or charges against Zach Smith, Gene Smith and Meyer referred him to counseling to help him through what they viewed as difficulty dealing with the divorce.

That distinction seems to be at the heart of the matter for Urban Meyer, who pledged to support Drake when the discipline was announced but was clearly displeased with the suspension.

The findings presented by Mary Jo White to the Board of Trustees concluded that Meyer “would not hesitate to terminate any coach if spousal abuse was established” and that he and Gene Smith acted in “good faith” over the disputed claims of spousal abuse.

“[Meyer] has a sincere commitment to the Respect for Women core values that he espouses and tries to instill in his player,” the report said. “We believe … if [Meyer] ever came to learn or believe that Zach Smith had physically abused his wife, Coach Meyer would have fired Zach Smith or any other coach on the spot.”

That’s clearly spelled out in the findings, yet that still hasn’t brought this saga to a close.

The investigation is over, the discipline has been handed down and Urban Meyer has publicly owned up to the mistake of keeping Zach Smith on staff in the midst of several issues with his job performance unrelated to criminal matters. That should be the end of it, especially with the Buckeyes set to open their season on Saturday at the Horseshoe.

But even after reviewing 60,000 emails, 10,000 text messages and interviewing more than 40 witnesses before deliberating all of it for nearly 12 hours this month, the matter isn’t going away — and there are still ongoing attempts to establish facts and set the record straight.