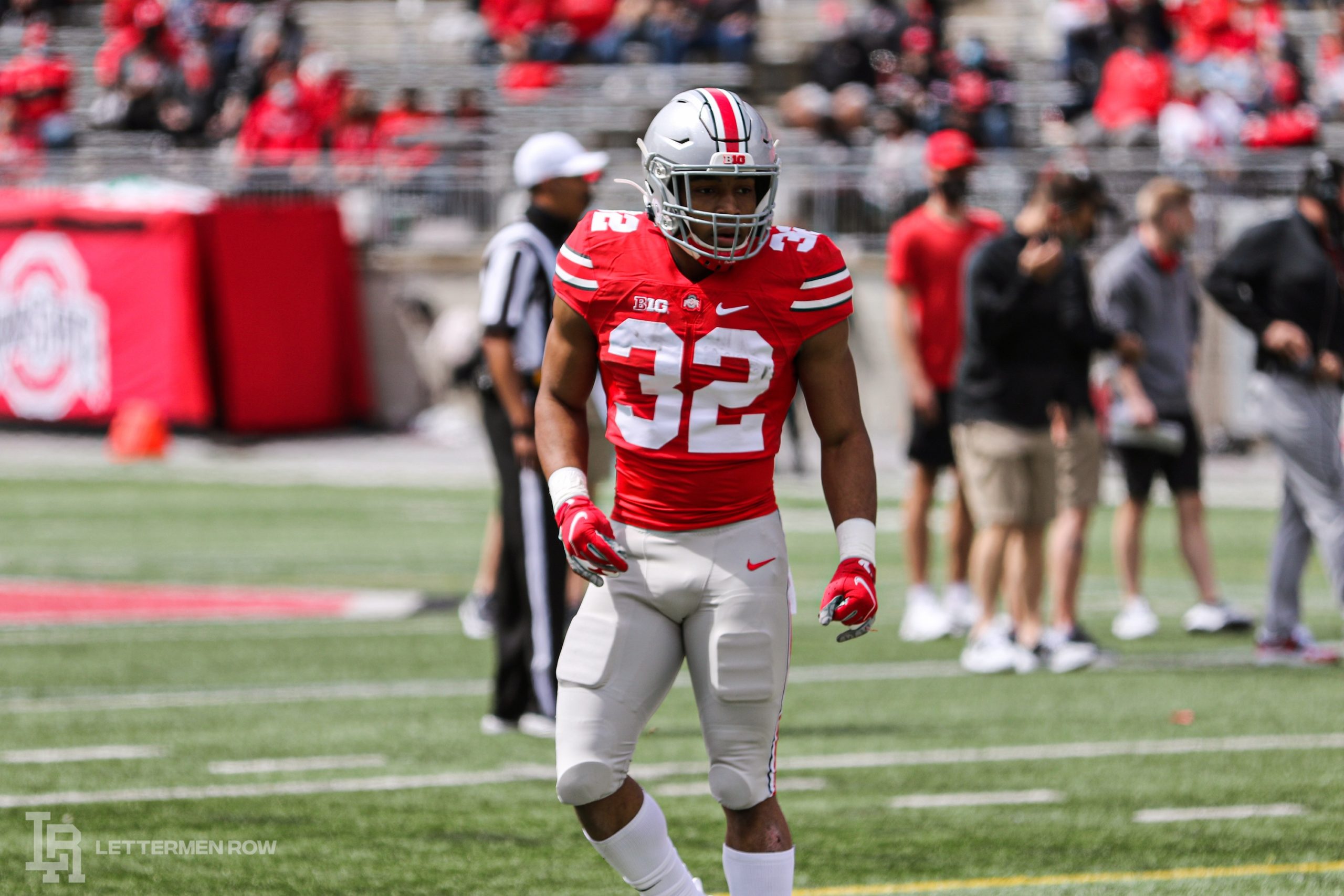 Ohio State freshman TreVeyon Henderson has a chance to start early in his career. (Birm/Lettermen Row)

The summer offseason is in full swing, and Lettermen Row is trying to survive it with our annual Position Week breakdowns. By the time all nine units at Ohio State have been covered, training camp and media days will nearly have arrived — and the return of football in the Horseshoe will be just around the corner. We’re continuing Running Backs Week by breaking down howTreVeyon Henderson can emerge as a star for Ohio State.

COLUMBUS — TreVeyon Henderson is among the top running backs to ever choose Ohio State out of high school.

His high-school highlight tape is tantalizing. His recruitment as the No. 1 tailback in the country for his class was quite public until the pandemic slowed it down.

Henderson doesn’t have much to hide — at all. But when he was asked what to expect of him as a running back early in his career by a member of the media, Henderson played it close to his Ohio State T-shirt. He’s not giving away any hints at what kind of back he’ll be this fall.

“I’d rather not talk about it,” Henderson said confidently during spring practice when he met with the media for the first time at Ohio State. “I’d rather just show it and let you all decide.”

Henderson has already shown what he can do with the ball in his hands. Although he didn’t play his senior season of football in his home state of Virginia, the five-star tailback had enough film to become the top back in his class, making him a can’t-miss prospect for the Buckeyes.

Now that he’s on campus, Henderson is in the mix with five other talented, highly-rated running backs on the Ohio State roster all vying to be the bell-cow back. So far, Henderson is showing what made him the headliner of the 2021 recruiting class. Henderson has even been impressive with the intricacies of the running-back position, not just with home-run ability and bursts of speed. 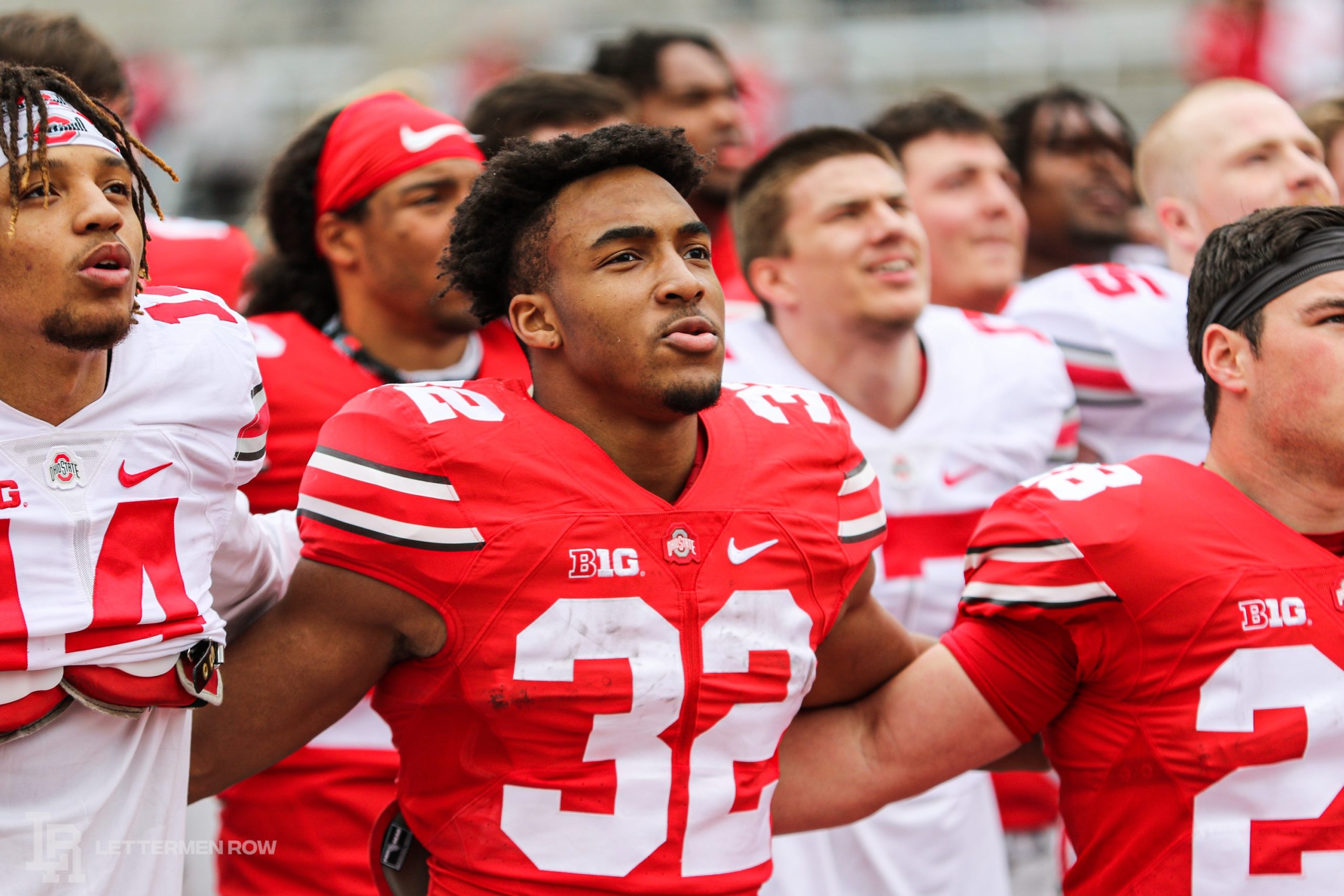 Ohio State running back TreVeyon Henderson has a shot to win the job this year. (Birm/Lettermen Row)

“I thought TreVeyon was very good with the football, which most running backs are who are talented like him,” Ohio State offensive coordinator Kevin Wilson said after spring practice ended. “But he really impressed me as a young player stepping up in pass pro, taking on some of our linebackers in the blitz pickup periods that we did, and he caught the ball – you saw that in the spring game [with five catches] — very well out of the backfield.

Maybe that’s why he already lost his black stripe and is beginning to stand out and pop in a room that also features incumbent back Master Teague, fellow freshman Evan Pryor, veterans such as Steele Chambers and Marcus Crowley and rising star Miyan Williams. 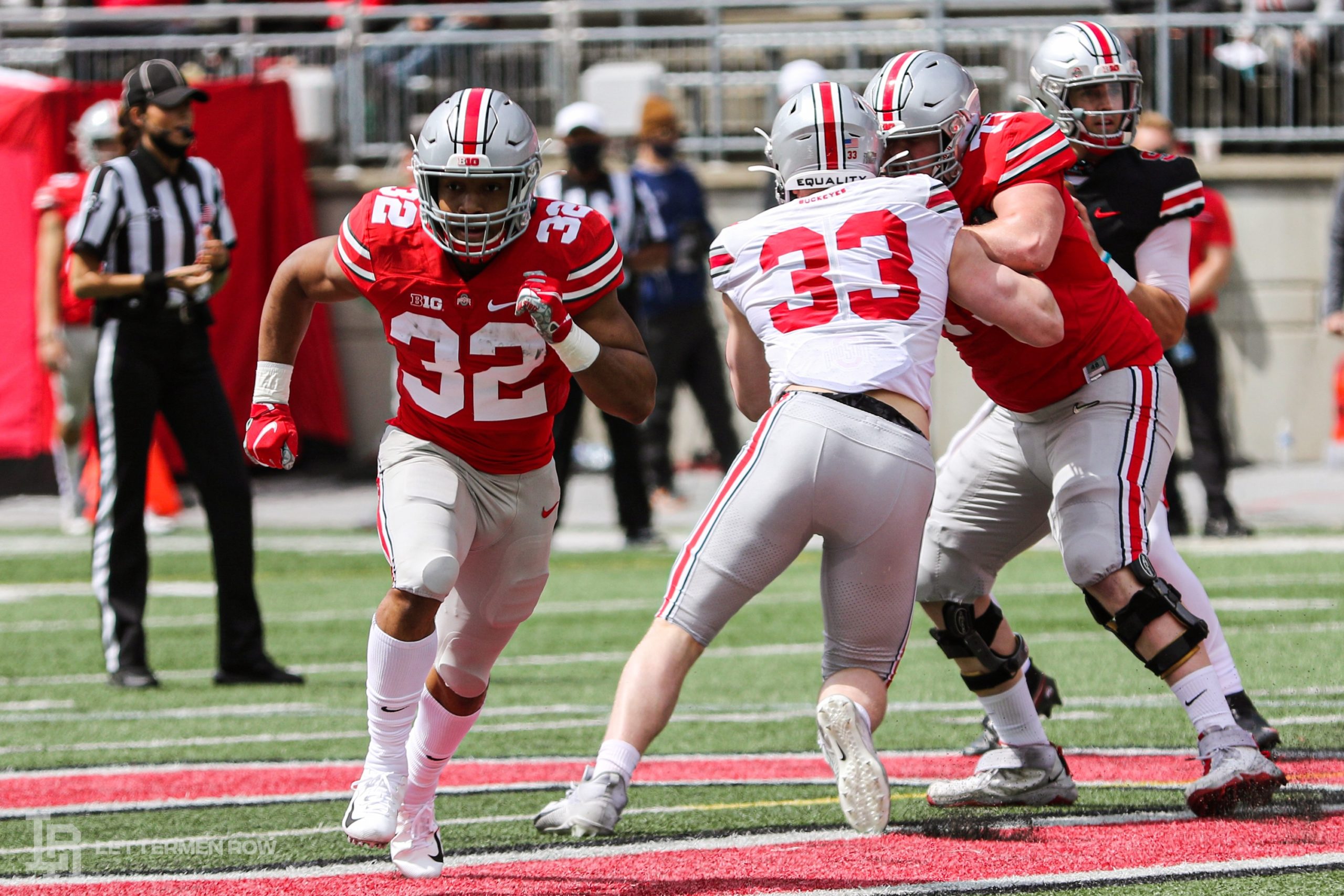 Henderson doesn’t fear the competition he stepped into in January when he enrolled with the Buckeyes. He thrives in that competitive environment. And the impending battle to become the starter for Sept. 2 at Minnesota won’t be too much for the 18-year-old superstar.

“I mean, we’re all great running backs,” Henderson said. “We’re competing a lot and making each other better.

As the Buckeyes make their way through summer workouts, Henderson continues to emerge as a potential breakout star. He wouldn’t be the first freshman back to burst into action for Ohio State. But he has a chance to be one of the best first-year running backs to play at Ohio State.

He won’t give away what makes him special. Henderson is making everyone wait to see for themselves once the Buckeyes take the field this fall and he gets the ball in his hands. In the meantime, he’s happy with his progress through spring and into summer.

“I’ll actually be honest, I think I’ve been doing a great job,” Henderson said. “I just need to stay consistent with that.”

From there, TreVeyon Henderson is going to keep grinding toward playing time in the Ohio State offense. And he’s going to let everyone watching decide how good he can become.