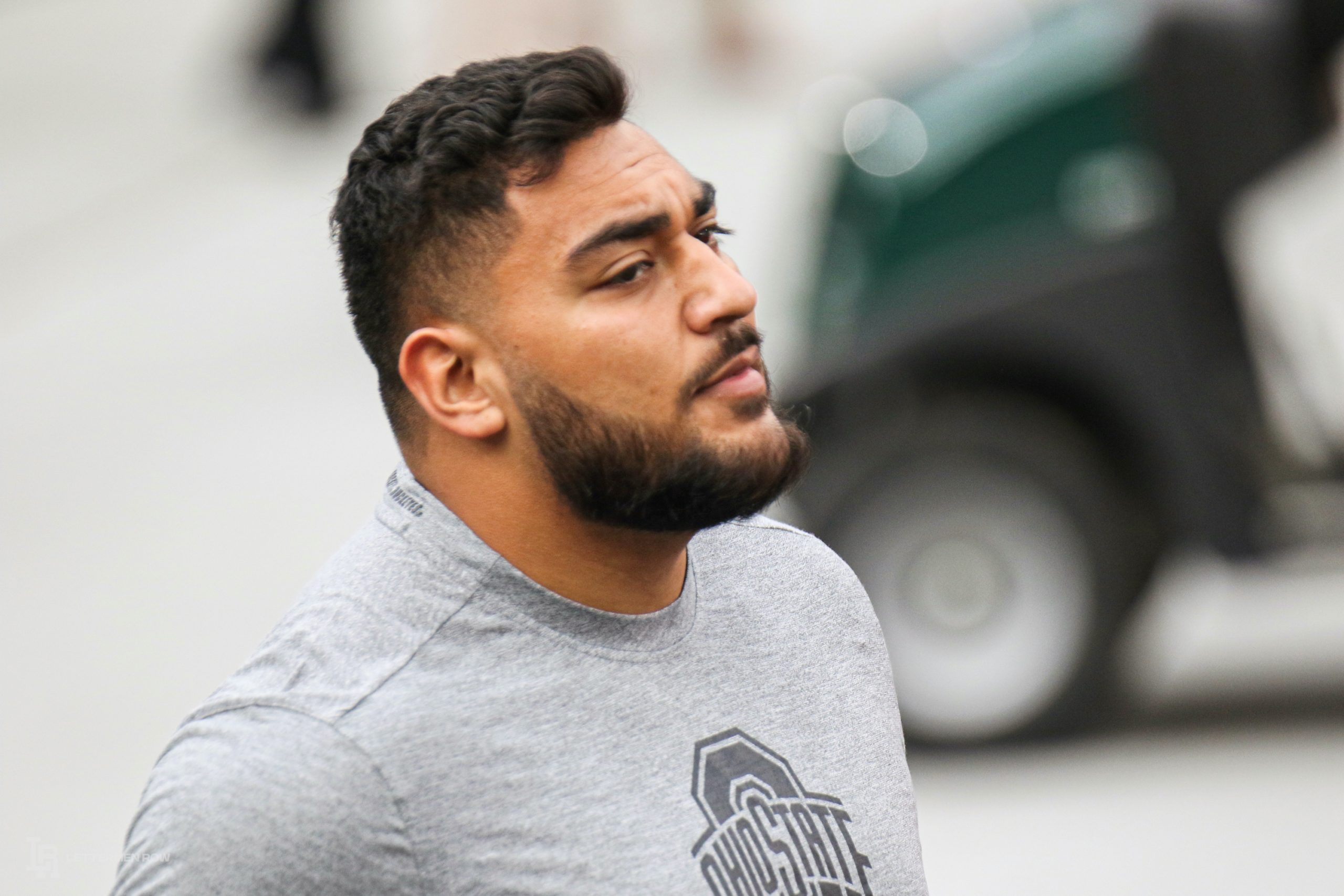 COLUMBUS — There are no restrictions on Tommy Togiai now.

The strongest man at Ohio State has generally been throttled back when it was time to bench press in the Ohio State weight room with Mickey Marotti capping the number of reps for for the rock-solid defensive tackle. But Togiai will be fully unleashed on Tuesday after at the Woody Hayes Athletic Center during Pro Day — and he’s planning to completely empty the tank.

Togiai has his sights locked on the all-time NFL Draft bench-press record, and every time that bar loaded up with 225 pounds goes up both his stock and his charitable giving will too.

“I mean, I’m going to try to break the record [of 49 reps],” Togiai told Lettermen Row over the weekend. “I’m looking at maybe 40, 45 or somewhere in there — but I’ll try to go for that record if I can. I think it’s pretty realistic, I think I can get close to it or even break it.

“But it’s also always great to be able to have a chance to give back to the community, so that’s No. 1 for me. I just wanted to be able to do that for the community that’s welcomed me, supported me throughout my time here. Plus there’s a part that is for myself. I want to show people what I can do and go out and try to do it.” 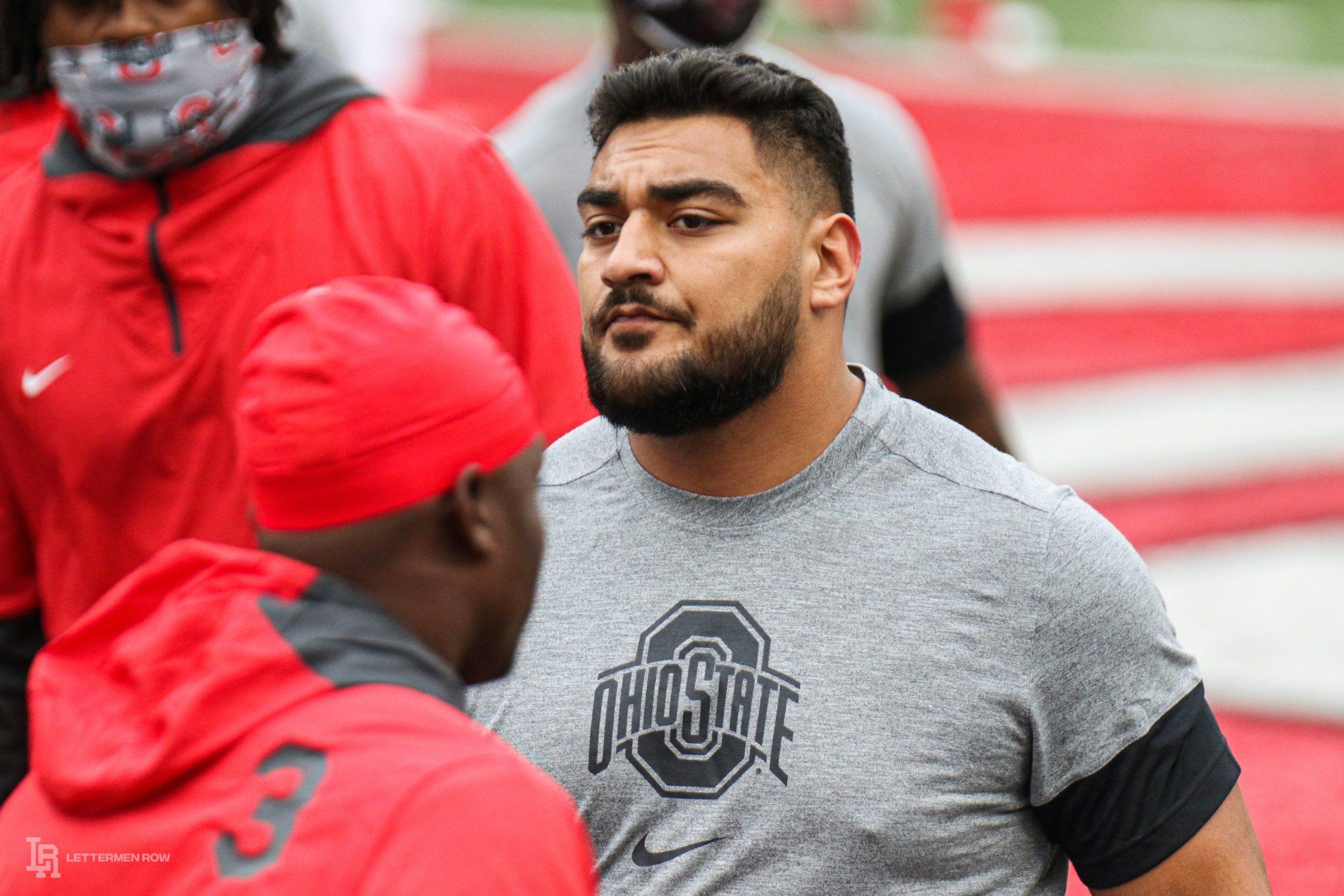 The personal rewards with a big performance are obvious at Pro Day with representatives from every NFL team expected on campus on Tuesday. The value of the workouts in the Woody only increased when the traditional Combine in Indianapolis was cancelled due to COVID concerns, robbing Togiai of a previous chance to flash his raw power and underrated mobility as he tries to climb draft boards as an interior defender.

But Togiai didn’t want it all to be just about him, which is why he partnered with Ohio State’s Lifesports Initiative designed to give back and assist youth activities in Columbus. Togiai opened up a pledge drive for fans who wanted to match his donations on every rep as well, using his unique combination of power and platform to try to make a difference in the community.

“That’s something we talk about in recruiting,” Ohio State coach Ryan Day said. “Their values of compassion and giving back and generosity is significant enough to the point where they’re giving back already. It means a lot to a lot of people. It goes to show you what type of people they are. But that’s why we talk about it in recruiting. We encourage that. You use the platform that Ohio State has provided to you to make a difference, whatever that is.

“These guys are doing that, which is great, because that’s what it’s all about.”

Togiai was robbed of his last chance to give back directly to the Buckeyes on the field, and that memory still hurts after he was forced to miss the national-title game due to a positive COVID test.

The junior had emerged into a game-wrecking force up front for Ohio State last season, forming one of the most tenacious tandems in the country alongside Haskell Garrett. The absence of Tommy Togiai was an undeniable setback for the Rushmen unit against Alabama, and in a roundabout way actually reinforced the idea that he was ready for the next level.

“Oh yeah, it hurt,” Togiai said. “When I first got the news that I was getting COVID, it was heartbreaking. I cried my eyes out. It was a frustrating time. It wasn’t even not being able to play. To not even be able to be in Miami with the team, to not be around my guys, that was the toughest part. 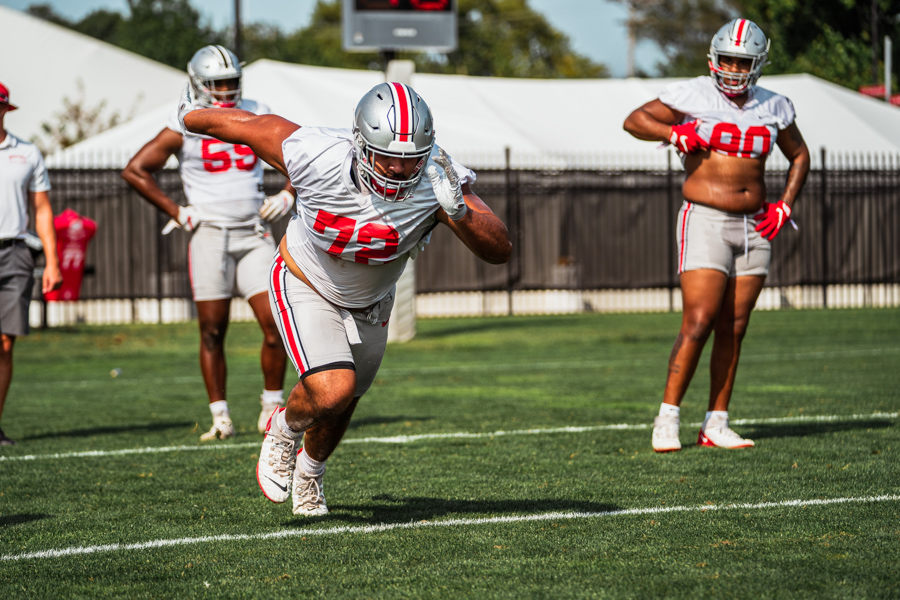 Tommy Togiai was a dominant force for the Buckeyes last year. (Courtesy/Ohio State Dept. of Athletics)

“But the national championship didn’t have much to do with my decision whether I was going to the NFL or come back to school. That wasn’t a factor. Mainly it was just based off my talks with my family and [defensive line coach Larry] Johnson and my own personal reasons.”

There is no turning back now for Togiai, and he’s been fine-tuning his freakish ability over the last two months all with an eye on Pro Day and a chance to make some history.

Togiai has other drills to do on Tuesday afternoon, and he’s intent on showing off his lateral movement and straight-line speed as well. But the spotlight will be on the bench, and this time nobody will be trying to limit his reps.

“After that one time my sophomore year, that was the last time I ever did 225 for real during my time at Ohio State, actually repping it out,” Togiai said. “I’ve been getting my body right for this Pro Day and getting really healthy, I’m feeling really good. That’s been the key for me now, but I’ve also been working on those drills and getting stronger a little bit and just keying on getting the techniques right for all the drills.

“I’ve shown what I can do. I believe in myself and I know I can play at the next level. … I’m betting on myself.”

And if he wins, Tommy Togiai will be sharing the spoils with the Columbus community.