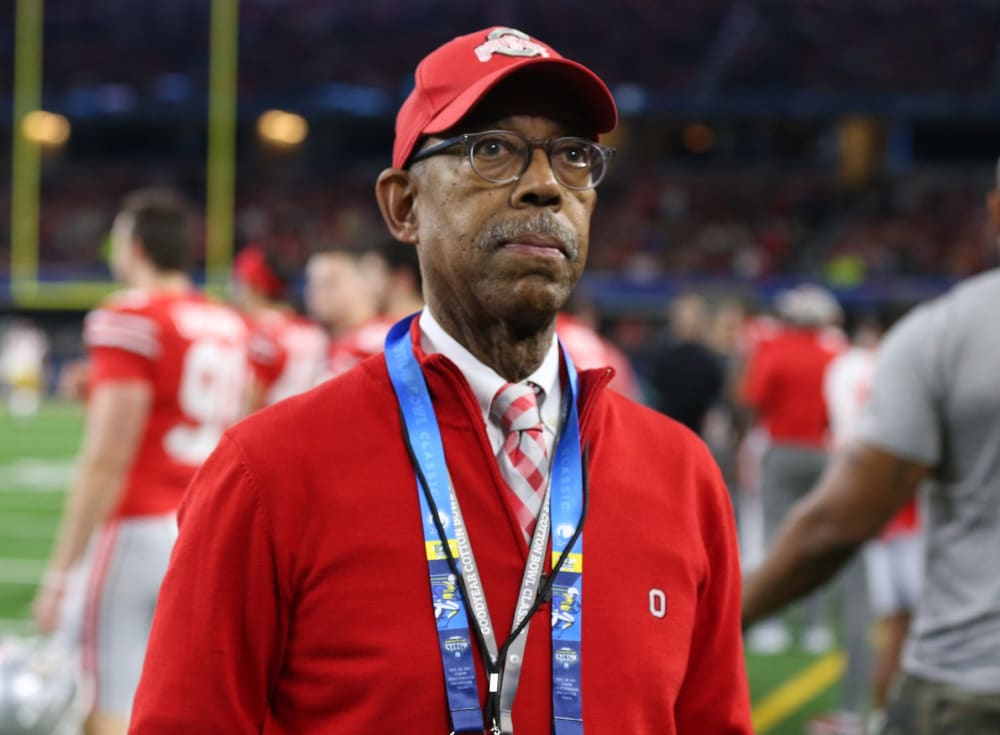 The investigation into Urban Meyer could last up to two weeks. (Aaron Doster/USA Today Sports)

COLUMBUS — The Ohio State investigation into Urban Meyer has come to a close, and a decision about the coach’s future is looming.

Lettermen Row is on campus providing full coverage and updates as they become available. Follow along here and catch back up on the entire saga as the Buckeyes determine the facts and set a course moving forward either with or without the championship-winning coach.

9:00am: The Ohio State Board of Trustees convene a morning meeting to discuss the results of the independent investigation and how it will proceed with Urban Meyer’s future with the program. After a brief public roll call, the members go to a closed, executive session to review the facts and discuss the options moving forward for the Buckeyes.

9:42 a.m.: Urban Meyer is spotted entering the Longaberger Alumni House ahead of the private executive session for the board.

JUST IN: #OhioState Coach Urban Meyer is in the building where the trustees are deliberating his future. He was seen entering a short time ago https://t.co/kinC9NvFbx pic.twitter.com/4c46tSuOl6

1:30 p.m.: A school spokesman indicated the meeting could drag on through the afternoon and there was no guarantee a decision about Urban Meyer would be made on Wednesday. With reporters alternately standing outside a room that appeared prepared for a press conference and by Meyer’s car, the Board of Trustees orders pizza.

4 p.m.: While the meeting at the Alumni House passes the seven-hour mark, across the street the Buckeyes hit the practice field.

Meanwhile … across the street, the Buckeyes are now on the practice field. pic.twitter.com/pLiZSbBI3R

5:04 p.m.: Athletic director Gene Smith arrives at the Alumni House. The school remains silent about any of the deliberations or a possible timeframe for a decision.

6:47 p.m.: The wife of Ohio State’s President Michael Drake, Brenda, arrives for continued discussions. There have been no updates on what to expect as far as a decision.

Full timeline of events below.

2002: With Meyer in his second season at Bowling Green, Smith walks on to the team as a wide receiver. Meyer departed after that season to coach Utah for two seasons.

Dec. 4, 2004: After leading Utah to an unbeaten season, Meyer is hired by Florida. Smith comes with him as a quality control coach and becomes a graduate assistant in 2007. He remained with the Gators until the 2010 season, when he was hired as the wide receivers coach at Marshall. 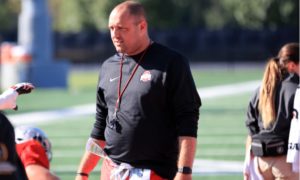 June 21, 2009: The first documented allegation of abuse between Zach and Courtney Smith takes place. On the Smith’s one-year anniversary, an argument escalated after Zach came home from a night of drinking with co-workers. Courtney told Stadium that Zach picked her up by her shirt and threw her up against a wall. Zach was handcuffed and arrested.

June 29, 2009: Courtney Smith dropped the charges against Zach Smith. She told Stadium she was pressured to drop the charges by Zach Smith’s attorney (who also represented Meyer and University of Florida players as needed), Zach Smith’s mother and Earle Bruce, the latter two of which had driven down from Ohio to Gainesville to speak with her.

“I was basically told if you don’t drop the charges, he’ll never coach again,” Smith said.

February 2014: After leading the recruitments of Jalyn Holmes and Johnnie Dixon and also landing Noah Brown and Terry McLaurin, Smith is named the Big Ten recruiter of the year by both Scout.com and Rivals.com.

Oct. 25-26, 2015: Another alleged instance of abuse took place between Zach and Courney Smith. Here’s how McMurphy described it in his report:

Zach came by her house, an argument ensued and then Courtney said he assaulted her.

“He took me and shoved me up against the wall, with his hands around my neck,” Courtney said. “Something he did very often. My (then 3-year old) daughter was clinging to my leg. It obviously registered with him what he was doing, so he took my (then 5-year old) son and left. So I called the police.”

Since Zach had already left, Courtney told the police not to come to the house because she had to calm her daughter down and put her to bed. The police said since Zach had left, they could come out the next day or she could come by the station the next morning. The report was officially filed on Oct. 26, 2015.

Nov. 9, 2015: Police respond to a claim of menacing by stalking, but no charges are filed against Zach Smith.

May 12, 2018: Zach and Courtney Smith have a dispute stemming from a disagreement over dropoff location for their children. Zach Smith had dropped them off at Courtney’s house, which he wasn’t supposed to visit. Zach Smith was cited with misdemeanor criminal trespass.

July 18, 2018: Zach Smith appears in Delaware County Municipal Court to respond to the aforementioned criminal trespassing charge from May 12.

July 23, 2018: Ohio State fires Zach Smith. Earlier in the day, McMurphy posts a story that goes into detail about the domestic violence civil protection order that had been filed by Courtney against Zach.

July 24, 2018: Meyer speaks at Big Ten media days, where he claims to have known about the 2009 incident and reported it to his superiors but did not know about what happened in 2015. “I got a text late last night something happened in 2015. And there was nothing. Once again, there’s nothing — once again, I don’t know who creates a story like that,” he said.

“The special working group will direct the work of the investigative team and be available to provide consultation and advice and assist with communication to the full board on the matter,” a release from the university said.

Aug. 3, 2018: Meyer breaks his silence with a statement posted to his Twitter account. He said he did know about the 2015 incident involving Zach Smith but also claimed he followed proper reporting protocols in terms of telling his superiors.

Aug. 5, 2018: The group appointed to direct the investigation of Ohio State head coach Urban Meyer announced late Sunday night that it expects the process to conclude within two weeks.

“Ohio State is committed to a thorough and complete investigation,” committee chair Jo Ann Davidson said. “We look forward to sharing the results of this investigation and any action the university may take.”

Aug. 9, 2018: Former newspaper reporter Jeff Snook posts on his Facebook page an extensive interview with Zach Smith’s mother, Lynn Bruce, calling into question Courtney Smith’s allegations and motive. Bruce recounts Courtney Smith making comments as early as 2013 suggesting she would be seeking some revenge against Ohio State after Zach Smith cheated on her.

“When she found out five years ago that Zach had cheated on her, she was so angry that she vowed to me she would get back at him someday,” Bruce said. “And she said she would take Urban down, too.

Additionally, Bruce says that Tina Carano, Courtney’s mother does not believe that Zach ever struck Courtney.

Herman responds via a school spokesperson to the Austin American-Statesmen: “It is absolutely untrue. Neither I nor anybody in my family has ever communicated with Brett McMurphy about the situation at Ohio State.”

For those who have asked for my response to Jeff Snook’s claim Saturday: “I have never revealed my sources in my nearly four decade journalistic career & I am not going to start now. However, I will say unequivocally that Tom Herman was not my source.”

Aug. 13, 2018: Courtney Smith meets with the investigating team hired by The Ohio State University Board of Trustees.

Aug. 14, 2018: Zach Smith’s attorney, Brad Koffel, releases a statement via text message to 105.7 The Zone that Smith met with the independent investigative team. 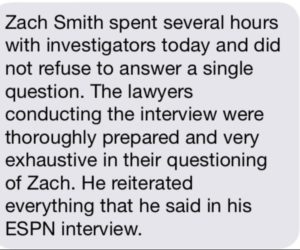 Aug. 16, 2018: University President Michael Drake provides an update to the investigation in an interview with WOSU’s All Sides, stating that the original two-week timeline for a resolution “is the goal” but “it will be finished when it’s finished.”

Following receipt, the working group will share the report with the Board of Trustees in an executive session to be held next week. As required by law, public notice of the meeting will be released at least 24 hours in advance. Following deliberations with the board, and appropriate time for consideration, President Michael V. Drake will announce his decision.”

The investigation is led by former Chair of the U.S. Securities and Exchange Commission Mary Jo White. White is a senior chair with the national law firm Debevoise & Plimpton and is also a former U.S. Attorney for the Southern District of New York.

Aug. 20, 2018: The Ohio State Board of Trustees executive session to discuss the investigation is scheduled for Wednesday at 9 a.m.