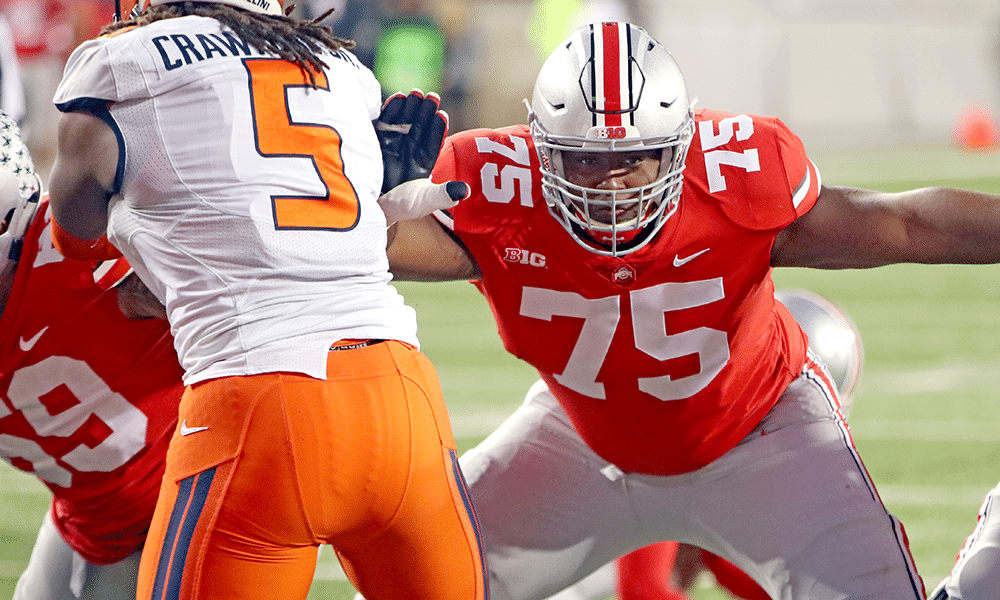 Thayer Munford is being counted on heavily by Ohio State this season. (Birm/Lettermen Row)

The speculation, debate and conversations about Ohio State never end, and Lettermen Row is always ready to dive into the discussions. All week long, senior writer Austin Ward will field topics on the Buckeyes submitted by readers and break down anything that’s on the minds of the Best Damn Fans in the Land. Have a question that needs to be tackled, like the one today on Thayer Munford? Send it in right here — and check back daily for the answers.

Prediction for Thayer Munford: better, worse, or about the same as true sophomore Isaiah Prince in 2016?

Growing pains are just part of the deal for new starters on the offensive line. And in case Thayer Munford needs any reminders of that this season or tips on how to deal with it, all he has to do is ask the guy on the other end of the offensive line at Ohio State. Isaiah Prince has been in the exact same position Munford is in now, claiming a starting job as a sophomore and perhaps not being fully prepared for the pressure that will come with trying to protect the quarterback for the Buckeyes.

Or he could go back and watch Taylor Decker struggle in his debut. Or call his old teammate Billy Price and see what it was like when he was taking some fire for not instantly playing like an All-American when he was thrust into the lineup. The point is, playing in the trenches isn’t easy — and development doesn’t usually happen without learning some painful lessons. 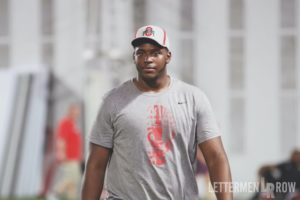 Thayer Munford will no doubt have to deal with growing pains at some point. (Birm/Lettermen Row)

So, yes, Munford is probably going to get beat a few times. And it will be obvious to everybody given his prominent role at left tackle and the responsibility he has to help make another transition into the lineup as easy as possible for Dwayne Haskins. But based on the limited sample size of reps available, the fantastic spring camp that solidified his spot in the lineup and the maturity the coaching staff has seen in him all along, Munford looks more than capable of delivering the kind of season Ohio State needs.

Prince has made it no secret how difficult the struggles were to handle physically and mentally two years ago. There is also no hiding just how poorly he was playing in games like the loss at Penn State. For whatever reason, it seemed to take him longer to get through his learning curve than some others before him. Of course, Ohio State is in the rock-solid shape it is in now on the offensive line because he eventually used those moments to fuel his improvement, and it knows that some patience is required to fully tap into the potential of guys playing such a challenging position.

Training camp isn’t even a week old yet, and the Buckeyes have still not even spoken publicly about the work that’s been done on the field. The bar is pretty low to be more productive than Prince was a couple years ago, and the way Decker responded from his rocky start sits on the other end of the spectrum for Ohio State. But if a bet has to be made right now, the odds favor the latter and Munford becoming a cornerstone blocker by the end of the year.