Connect with us
Ohio State left tackle Thayer Munford is sitting out this spring as he recovers from injuries. (Birm/Lettermen Row)

COLUMBUS — The spot in the lineup is already secured, and Thayer Munford probably didn’t have as much use for the practice reps as the other guys on the Ohio State offensive line.

That doesn’t mean the Buckeyes or the returning junior wouldn’t have preferred to have the left tackle on the field this spring instead of on the sideline recovering from nagging injuries. But it’s pretty easy to see the silver linings for a revamped unit as it works without him heading into the final week of camp, particularly since there’s no reason to be concerned about his availability by the fall.

If Ohio State can give his snaps in March and April to some guys without starting experience to bolster the depth, help evaluate a battle at right tackle and ensure that Munford can be at full speed when it really matters, it can certainly live without him for a couple weeks now.

“Oh yeah, we’re still fighting it, there’s no question,” Ohio State offensive line coach Greg Studrawa said. “With Thayer being out this spring again, that’s another blow to the guys. But the good news is that those young kids get a ton of reps, and that’s what have this spring is a chance to get those guys as many repetitions as they can get to get better.

“Then we’ll get Thayer back in the fall and move forward.” 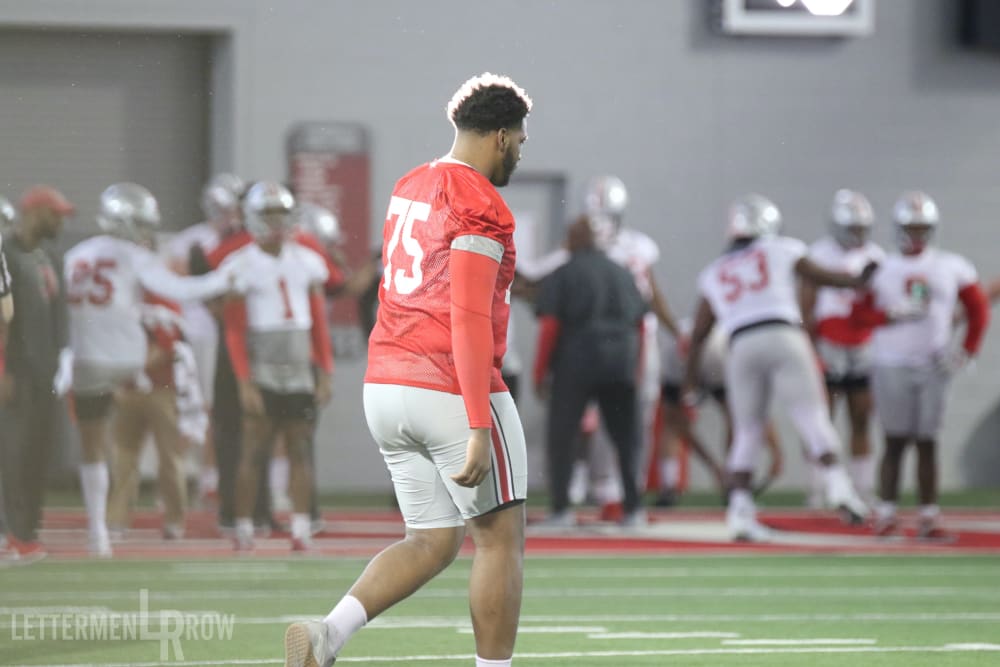 Ohio State left tackle Thayer Munford has been held out of spring camp for the Buckeyes. (Birm/Lettermen Row)

Reaching maximum potential for the Buckeyes will require Munford’s presence back on the offensive line, and he offered plenty of reminders a year ago during his first season as a starter about just valuable he can be. And the fact that Munford could keep going out and delivering for Ohio State while not even close to full strength thanks primarily to a hip injury continues to bode well for his future once that issue is in the rearview mirror.

How can Thayer Munford continue to get better? What did he show late in the season even while playing through an injury? How will his return impact the rest of the Ohio State offensive line this year? Former Buckeyes offensive tackle Reid Fragel was back in the Lettermen Row film lab breaking down Munford and projecting what’s next for the big man and a revamped unit in the latest episode of BuckIQ.

Ohio State: What We Learned from Ryan Day heading into end of camp
Ohio State: Can another walk-on emerge as contributor for Buckeyes?
Advertisement