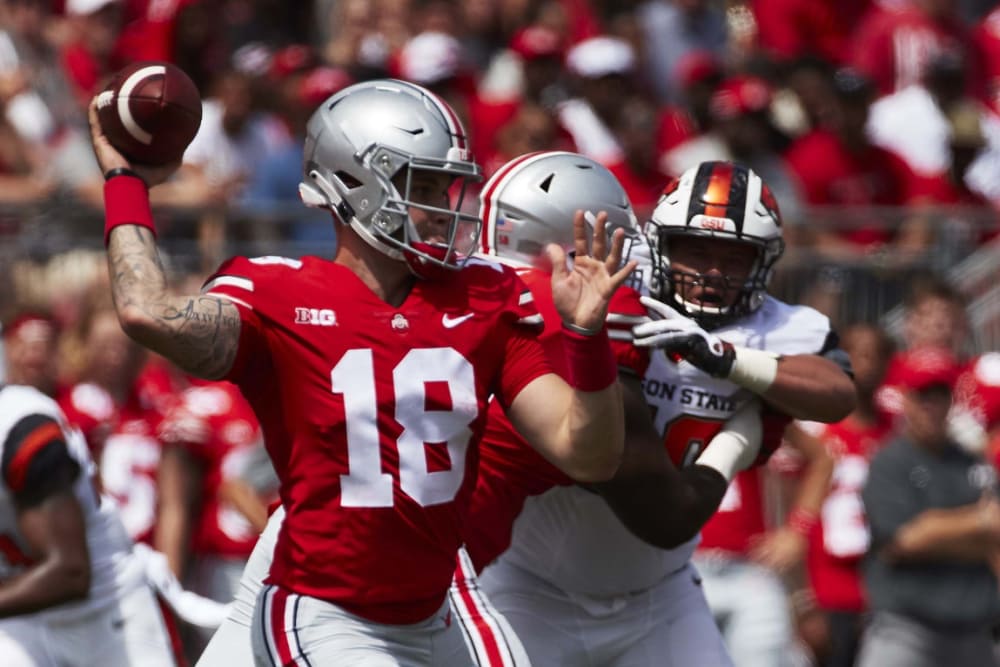 Tate Martell came off the bench for some action in Ohio State's opener against Oregon State. (Rick Osentoski/USA TODAY Sports)

The speculation, debate and conversations about Ohio State never end, and Lettermen Row is always ready to dive into the discussions. All week long, senior writer Austin Ward will field topics on the Buckeyes submitted by readers and break down anything that’s on the minds of the Best Damn Fans in the Land. Have a question that needs to be tackled, like the one today on Tate Martell? Send it in right here — and check back daily for the answers.

What’s the plan for Tate? Is he going to be mop up duty, or they going to try and get him series when it matters? Whatever they did Saturday, wasn’t ideal imo

Tate Martell can create magic with his athleticism, he’s exciting to watch with the football in his hands and he is a key part of the roster both now and into the future at Ohio State. The redshirt freshman also needs reps as an inexperienced backup quarterback who’s only a play away from potentially needing to take over the offense — and might be a season away from having to replace Dwayne Haskins if he leaves for the NFL.

But Ohio State doesn’t need to come up with a special package to get Martell involved. There are more than enough weapons already on the field at any given time thanks to a roster that is overflowing with talented skill-position players, and Haskins is a handful for defenses without needing any relief off the bench. If anything, attempts to try to play both seem to come with more downside than potential benefits.

Sure, the two have different styles, which tends to open the door for creativity from the coaching staff — especially with somebody who can be as electrifying as Martell. But Ohio State wasn’t exactly suffering from a power outage with Haskins cruising into the second quarter of his record-setting debut, and tossing Martell out for a couple plays didn’t do anything but set up a third-and-long for Haskins to trot back out and convert. Even with Martell’s ability to pass, the Buckeyes felt predictable when he took the field, much like they have in the past when they experimented with using dynamic athletes like Braxton Miller as a change-of-pace taking snaps. 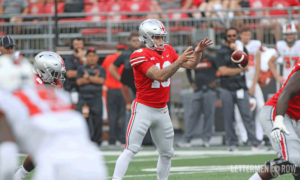 Tate Martell is a key part of the future for Ohio State at quarterback. (Birm/Lettermen Row)

Granted, Martell getting stopped for no gain on one play is the ultimate small sample size. And if Ohio State continues to incorporate him in the game plan as more than just a backup quarterback, perhaps the value will grow along with his experience. It just seems disruptive for both Haskins and the offense as a whole to mess with the chemistry or rhythm leading the attack, particularly since the Buckeyes have so many other ways to generate yardage and put stress on a defense. It also feels like it would possibly be more worthwhile for Martell’s development as a quarterback to focus on his duties as a backup and not waste time or energy with a gimmicky set of plays.

“I think it will change as we go into each week and what we see with the defense,” acting Ohio State coach Ryan Day said. “We want to kinda get [Martell] in the game. How it plays out, can’t really predict how that’s going to work, but we definitely want to get him in the game and let him go play.”

That’s understandable, of course, and the Buckeyes surely have their reasons for putting Tate Martell on the field whenever they do it.

But from the outside, the attack seems plenty potent enough under Haskins without any extra bells and whistles needed at quarterback.