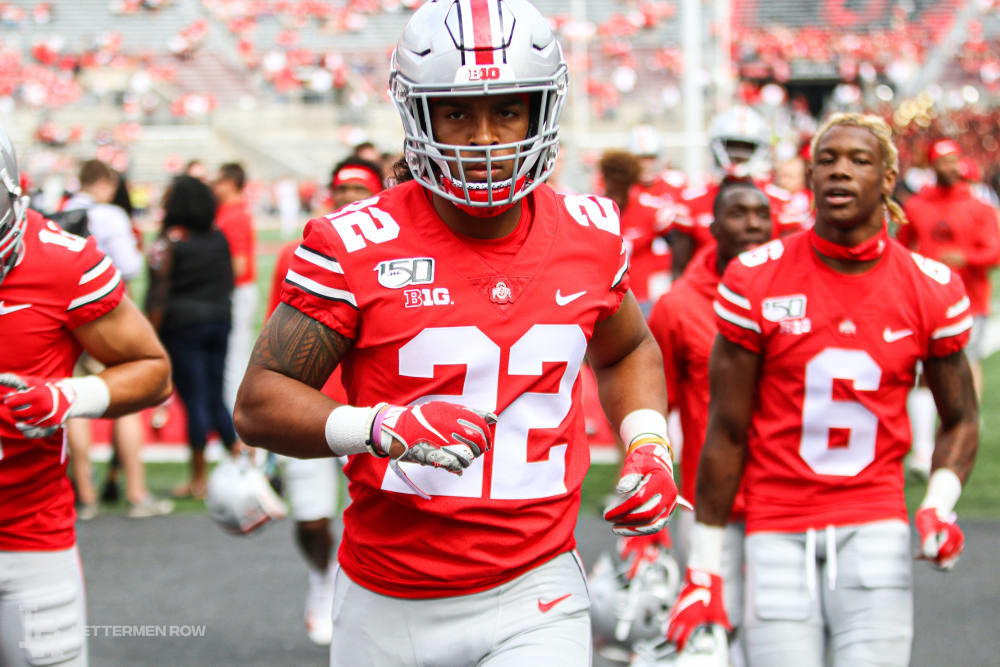 Steele Chambers had a chance to shine this spring before practice was postponed. (Birm/Lettermen Row)

Ohio State had one of the best seasons in program history last year, and it came with the help of some young players. Now as the younger Buckeyes enter another year for the Buckeyes, they may be expected to take on expanded roles. Lettermen Row is breaking down a play from each key inexperienced Buckeye and how it can help provide a glimpse into each of their futures. Next up: Steele Chambers and how he can provide depth to the Ohio State running back room.

COLUMBUS — Steele Chambers had a huge opportunity during spring practice for Ohio State.

Before the global pandemic put a hold on Ohio State’s spring practice schedule, Chambers was the only healthy scholarship running back. J.K. Dobbins left for the NFL after a brilliant career. Marcus Crowley is rehabbing from an injury sustained in November. Master Teague hurt his achilles during the first practice of the spring. Trey Sermon and Miyan Williams can’t join the team until June.

So Chambers was headed toward every rep imaginable during the spring. But then practice got postponed or canceled — that’s still to be determined. And now, when the Buckeyes return to the practice field, Chambers may not have the lion’s share of carries. So he has to lean on what he learned last season when he saw limited action.

“It was pretty interesting — kind of some ups and downs, of course, because it’s hard being a freshman,” he said of last season when Lettermen Row spoke to him after the Big Ten title game. “I have some great leaders ahead of me, and I’ve been able to learn a lot from them. As the year went on, it kind of built up, just being able to watch some of the guys that I’m playing with, just knowing I’m on the same team as them, it’s amazing that I’m able to compete with some of these guys.”

Now Chambers is working to get bigger, faster and stronger despite not being at the Woody Hayes Athletic Center. And he’s looking to build off the carries he received last season in blowout games and mop-up duty.

If he can continue to show small steps of improvement after some impressive moments last season when he did receive the ball, Chambers could boost the running back room and provide good depth for Tony Alford and Ryan Day.

The play: It was already a 65-point game. Chambers had a few carries, but he hadn’t done anything noteworthy until just when heavy rain came down as Ohio State was wrapping up a blowout win over Miami (Ohio).

Steele Chambers can provide depth for the Buckeyes.

The freshman Chambers got the ball from backup quarterback Gunnar Hoak and swept around the right side, bounced off a tackler and found some daylight for a 15-yard gain. Later on the drive, Chambers punched in his first-career touchdown just before the game was called for lightning.

Maybe it wasn’t anything spectacular, but the 15-yard run — coupled with the 13-yard carry that ultimately set up the touchdown — was an impressive showing of how good Chambers could one day be for the Buckeyes. That was only a few weeks into his freshman season.

If he keeps building off the little moments like that, he could wind up providing good depth and a change of pace for the Buckeyes backfield in the future.