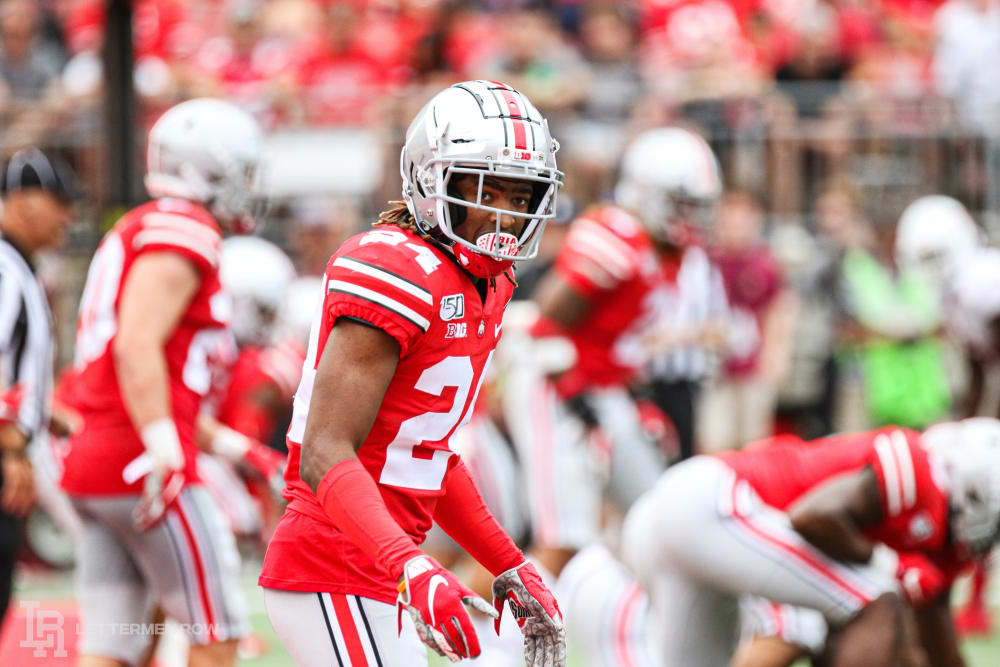 Ohio State defensive back Shaun Wade is emerging as one of the top playmakers for the Buckeyes. (Birm/Lettermen Row)

COLUMBUS — Shaun Wade will line up anywhere for Ohio State.

He’ll do anything from firing around the edge on a blitz to dropping into coverage as a deep safety. He’s equally willing to play lockdown coverage as a cornerback or come up deliver a huge hit stopping the run. And through two games, the ultimate chess piece in the Ohio State secondary is flashing the kind of big-play potential that has been hinted at for a couple years since the redshirt sophomore arrived.

Just about the only thing missing so far during his emergence with the Buckeyes? A better conversion rate for all the turnovers he’s been setting up teammates either by forcing a fumble or popping passes into the air for potential interceptions.

“I’m OK making the hits, and as long as somebody catches the ball, we’re good,” Wade joked after practice on Wednesday at the Woody Hayes Athletic Center. “The only thing I’m thinking about is making a play to help this defense. I know I can do more, and I feel like everybody can do more.

Wade is giving the Buckeyes plenty of them already as part of the defensive overhaul, and he had that mantra running through his head on the way to the quarterback for a strip-sack fumble in the win over Cincinnati on Saturday. He also had the same thoughts when he blew up a short pass and nearly set up Chase Young for an interception — which, like that fumble, didn’t result in a turnover for Ohio State.

Finally, Tuf Borland turned another Wade deflection into a pick, giving him an unofficial assist on a stats line that probably doesn’t do enough credit to sum up his impact so far. Wade’s three tackles, one sack, two passes broken up and forced fumble might not seem like much, but the variety of ways he’s stuffing the box score are a reminder of his versatility for the Buckeyes.

“Everybody is playing with that swag. The coaches are making it easy. If you want to be the best defense, all 11 hats have to be to the ball, and that’s been the big emphasis. … I feel like every defense has a different type of swag, but we were thinking too much last year compared to this year. We’re playing faster, everybody is shooting like a gun out there — like a Silver Bullet is supposed to shoot.”

The next target is Indiana for Ohio State. And it’s becoming more clear every week that Shaun Wade is a guy the Buckeyes can count on to do his part.

Shaun Wade was one of a handful of Buckeyes who chatted with the media after practice preview the Big Ten opener against the Hoosiers. All video interviews are available on the Lettermen Row YouTube channel.