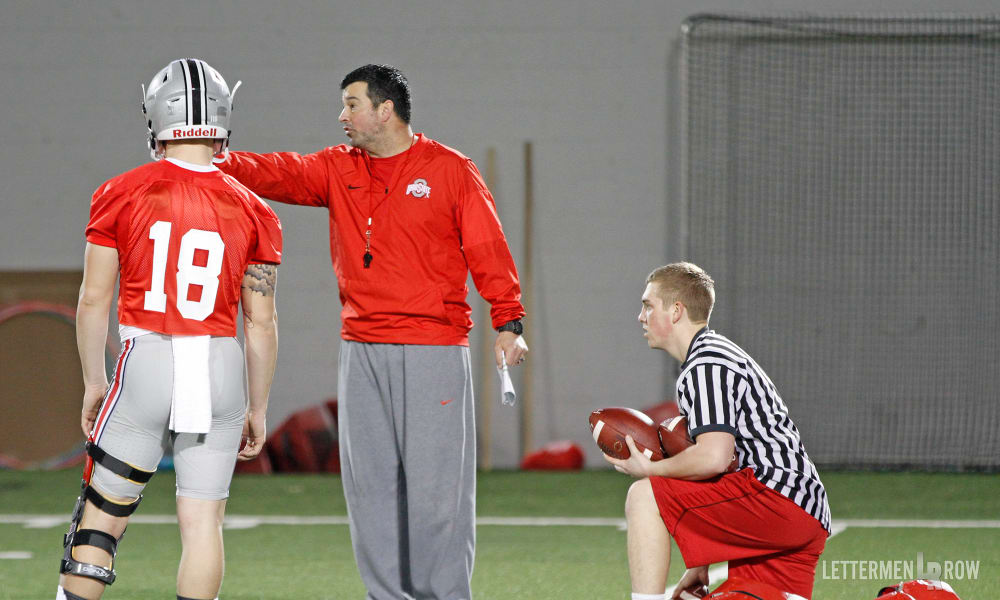 Ryan Day only needed one year to make his mark at Ohio State.

That’s all took for Day to become one the first million-dollar assistants in program history. All he needed to be promoted to offensive coordinator. And enough time be entrusted as the acting head coach of the Buckeyes while Urban Meyer is on paid administrative leave.

There’s good reason for that. The former quarterbacks coach for the San Francisco 49ers has coaching super-stardom written all over him.

Day has been on the field as a quarterback, named as captain during his senior season at New Hampshire. He threw for more than 7,500 yards in his career, when he starred for a then-unknown coach named Chip Kelly. After his career was over, Day moved into the coaching ranks the next season, making a stop at Florida in 2005 — where he first met Meyer as a graduate assistant before earning his first full-time job as a wide receivers coach at Temple in 2006. He returned to Temple in 2012 and at 33-years old became the Owls offensive coordinator. Two years later he was back with Kelly as the quarterbacks coach of the Philadelphia Eagles and followed him to San Francisco a year later.

It was that stint in the NFL where Day really dove into the position he once played, eager to become an expert on football’s most important position.

“The thing that I really wanted to do when I had an opportunity to go to the NFL with Coach Kelly was spend all my time on the pro passing game, all my time studying quarterback play, so I felt like I had some sort of expertise,” Day said in the spring of 2017. “That became quarterback play and the passing game. That’s really what I spent the last two years focusing on and spending time on. I just studied it the best I could.”

That’s why Urban Meyer, desperate to revamp a failing passing game following the 2016 season, turned to Day and former Indiana coach Kevin Wilson. It worked, too. Ohio State’s passing game, with fifth-year senior J.T. Barrett at the helm, went from No. 81 in the country during the 2016 to No. 36. Ohio State threw for more yards per game in 2016 than it had in all but one of Meyer’s previous five seasons in Columbus. Meyer wasn’t shy about giving credit to Day for some of that that improvement, especially new passing route concepts.

“Ryan Day brought us that whole [Mesh] package to us, and it’s been dynamic,” Meyer said last season.”The big hits we had against Indiana were the same package. So now about seven, eight different concepts off of that.”

As for his role in the offensive success in 2017 with the Buckeyes, Day downplayed it. But his approach may have been a little bit different than previous years when Ohio State appeared hellbent on forcing the ball to its top playmakers, rather than finding the open guy on any given plan.

“It’s all of our ideas, it’s all of our stuff, this is everybody’s work here,” Day said last year. “One thing about being [in the NFL] is that you have a lot more time to study the film. There isn’t the recruiting, there isn’t some of the other things that go on in the college game. You really can study that stuff, and understand some of the timeless passing principles that have stood the test of time. 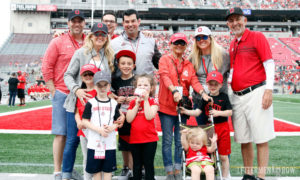 Family man Ryan Day has proven to be a skilled recruiter at Ohio State. (Birm/Lettermen Row)

“When you look at the film, you have to look at it through the eyes of what your players can do. Then make sure you’re picking the right things. I think that’s what our offensive staff is spending so much of our time doing. There are a million plays out there, we all can find a playbook. It’s trying to find the right plays that fit who we are. It’s like Coach Meyer said when we first got here, ‘If you know a play, we probably have run it.’ He’s right.”

Day’s willingness to adapt to players suggests his career arc is just beginning, no matter how long he’s in charge of the program while Meyer’s administrative leave is sorted out. It’s his laid back, player-first approach that has made him one of the Buckeyes most competent recruiters and one of his biggest advantages in a living room. He’s 39-years old, a family man with three kids and a wife and has a decade-plus of coaching experience with some of football’s best offensive minds behind him.

Ryan Day is a closer as a recruiter

He’s the right choice for right now, certainly, but he’s also a real choice for the future of the Ohio State football program as well.

“You can really talk to him,” 5-star 2019 wide receiver commit Garrett Wilson said. “It doesn’t ever feel like recruiting. He’s very natural and very comfortable.

That’s why Wilson told Lettermen Row that if Meyer were let go, Day taking over the program is the one move that would prevent him from examining other schools. That’s why Day was offered NFL jobs again this past off-season, and turned down an opportunity to be a college head-coach in the SEC after just one year running Ohio State’s offense. That’s why Meyer, who rarely gives up the role of play caller, surrendered many of those duties to Day last year and why it was expected he’d take on even more of that responsibility in  2018.

That’s why Day decided to stay with the Buckeyes this past January, many people began to point to him as a potential heir to Meyer’s throne at Ohio State. It doesn’t matter if that’s this season or five years from now. Day has the tools, talent and temperament to captain the ship — and the Buckeyes only needed a year to figure that out.

Get ready for Malik Harrison to become a star at Ohio State
Urban Meyer statement: Read the letter from the Ohio State coach