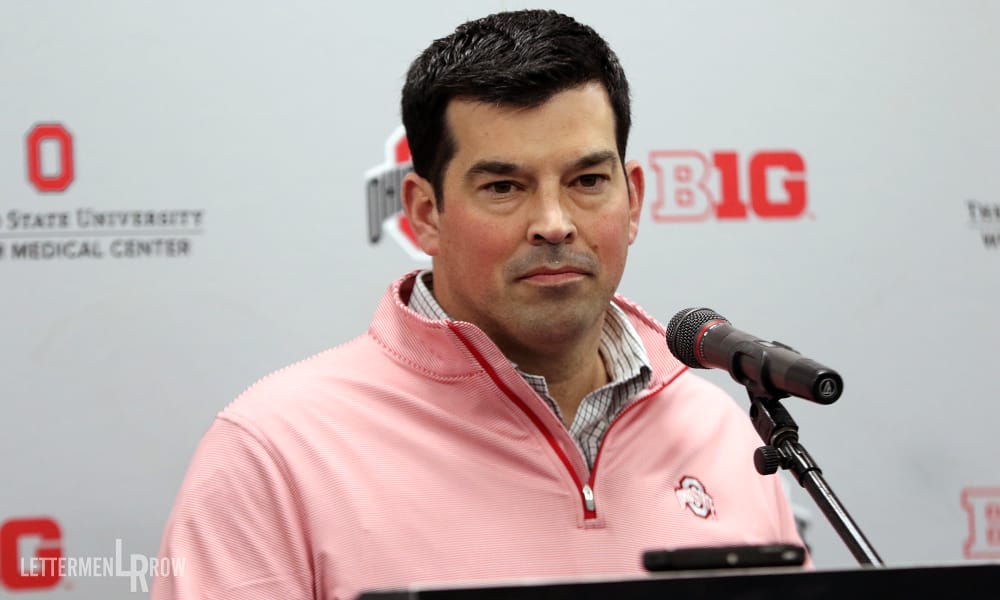 COLUMBUS — Even when Ryan Day flew out to Hawaii last month, the Ohio State coach still didn’t even slow down and take a second to relax.

After three hours on the island, the new leader of the Buckeyes hopped right back on a red-eye flight after an in-home visit with Enokk Vihami — a trip that both paid off with a four-star signature on Wednesday and was emblematic of his whirlwind first month in charge.

If the transition into the top job with the program has been like drinking from a fire hose, the water pressure still hasn’t let up yet as he now shifts to the offseason conditioning program, working with a revamped coaching staff and preparing for a spring camp that is already less than a month away.

“It’s been a sprint to this point, really haven’t stopped,” Day said. “It’s been a lot on the recruiting trail. But putting the staff together was a big part, too.

“I think I said this before, maybe even in the preseason [last year]. When you’re walking in these shoes, you notice things you didn’t notice before.”

All of that comes to Day’s desk now, and he’s been plenty busy as he takes over for Urban Meyer.

What all has he accomplished and what other key updates did he provide about the Buckeyes on Wednesday? Here’s what Lettermen Row learned from Ryan Day.

The Buckeyes are trying not to get too confident in the belief that Justin Fields will eventually be granted immediate eligibility to play this season. And the transfer quarterback himself is trying his best to ignore that when there is so much else on his plate. But that decision is hugely significant for Ohio State for a number of reasons. There’s a position battle and spring-practice reps to consider, the roster is already short one scholarship passer and could be down two if Fields isn’t cleared — and he’s also the highest-rated player ever to join the program, so obviously Day wants him ready to go.

“I think there’s nothing we can do about it right now,” Day said. “We’re trying to control what we can control, wait until the waiver comes back to find out where that’s at. That doesn’t change anything for him, Matthew [Baldwin] or Chris [Chugunov]. Once we find out what it is, we’ll go from there.” 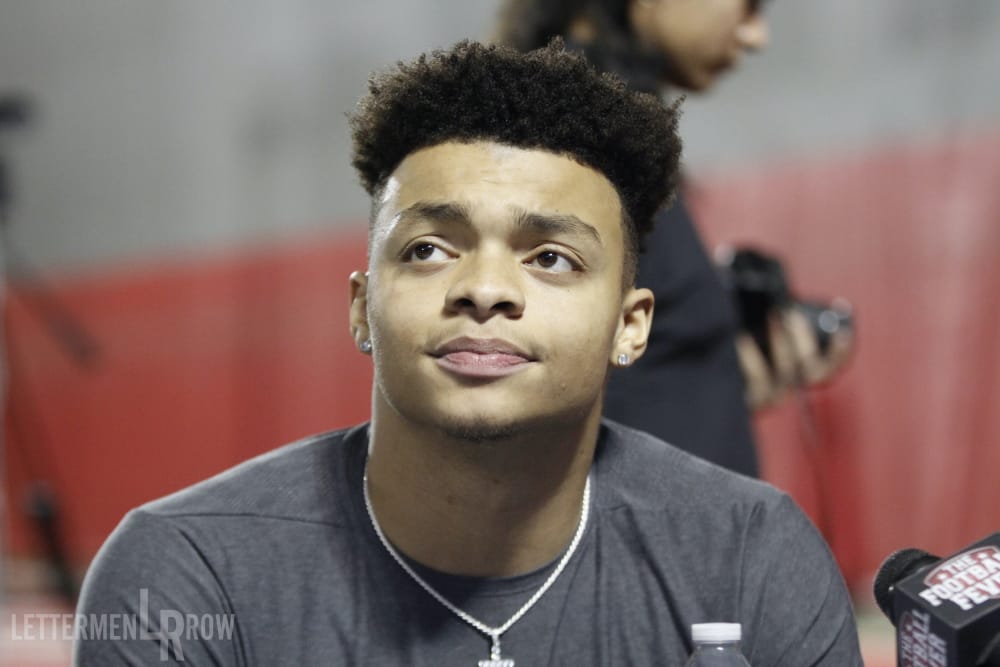 Ohio State is still awaiting word on the status of Justin Fields at quarterback. (Birm/Lettermen Row)

The most heated rivalry in college football doesn’t need any extra spice, but Day may have actually provided some by raiding Michigan to land respected assistants Greg Mattison and Al Washington. That wasn’t the intent, though, which Day made clear by pointing to his previous ties to both coaches and emphasizing that he would have sought them out in a national search no matter where they worked. And Day also acknowledged that he called Wolverines coach Jim Harbaugh to let him know he was pursuing the guys who would become the co-defensive coordinator and linebackers coach, respectively.

“I’ve got a lot of respect for the rivalry,” Day said. “That had nothing to do with anything other than trying to find the best guys. Al Washington’s dad played here, he’s from here. I was a coach when he played. He coached with me. These are guys that I’ve known.

“It wasn’t like I was going to try to cherry pick off of somebody’s staff. But I felt like those were the best guys for us.”

For all of his previous experience, ideas and knowledge of prolific passing attacks, Mike Yurcich is approaching his first couple months as the passing-game coordinator for Ohio State as a learning experience. So, just like Fields, the former Oklahoma State offensive coordinator is starting from scratch with the playbook as the program before he starts weighing in with suggestions — or acting like he knows everything he’s going to be teaching Fields and the quarterbacks. That approach to his job, along with his Ohio ties and success as a play caller, contributed significantly to why Yurcich was a prime target for Day to fill his old role on the staff.

“The fact that he came from Oklahoma State, had done really well as a coordinator calling plays for the last six years, wanting to be here, that was the second thing,” Day said. “He wanted to get involved with this offense, he wanted to be part of how we were throwing the football. He brings so much to the table.” 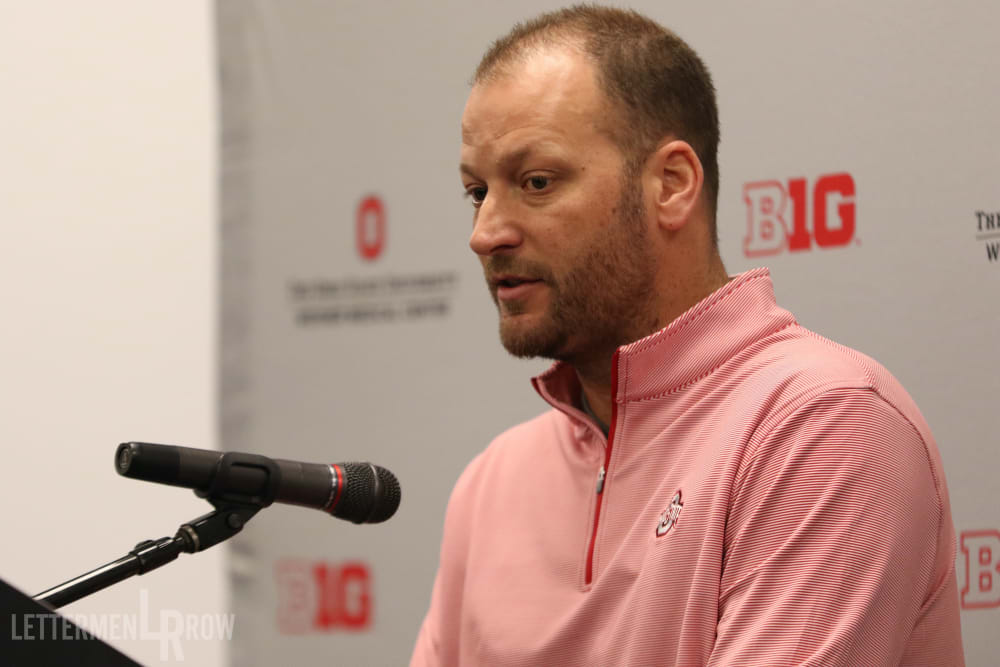 The rest of the defensive coaching staff changed around him, but Larry Johnson was far too important to the program’s success to risk letting get away. As if another reminder of his influence was needed, Zach Harrison was in the Woody Hayes Athletic Center on National Signing Day already working out in Mat Drills early in the morning, and the nation’s most coveted defensive lineman almost certainly wouldn’t have been there if Johnson wasn’t also in the building.

“Any time you want to be a championship team, if you don’t win the line of scrimmage, that’s not going to happen. More importantly you have to win the locker room. The defensive line is a big part of that. What he’s recruited to the defensive line, how those guys feel about it. More than that, he’s a father figure to everybody on the team. That was important in making him the associate head coach.”

The brighter spotlight hasn’t come as a surprise to Day, who catapulted to stardom early last season by filling in as Urban Meyer’s replacement for the first three games of the season on the way to taking over permanently after the Rose Bowl. It has certainly changed some things when Day and his family are out in public, and there’s no going back from that in such a high-profile position. But he’s also doing everything he can to adjust without changing his lifestyle.

“It’s been different for my wife, different for the kids,” Day said. “But, again, this is something that I’ve always worked towards, had the vision this is the way my life was going to go. It does take some adjusting.

“We talk about it as a family, what that means to our family. We’re not changing anything about us. That’s not going to happen. Really being humble about the fact that — when I walk down to hallway, saw the guys, I don’t know if you saw the new picture up there, again, I go through the names of Urban Meyer, Jim Tressel, Earle Bruce, Woody Hayes, Paul Brown. Then you see your picture up there, it takes you to your knees a little bit. I understand that’s my responsibility.”

Ryan Day was joined at the podium on Wednesday by his new assistant coaches. Video interviews with Greg Mattison, Al Washington, Matt Barnes, Jeff Hafley and Mike Yurcich will be available here or on the Lettermen Row YouTube channel.