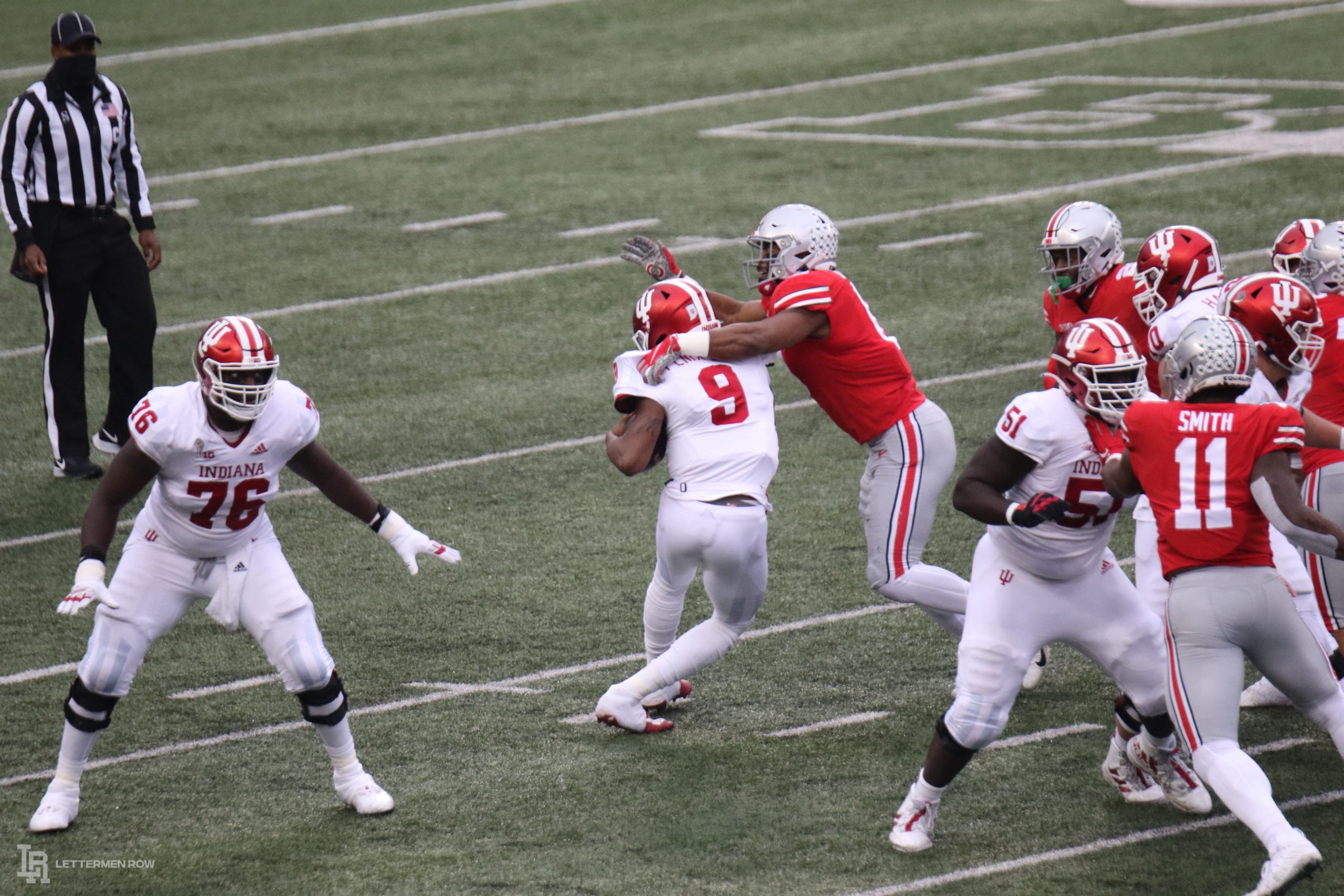 Jonathon Cooper and the Buckeyes are getting pressure on the quarterback. (Birm/Lettermen Row)

He watches the film. He notices the pressures, the hurries, the knockdowns.

So when he heard reporters asking him questions about why the Buckeyes aren’t getting enough pressure on opposing quarterbacks through four weeks, Cooper seemed a bit puzzled. Ohio State’s defensive line has dominated opponents in the first half of the regular season. And against Indiana, that was no different. Cooper had the highest ProFootballFocus grade of any Big Ten defender last week. Tommy Togiai had 10 quarterback pressures. Tyreke Smith had seven. They’re getting pressure.

But only sacks materialized against Indiana. So is pressure a problem if there are no sacks? The Buckeyes don’t look at it that way. But they certainly would like to get to the quarterback faster, get him on the ground and help out the suspect play on the back end.

“We have to figure out how to get home faster,” Cooper said this week following a barrage of questions about the defensive line. “I feel like we were winning and getting our pressures, but what we try to be really critical of is how can we be a second faster or a step faster. Just a little bit, one-point second faster so we can get that ball out and get a sack, get a sack fumble and create plays for our team. We just have to look at the film critically and figure out what we can do better.”

Led by the dominance of Heisman Trophy finalist Chase Young last season, the Buckeyes found getting to the quarterback to be easy. They had 54 sacks in 14 games as a team, good for 3.8 sacks per game. Young led the team with 16.5 sacks, and others cleaned up after him on some occasions after he got to the quarterback quickly and couldn’t make the play. 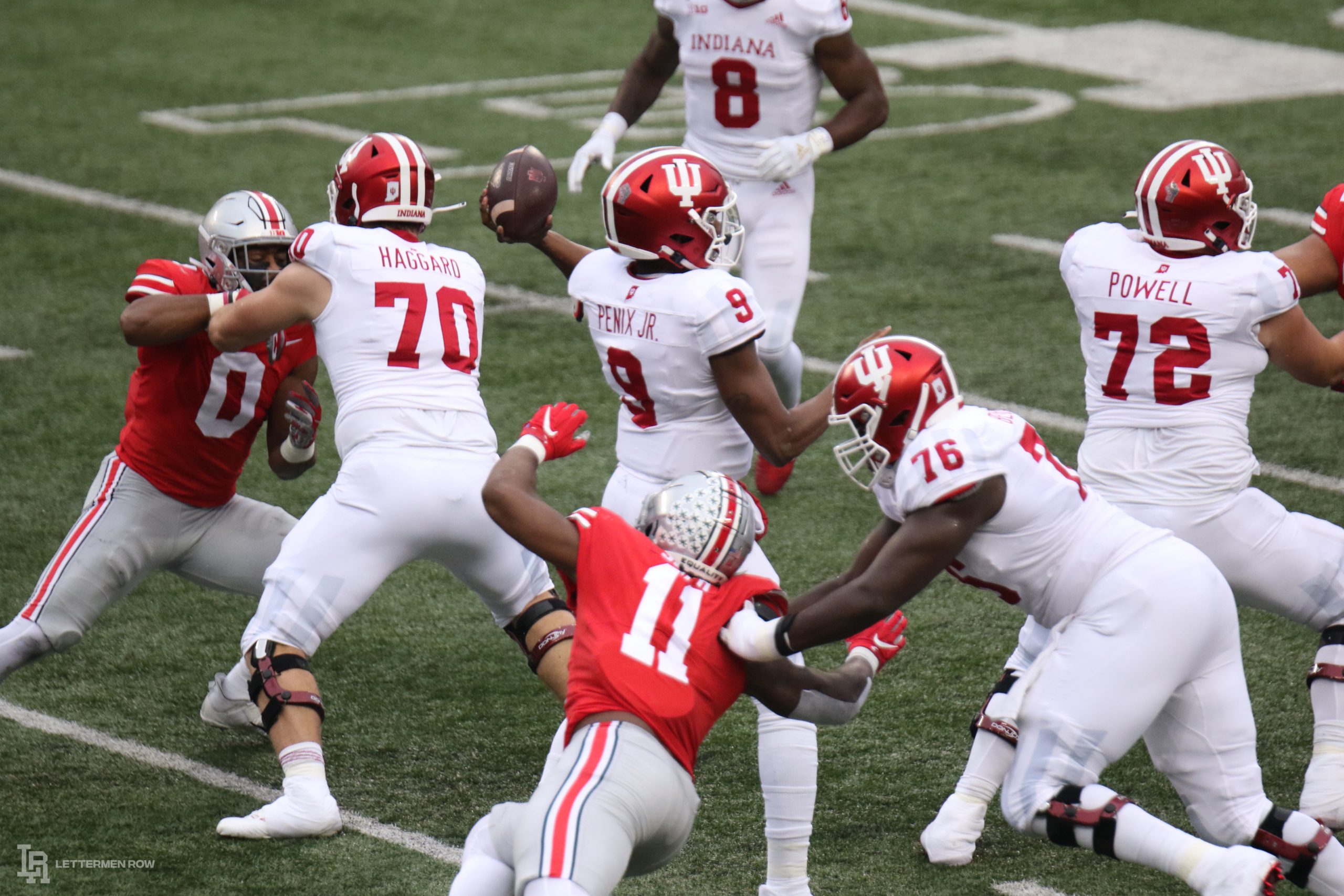 Indiana quarterback Michael Penix was under constant pressure from the Buckeyes. (Birm/Lettermen Row)

The Buckeyes, again, are getting to the quarterback this season. But it doesn’t seem to be happening as quickly as when one of the greatest pass-rushers in program history is on the field. Can that be fixed? Are there ways to get to the quarterback faster? Ohio State is searching for ways to make it happen.

“I think we’re getting very good pressure,” Ohio State defensive coordinator Kerry Coombs said. “We had 28 pressures and 10 knockdowns in the game Saturday. We’d like for those things to finish in more sacks, obviously. I thought their quarterback did a really nice job in standing in there and getting rid of the ball just before sacks, under a lot of pressure. And he was an accurate thrower in those situations. But I think we’ve got a lot of guys that can rush the passer, and I do think they’re putting a lot of pressure on the quarterback.”

Those 28 pressures and 10 knockdowns are impressive numbers, but they didn’t seem to bother Indiana quarterback Michael Penix, who carved the Buckeyes up for 491 yards passing and five touchdowns despite constant disruptions in his face. He willed the Hoosiers back from 28 points down to nearly tying the game in the fourth quarter. If sacks were easier to come by, the Buckeyes secondary may have not struggled so badly.

It’s easy to understand that sacks are better than pressures and hurries. But it’s hard to watch a quarterback throw for almost 500 yards and still consider the defensive line to be doing its job. But that’s what this Ohio State defensive front did. It did what it needed to, pressuring Penix on nearly every drop back.

As the season progresses, the Buckeyes have to find a way to turn pressures into sacks. And when they do, it’ll be more obvious how productive the defensive line has been all year.

“We want to get there, we want to get the sacks,” Cooper said. After a game, the stats didn’t really show what we were doing all game. But during the game, you have to keep going. You have to keep getting there. That’s what I tell my guys: keep going. I told them on the sideline, “he’s going to break. He’s going to hold onto the ball one of these times,” so just keep rushing, keep rushing. And I feel like we just have to keep doing that no matter what goes on throughout the game…

“I feel like people aren’t really seeing the type of defensive line that we have and the players that we have are rushing extremely well because of the stats and sacks and stuff like that, but I couldn’t be more proud of my guys. We just have to keep going.”