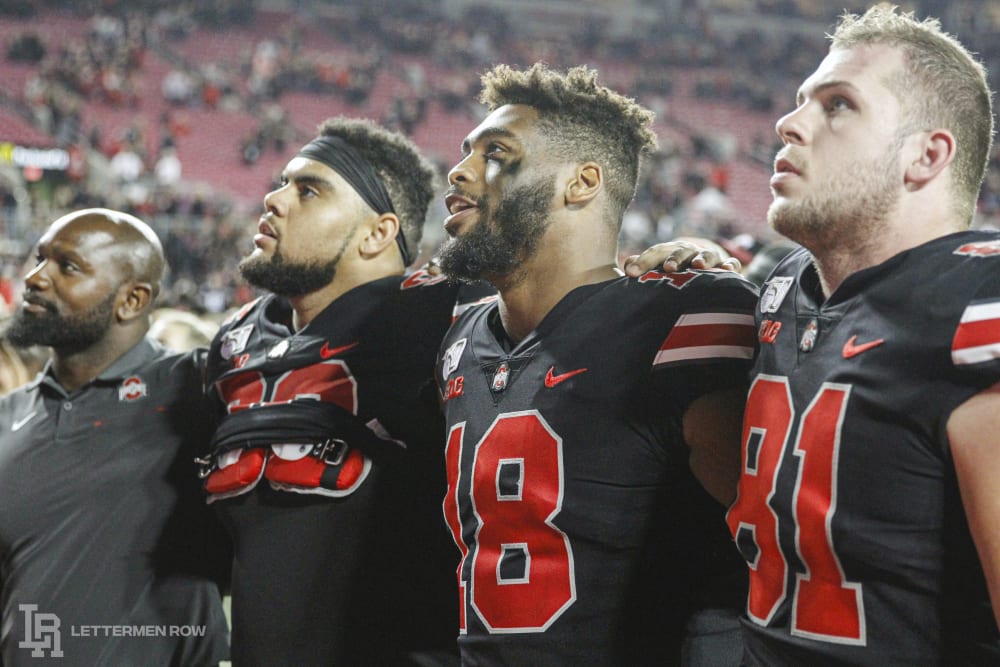 Jonathon Cooper and Ohio State head into the off week with a perfect record. (Birm/Lettermen Row)

COLUMBUS — Ohio State has reached the halfway point in its season. After a convincing win over Michigan State, the Buckeyes finally feel tested.

But they didn’t have much trouble beyond some first-quarter woes in their 34-10 win over the Spartans.

Now, Ohio State finds itself moving into the top four at No. 4 in the latest Amway Coaches Poll, which was released Sunday afternoon. The Buckeyes moved into a tie for third in the latest AP Poll.

Alabama retained the top spot. The Crimson Tide are followed by Clemson, Georgia, Ohio State and Oklahoma, who rounded out the top five of the Coaches Poll.

The formula for Ohio State is simple moving forward: Just keep winning. But first, the Buckeyes will take an off week to find the training room and work out any bumps and bruises from the first six weeks of the season.

“At least for me it is [the right time for an off week],” Ohio State quarterback Justin Fields said after getting sacked three times and moving gingerly near the end of the game. “This is definitely the most banged up I’ve been after a game, so I’m definitely glad we have a bye week next week.

“I think we’ll all just get in the training room, just get our bodies back right, just get ready for the game.”

The next game is a Friday-night trip to Northwestern on Oct. 18. But until then, Ohio State will take its No. 4 Coaches Poll ranking and some time off, and the Buckeyes will use it as an opportunity to get better, a concept that may be scary for upcoming opponents.

“I think that this is a perfect opportunity to sit back and look at these six games, evaluate where we’ve gone, where we are and where we’re headed,” Ohio State coach Ryan Day said. “But this was the perfect game to kind of do that.”

The full rankings can be found here:

J.K. Dobbins building case as best tailback in Big Ten — and nation
Five Questions for Buckeyes heading into off date, second half
Advertisement