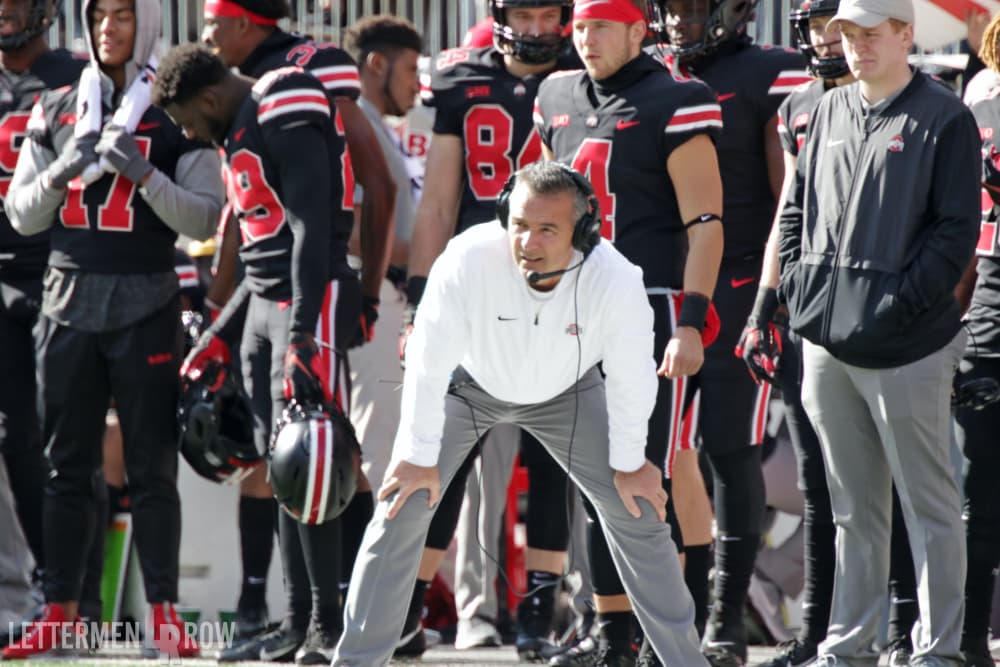 Ohio State coach Urban Meyer has always made pained expressions on the sideline, regardless of his health issues. (Birm/Lettermen Row)

The speculation, debate and conversations about Ohio State never end, and Lettermen Row is always ready to dive into the discussions. All week long, senior writer Austin Ward will field topics on Urban Meyer and the Buckeyes submitted by readers and break down anything that’s on the minds of the Best Damn Fans in the Land. Have a question that needs to be tackled, like the one today about Urban Meyer and his health? Send it in right here — and check back daily for the answers.

From what you saw, was Urban distraught over the game or did his headaches kick in? I dont know how close you actually get or if you get to interview him. Also didn't get to see post game interview so tell me to shut up and stop asking ??? at anytime. LOL

The only difference when Urban Meyer grimaced, grabbed his head, emotionally reacted to a critical play or put his hands on his knees away from an Ohio State huddle last weekend was the number of times it was shown on the television broadcast. Everything else was essentially the exact same as it’s always been with the seventh-year coach on the sideline with the Buckeyes, and to some extent he’s been doing it throughout his career.

Yes, Meyer has been in pain this season as he deals with complications from an arachnoid cyst inside his brain. The intensity he’s famous for can absolutely trigger symptoms, and it can make getting through practices, blowing a whistle or watching film difficult at times for him. There have absolutely been games over the last two years where that has manifested with something unusual on the sideline, most notably when he dropped to a knee while suffering from dizziness earlier this season against Indiana.

Nobody but Meyer knows for sure if Maryland was better or worse for him than normal. But having spent a great deal of time covering Meyer and having sat down with him for extended conversations about his health this season, I don’t believe last weekend was a sign of any extreme discomfort or worsening conditions. Those close to him believe Meyer has started managing the situation better on a daily basis with everything from his routine to medication. But it could be easy to think otherwise based on the volume of reactions shown on television, although both before and after the game Meyer seemed to be in some of the best spirits of the season — even after one of the most insane afternoons of the year. 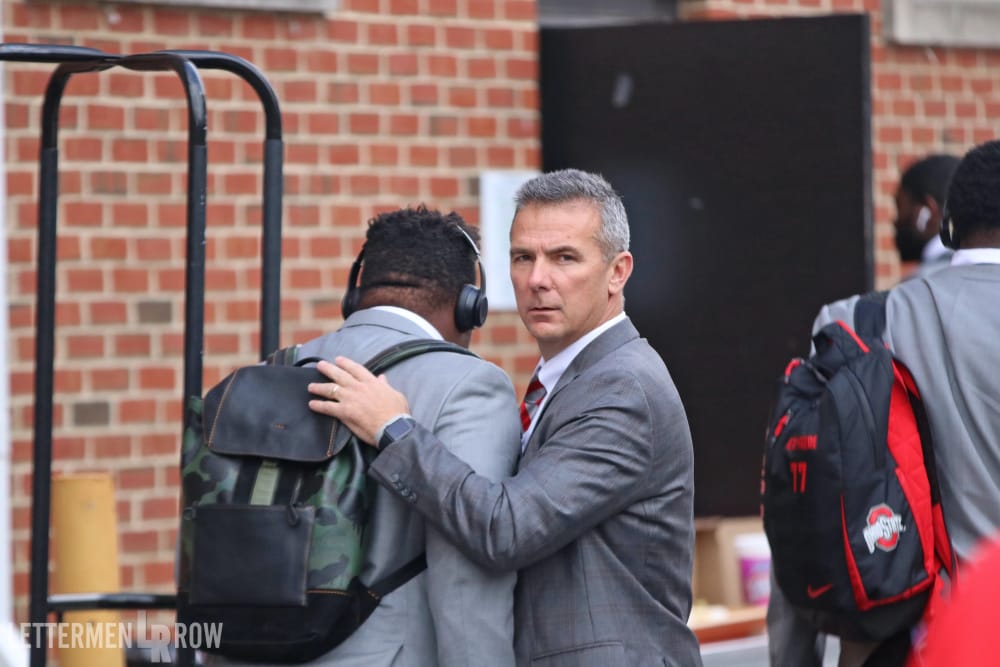 Urban Meyer appeared to be in good spirits both before and after the Ohio State game at Maryland. (Birm/Lettermen Row)

Meyer had his laser-light focus on display outside the cramped visiting locker room a couple hours before kickoff. But standing just behind the end zone, he was still smiling and willing to crack a couple jokes. After the Buckeyes had officially survived when a two-point conversion attempt failed in overtime, Meyer patiently, thoughtfully addressed a handful of tough questions while also continuing to show some humor that doesn’t usually emerge after one-point wins on the road.

It’s not unusual for Meyer to stand away from the huddle, crouch over and focus on what’s being discussed on the headsets. This season, it’s also not been uncommon for him to take the headset off entirely in certain situations, which is part of the way he’s shown trust and delegated responsibility to the rest of the staff. And when it comes to wild reactions, from fist pumps to tortured-looking head grabs, that might as well be a Meyer trademark.

Nobody knows with any certainty what the future holds with Meyer thanks to that damn cyst. He’s going to coach as long as his health allows, though, and there is no reason to think it’s getting worse just because the cameras are focusing on him more.

Continue Reading
You may also like...
Related Topics:Featured, Urban Meyer, The Game