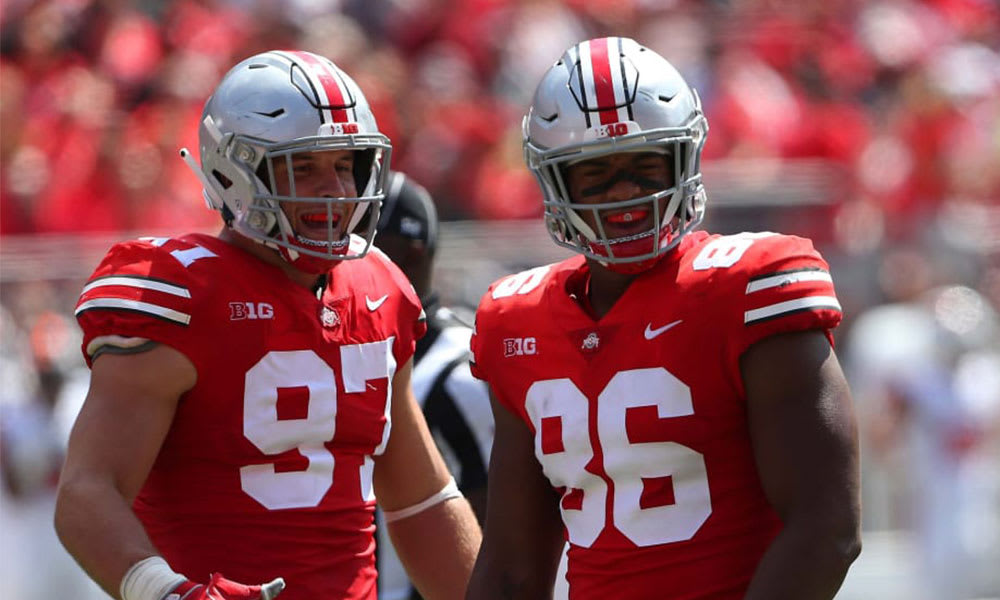 Dre'Mont Jones is one of the guys looking to step up for Ohio State without Nick Bosa. (Joseph Mairorana/USA TODAY Sports)

But the Buckeyes know that it won’t be this week against Tulane, potentially putting some new faces in prominent roles and likely some additional workload on the rest of the starters on the defensive line.

Considering how dominant the junior has been up front for Ohio State and the growing conversation about how he could potentially sneak into the Heisman Trophy race thanks to his ridiculous production, filling his void certainly isn’t an easy task. But for now, it’s not one that appears to be stressing out the Buckeyes.

“I feel the same amount of pressure that I had before,” defensive tackle Dre’Mont Jones said. “I mean, it was upsetting to see him down and out.

“But some more guys have to step up, we all still have to play.”

Jones will continue to be a big part of that, and it’s possible he could even get some snaps on the edge if needed as Ohio State deals with the possibility that Bosa could potentially be out for more than just one game with an abdominal/groin issue.

Freshman defensive end Tyreke Smith is another prime candidate to take on more responsibility, though completely matching what Nick Bosa provides to the Buckeyes is a tall task.

“[Bosa] is one of the best players I’ve ever been around, and he’s an even better person,” Ohio State coach Urban Meyer said. “Just an elite player.

“We’ll know midweek here [about his status]. Further tests are being done now.”

The results won’t change anything this week for Ohio State. But one way or another, the prognosis may wind up being critical down the road for a team with national-title hopes.

Ahead of Meyer’s return Saturday, Ohio State players Malcolm Pridgeon, Davon Hamilton, Dre’Mont Jones, Jordan Fuller and Isaiah Prince met with the media Tuesday evening to preview the matchup against Tulane. The Buckeyes return to Ohio Stadium after adding a top-15 road win to its resumé last week in their win over TCU at AT&T Stadium.

Watch below to hear from some of the players: