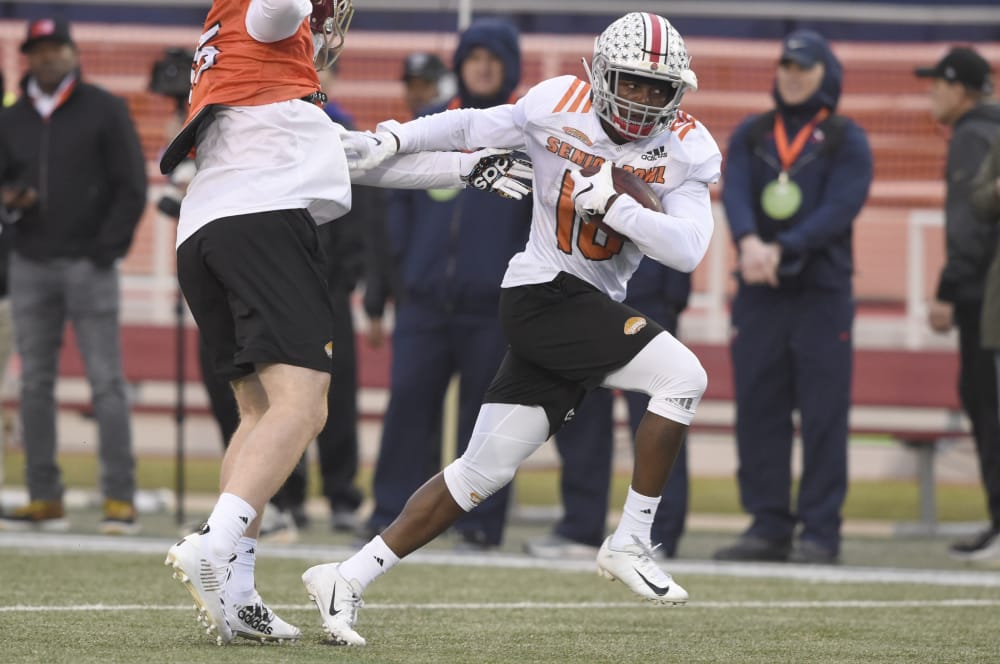 COLUMBUS — Well, it seems as though Ohio State football’s best-kept secret gained some traction ahead of the final collegiate game for Terry Mclaurin on Saturday at the Reese’s Senior Bowl.

NFL scouts and draft analysts across the country began to truly take notice of the former Buckeyes wide receiver this past week during the bowl’s practice, where McLaurin put on a well-rounded show for those watching. Many were enamored by his speed, athleticism, route-running ability as well as his overall ability to be coached and desire to simply be on the field at all times.

However, if you’ve been following Lettermen Row coverage this past season and Ohio State football for the last four years, the fact that McLaurin is a dream for coaches should not be news to anybody. Urban Meyer has said that the Indianapolis-native is the type of player that a program builds a statue for, despite McLaurin basically saying his only goal was to be a leader for the team.

The next step for the former Zone 6 member will be the NFL, and he has already turned some heads to likely move up the draft board. Why? Lettermen Row is taking a look at a few reasons teams are starting to learn the name Terry McLaurin.

After creating some headlines with his route running and acrobatic catches during practices earlier this week, McLaurin finally got his opportunity to show what he can do Saturday in the Reese’s Senior Bowl.

It was an exciting afternoon at Ladd-Peebles Stadium and McLaurin wasted no time getting in on the action, starting the matchup against the South team at receiver and catching his first pass on just his second play of the game. In all, he caught four passes for 53 yards in the game and registered a 20-yard gain on the ground to assist the North team to a 34-18 win.

McLaurin may have been on the other end of the most exciting play of the day, as the North team ran a flea flicker losing by two in the third quarter and the former Buckeye rose up through traffic to haul in the reception for a 25-yard gain. 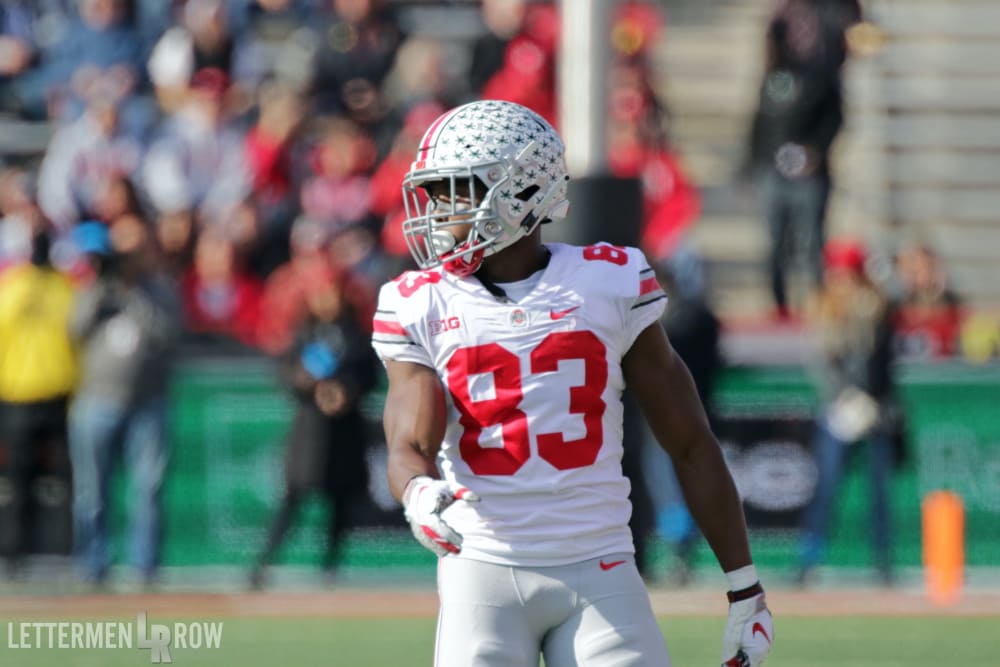 It may have taken some people just a week of him being in the spotlight to notice just how good McLaurin is. But if you take a closer look at his career in Columbus, you’ll find that he’s been as consistent as can be since his sophomore season.

McLaurin racked up just 39 catches for 543 yards and eight touchdowns combined over his first two seasons. But during his final campaign, he took advantage of a more prominent role on the offense and had a breakout senior year. The former Ohio State wideout scored on nearly one-third of his 35 receptions with 11 touchdowns this season and led the receiving corps with a 20-yard average per catch.

“He was toasting people vertically and sharp out of his breaks. I thought he gave all the cornerbacks a tough time,” NFL.com draft analyst Lance Zierlein wrote following Day One of Senior Bowl practice. “He was a late add to the roster here, and he really looked good. We weren’t hearing any buzz about him coming into today, but with his speed and ability to separate, he’s definitely on my radar now. At 6-foot and 205 pounds, he has good size and it looks like he has really good speed.”

He made a handful of athletic and acrobatic catches during his final season at Ohio State, but none sums his all-around talent up quite like this 75-yard scamper against Oregon State.

If a franchise is looking for an overall solid receiver that has career longevity on his side, Mclaurin is the man. But if a team is looking to possibly use him on special teams, the gunner position is where the former Buckeye really shined while wearing the Scarlet and Gray.

His ability to get off blocks on the snap of the ball along with both his open-field and closing speeds were a lethal combo during his senior season at Ohio State. Whether it was securing Drue Chrisman darts inside the five-yard line against Purdue and Michigan State, or getting down the field to make a huge hit in the Rose Bowl, McLaurin easily was the most valuable player on the Buckeyes special teams unit. Along with Chrisman, who was also ridiculous all season long.

He showed off these skills a bit during the Senior Bowl practices this week, and it’s likely that scouts took notice of that. Urban Meyer sure did. 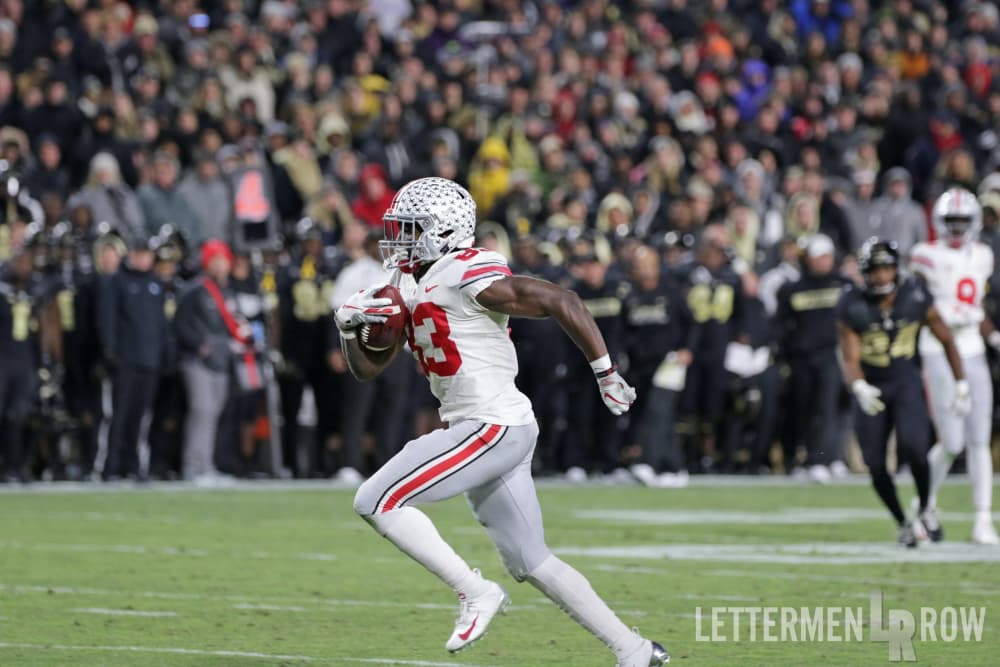 Excels at wide receiver. A special teams nightmare. Is there more this guy can do? The answer is yes.

Other members of Zone 6 have reaped the benefits of McLaurin’s blocking downfield this past season, and most of the time, that hustle usually allowed the Buckeyes to score a touchdown. The former captain sprung Parris Campbell for six early on the year against Tulane, but his most memorable block may have saved the Buckeyes season on the road at Penn State. After Dwayne Haskins led Ohio State down the field trailing late in the game, he threw a bubble screen to K.J. Hill — and thanks to McLaurin taking out three Nittany Lions in his path, Hill high stepped into the end zone for the win.

The former Ohio State receiver is dangerous when he’s on the field making catches, but he’s just as threatening without the ball when he’s clearing lanes for his teammates.

As a captain in his last season, McLaurin was leaned upon to be a leader both within the receiving corps and throughout the program. Looking back now, not only did he, Parris Campbell and Johnnie Dixon spearhead one of the most prolific offenses in school history, but McLaurin became a tone-setter and role model for younger Buckeyes coming up the ranks.

Working under coach Brian Hartline this season, the 6-foot-1, 205-pound receiver was able to master his route-running craft and show underclassmen like Chris Olave how to become a headache in coverage. However, as McLaurin said following the Michigan State game last season, he prides himself on his special teams performances and uses that as a way to illustrate to younger guys how to get on the field.

“I was telling the young guys when they brought me up [after the game], if you want to make your spot on this team, and earn a lot of respect — especially from Coach Meyer — special teams is the way to do it.”