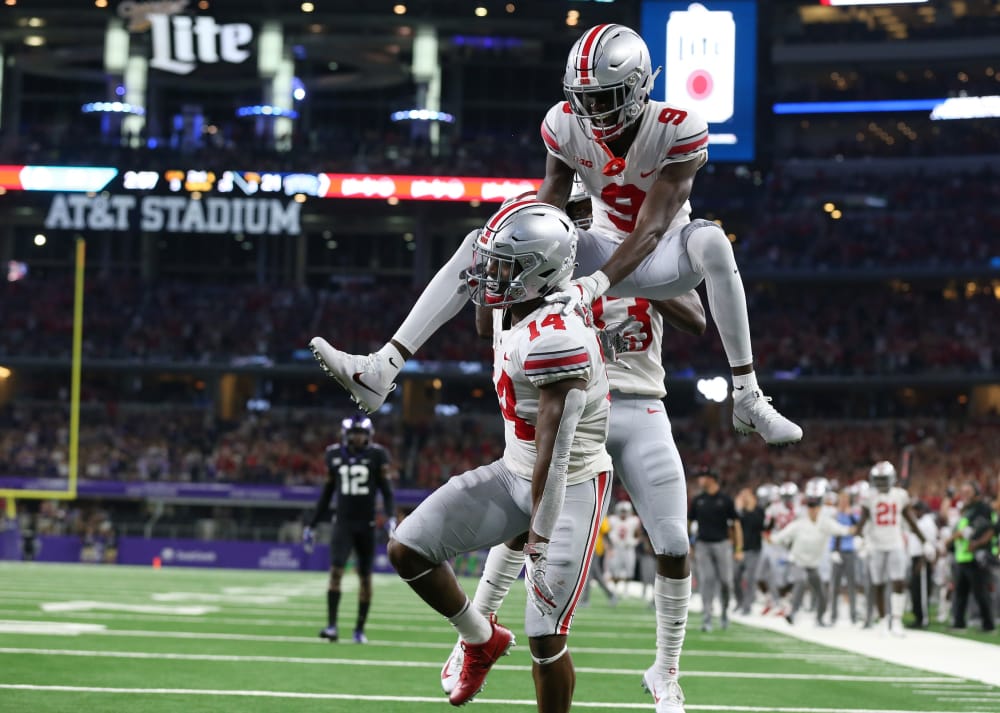 Ohio State was able to celebrate down the stretch against TCU. (Matthew Emmons/USA TODAY Sports)

For all it has endured even before this season kicked off, Ohio State’s football team should never have had its resolve questioned.

If it was, the Buckeyes used a second-half performance that showcased the best of their offense, defense and special teams, not to mention their resiliency, in the Advocare Showdown inside AT&T Stadium in Arlington, Texas.

On a day the Big Ten stumbled as a league, Ohio State once again carried the conference-wide banner in a national showcase win against TCU.

The Buckeyes will give their returning head coach, Urban Meyer, a 3-0 start on the season next week for his return against Tulane, but here are Snap Judgments from a hard-earned win in the Lone Star State.

Ohio State scored a pair of defensive touchdowns and also capitalized on a scant 25-yard field after it blocked a punt.

The Buckeyes first got a defensive score when Nick Bosa’s sack and forced fumble at the 1 was scooped up by Davon Hamilton for a touchdown. It was Bosa’s sixth-straight game with a sack, though the standout end left the game just two minutes into the third quarter with a “lower abdomen strain.”

Seizing control and all momentum in the third quarter, the Buckeyes got a Dre’Mont Jones 28-yard pick-six. Jones adroitly read the attempted shovel-pass and made a nifty cutback along the sideline as he darted into the end zone.

The Buckeyes also swarmed all over the attempted TCU punt, as redshirt-freshman Shaun Wade was credited with the blocked punt. Two plays later, the Buckeyes were in the end zone.

Ohio State’s typically staunch linebacking corps showed up by not showing out as the Horned Frogs riddled the Buckeyes for 14 first-half points and an eye-gouging 289 yards’ offense. By halftime, Ohio State’s top three tacklers were cornerback Damon Arnette, with five stops, and defensive ends Nick Bosa and Jonathon Cooper with four apiece.

Tuf Borland notched three tackles in the half, but the group oftentimes looked mismatched for TCU’s speed on the perimeter.

Former Buckeyes linebacker James Laurinaitis asked on Twitter, “Where are the LBs stepping? Ball goes left and you step right?.”

The group played much better after the break and saw Malik Harrison amass six tackles, including a half-tackle for loss, and a quarterback hurry.

Just 21 minutes into the game, TCU had outgained the Buckeyes, 262-160. Ohio State allowed just 236 yards the next 36 minutes to seize command of the contest and erase a 21-13 deficit.

Austin Mack entered the game as perhaps the Buckeyes’ most reliable wideout, with 34 career receptions. The 6-foot-2 junior from Fort Wayne, Indiana, dropped three first-half passes and also committed a costly holding penalty on Ohio State’s final drive of the opening half.

Mack did corral two of the six targets he garnered in the opening 30 minutes — a pair of back-to-back receptions that covered 64 yards and set up Ohio State’s game-opening field goal.

Redshirt-freshman defensive back Shaun Wade got his most extensive action as coaches deployed the 6-1 former consensus five-star in his most meaningful situations.

The Jacksonville, Fla., native was solid in coverage, yielding a lengthy completion in the fourth quarter despite very solid positioning, and broke up a pass while recording multiple solo tackles.