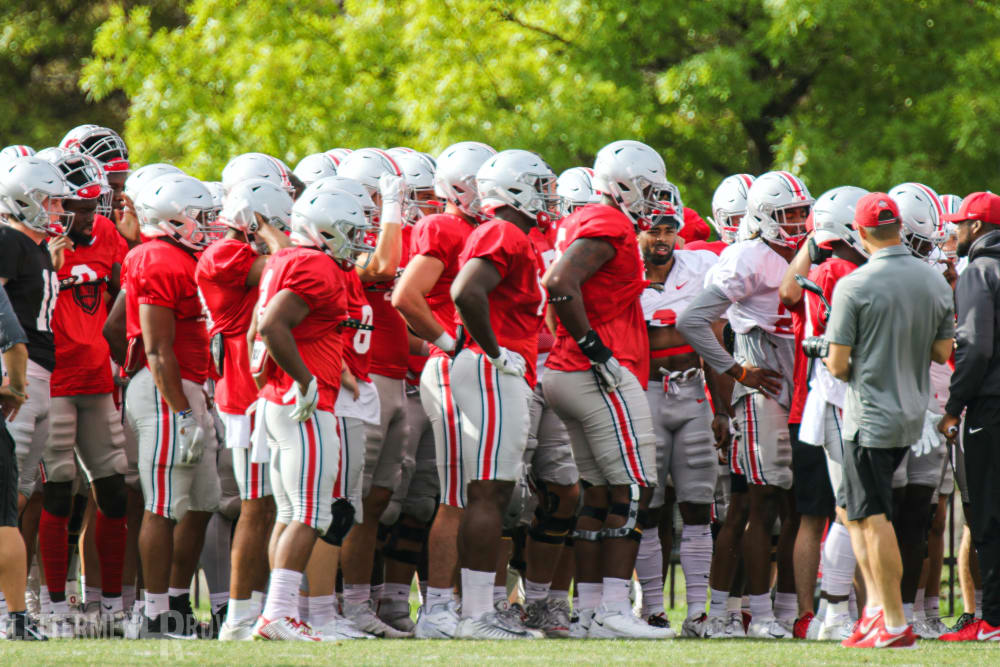 Ohio State wrapped up a busy week of training camp with a scrimmage on Saturday. (Birm/Lettermen Row)

COLUMBUS — Ohio State didn’t need to keep an official score to know who won the first scrimmage of training camp.

The defense has the edge after a full week of practices. And it left little doubt about that on Saturday by forcing a handful of turnovers and again showing signs that the Buckeyes could be in line for a dramatic turnaround on that side of the ball.

Of course, in a scrimmage setting the positives that come from defensive takeaways are also negatives for an offense that is giving the football away. That can be a tricky balancing act for first-year coach Ryan Day, but for the most part he seemed to come away pleased with what he saw on a gorgeous August morning on campus.

“Offense turned the ball over too many times, didn’t run the ball the way that they should,” Day said. “So, defense won the day for sure. I think when you look at the experience level, sure, I think the defense has more experience. I think schematically the offense has a couple years in, some of the older guys. So I don’t know really who’s ahead of the other, but I will say up to this point, it’s kind of gone back and forth, which is a good sign. The offense will kind of get after the defense one day and then vice versa. So that’s healthy.

“I think if one side is dominating the other throughout camp then you may have an issue. But right now, it’s been a good battle.”

The competition will continue for a couple more weeks as Ohio State keeps building with an eye on the season opener against Florida Atlantic on Aug. 31. Here’s what Lettermen Row took away from the latest workout and conversation with Day after the key early scrimmage.

The likely outcome hasn’t changed one bit for Ohio State, but it’s still not ready to make it official by naming Justin Fields the starting quarterback. Day didn’t go into many details about the turnovers, but he did make it clear again that he hasn’t seen enough to make a decision on top of the depth chart and will likely need at least another week of data before closing the competition.

“I thought after today I’d have a better feel,” Day said. “Nobody went out there and won the job for sure. So again, still a work in progress. Hopefully at this time next week somebody steps up and wins the job.”

Fields is still locked in a head-to-head race against Gunnar Hoak for the top spot. But the Georgia transfer still appears to be working almost exclusively with the first-team offense when the media is allowed to watch practice, and Fields remains a near-lock to take the first snap of the year.

The fight for the critical role at middle linebacker for the Buckeyes initially appeared to be a two-man race, but Baron Browning is starting to make an impact and shouldn’t be overlooked coming off a solid scrimmage performance. The position seemed to be up for grabs between Tuf Borland and Teradja Mitchell heading into camp, and Browning’s ability to play in a couple different spots and his desire to play elsewhere made it seem like he wouldn’t be a factor in the middle.

But the Buckeyes had him there on Saturday, and he was one of the first players to draw praise from Day when the session was over.

“Yeah, he’s playing mostly in the middle,” Day said. “He’ll move around a little bit, though. He plays fast. He’s very, very athletic that way. He’s physical. He’s big. He’s strong. I think [linebackers coach Al Washington] is doing a good job with him in terms of understanding and diagnosing plays and being in the right spot at the right time.

“I think all the linebackers are doing a good job. It’s a long, athletic group right there, and so they’re off to a good start.” 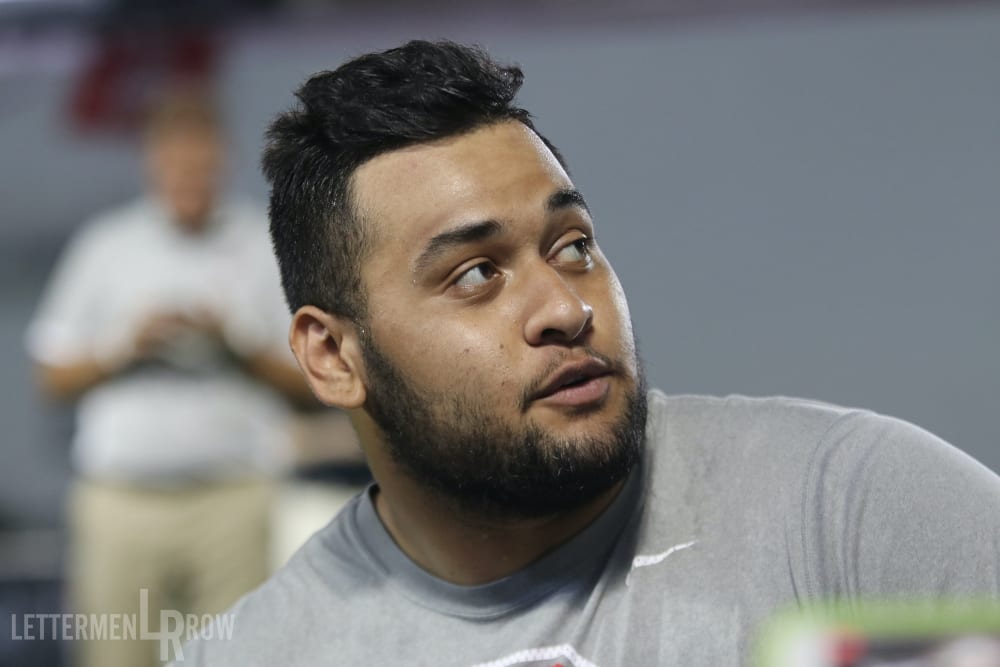 There hasn’t been any separation so far during one of the most interesting camp battles for Ohio State at right tackle. And if the Buckeyes don’t see any by the time the season rolls around, it’s possible that they might play both Branden Bowen and Nicholas Petit-Frere on a rotational basis.

That kind of approach isn’t all that common since establishing chemistry and consistency is usually so important on the offensive line. But both players bring plenty to the table for the Buckeyes, and there’s been no drop-off in performance so far with either one on the field.

“I think when you look at it right now, it’s probably really close,” Day said. “It’s probably neck and neck. They’re rotating in. Some are getting reps with the ones and twos. We don’t really look at who they’re with, we just kind of roll them.

“[Offensive line coach Greg Studrawa] is doing a good job of rolling those guys and making sure they’re getting reps. Because if both of them deserve to play, they will play.”

Another linebacker is pushing for playing time

Even with three returning starters at linebacker, the Buckeyes are clearly still open to changes with that unit. And just like Browning made the most of his chances on Saturday, K’Vaughan Pope did the same with an interception return for a touchdown that hints at his ability to make a push as an outside linebacker.

The sophomore wasn’t much of a factor during his developmental season, making just one tackle while appearing in 11 games last year. But he’s another former four-star prospect who has big-time potential for Ohio State on defense, and a couple more practices like the one he delivered on Saturday could propel him into the mix for playing time.

“A lot of energy out there, guys were fired up,” Day said. “Any time you can create a turnover and score it’s huge. Think about the TCU game last year and what that did for that game.”