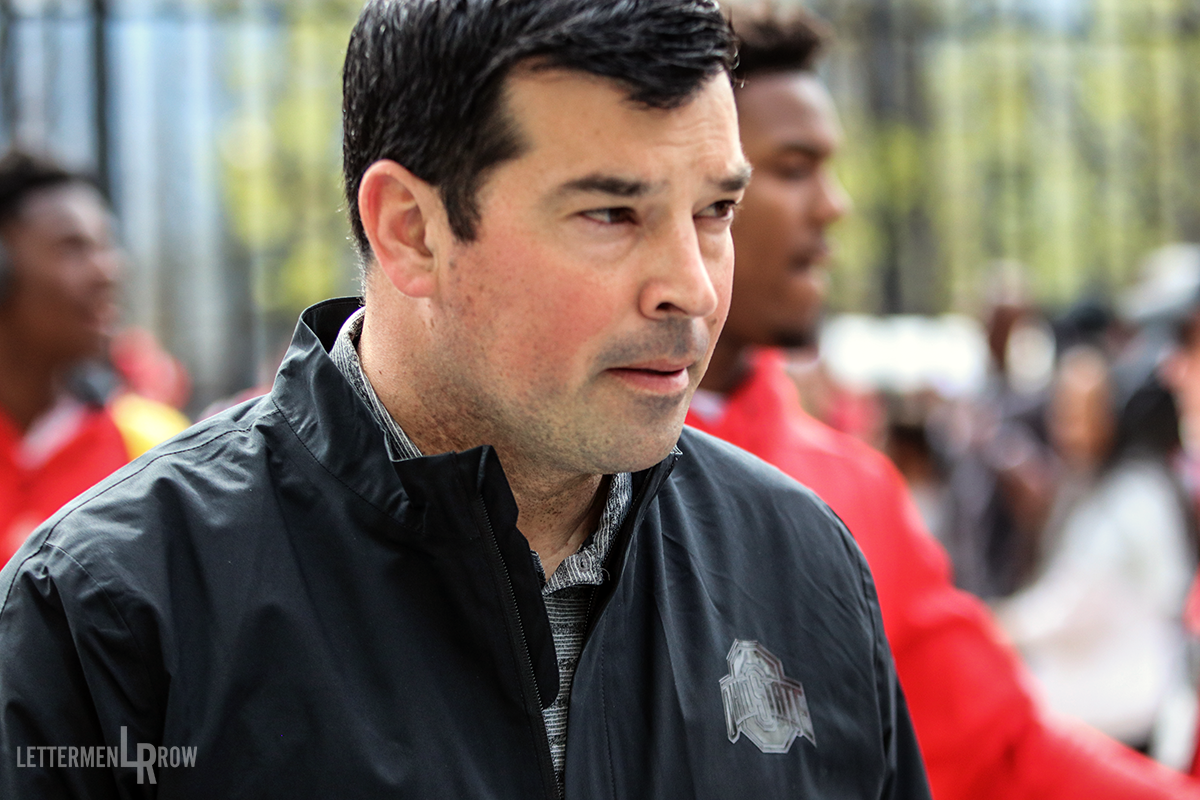 COLUMBUS — The choice really isn’t that difficult for Ohio State.

Yes, it can be a challenge to constantly have to replace first-round picks who leave eligibility on the table to jump to the NFL. But the alternative is building a team without some of the most talented players in the country, and obviously that’s not nearly as appealing for Ryan Day.

At times it can be a something of a high-wire act to keep rebuilding and reloading on the fly after watching guys like Dwayne Haskins, Chase Young or Jeff Okudah move on when the Buckeyes could have got another year of production out of those stars. But the success of those guys also helps attract the next wave on the recruiting trail, and when the assembly line is humming like it is for the program now, Day has little reason to stress about it.

“I think it’s something you can get frustrated with or you can embrace it,” Day said after the NFL Draft ended over the weekend. “I think it’s something our staff has talked about. At Ohio State, it’s finding the right balance of young, talented guys like Dwayne Haskins or Chase Young or Jeff Okudah who are only going to be here for three years mixed in with fourth- and fifth-year seniors who are veteran and have been around the program with great leadership and maturity.

“This year we have Justin Hilliard and Jonathon Cooper, we’re hoping to hear about C.J. Saunders [and his appeal for an additional season of eligibility] — there’s fifth-year seniors in the program who bring a maturity level to the table. When you mix that in with very talented players, sometimes generational talent, I think that’s the right recipe. The maturity and leadership mixed in with the talent is where you can find something special.”

The Buckeyes have been working to perfect that formula since Urban Meyer arrived and upgraded the program’s recruiting level, and Day hasn’t missed a beat since then. At this time next year, there will be similar discussions about the next crop of draft picks and another group that could set records for Ohio State.

The Ohio State coach dove into those future prospects and looked back at how the draft shook out for the Buckeyes over the last few days in a conference call on Sunday, and here’s what Lettermen Row learned from the conversation.

Every team in the league had multiple shots to take the most productive receiver in Ohio State history, and all of them passed on K.J. Hill. The Los Angeles Chargers eventually snatched the wide receiver up in the seventh round, and Day conceded that it was obviously a steal for that organization.

The Chargers clearly recognized the value, but they shouldn’t be excluded from taking a little blame for the baffling drop of a guy with no shortage of evidence on film of his reliability, game-changing potential and sharp route-running that consistently got him open game after game. Hill did get his name called, and he’s going to have his opportunity at the next level. But out of everything that happened for the Buckeyes during the draft, Hill’s slide was clearly still bothering Day when he evaluated it on Sunday.

“Yeah, I think K.J. Hill — that one I don’t understand,” Day said. “Going in the seventh round and seeing so many guys drafted before him, I mean, all he does is get open, catch the ball, make great plays, most productive receiver in Ohio State history. I don’t get that one at all. Certainly there are a lot of guys I could comment on, but that’s the one that sticks out to me.

“The Chargers got a complete steal, and I think a lot of guys missed on him.” 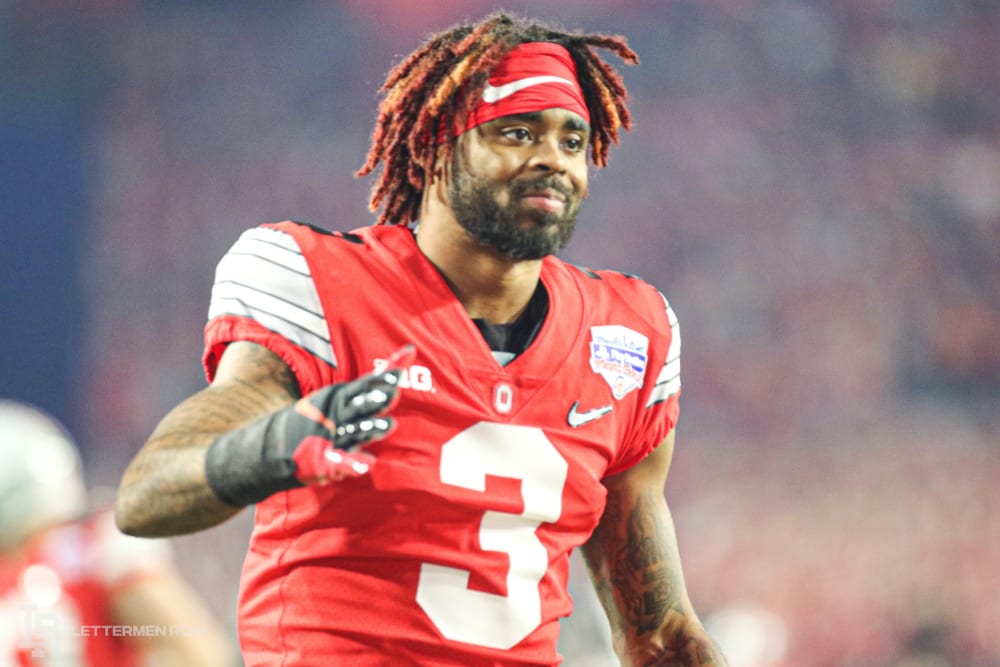 While Hill dominated the Ohio State conversation on Saturday, Damon Arnette was opening the most eyes on Thursday in the first round.

The Buckeyes coaching staff had been publicly suggesting for weeks that the veteran cornerback was going to come off the board earlier than most mock drafts indicated, and that was validated when Las Vegas plucked him with pick No. 19. Arnette’s decision to return for another season of development turned out to be a jackpot for him — proving he could be an elite defensive back even while playing with a huge cast on his hand for the entire year.

“No, not really [surprised],” Day said. “I was more surprised that leading up to it people had projected [Arnette] into the second round. I think when you look at his body of work, his versatility and the fact that you’re getting a fifth-year senior who has played a lot of football … you’re getting a mature guy who competed at a high level. Then he showed toughness this year playing with a broken hand.

“It’s hard to tell because we don’t know who all else is out there in terms of the prospects, that’s not our job. But he was definitely a first-round talent, and I think he’s going to play really well out there in Vegas.”

Before the current NFL Draft was even over, Ryan Day was already getting questions about how high his quarterback is going to go next year.

The Buckeyes aren’t strangers to full years of hype for their top prospects. But it doesn’t generally happen for the program at quarterback, which makes for a unique situation as Justin Fields returns for his second season as the starter following his Heisman Trophy-finalist campaign as a sophomore.

“That was the conversation all along,” Day said. “We’ll put him in position to go to New York City and to be a first-round draft pick. It’s his job to be a great leader and bring a championship back to Ohio State. I think there’s a certain level of trust there, and his development this past year has been tremendous. Still got a long way to go.” 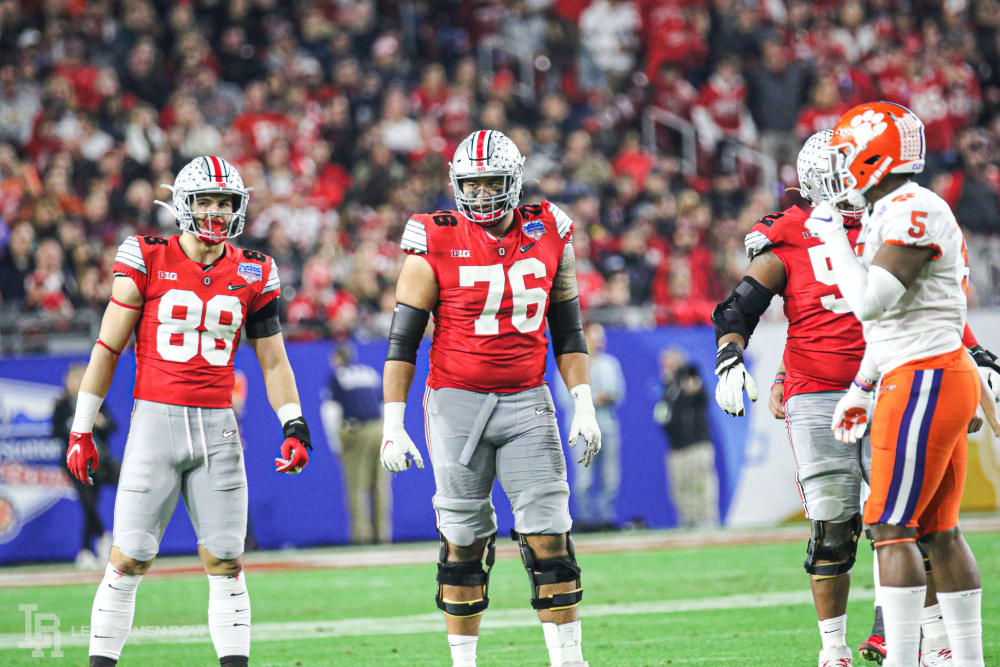 Branden Bowen was snubbed from the NFL Combine first. Then the pandemic took away his shot at a Pro Day workout on campus, and it potentially also made it harder in virtual meetings with teams to address any lingering concerns about his health.

That all combined to leave him outside of the draft entirely, a pretty unexpected turn of events for a massive tackle who also has experience at guard and was a consistent presence for one of the nation’s best offenses a year ago. Going undrafted did leave Bowen with a chance to choose his landing spot, though, and the Carolina Panthers were the pick on a roster where he’ll have a legitimate shot at making the team.

“It’s difficult, but I think all of these guys just want their opportunity,” Day said. “Certainly when you look at the offensive line, there are a lot of guys who make good careers in the NFL who were undrafted. But it is hard, it’s very difficult. Branden Bowen, I thought he played very, very well this season. Certainly had his injuries along the way, but he was healthy this season and played really well for us. I mean, he’s an NFL-caliber talent. Now that he gets his opportunity, it’s all about making the best of that opportunity. I think when Branden gets his opportunity, he’s going to make it count.”

The baseline expectation at this point is that every starting cornerback for the Buckeyes will get drafted. But the actual standard is creeping ever higher now as Arnette and Okudah gave the program six first-round picks at the position in the last five years, a borderline absurd stat that has the potential to heap extra pressure on the next guys in line.

Of course, the flip side is that guys Shaun Wade, Sevyn Banks and Cam Brown chose the Buckeyes because of their ability to develop elite players. So, it’s not like that measure of success is going to be a surprise to them as they try to fill the shoes of those two veterans.

“What’s the expectation for a quarterback at Ohio State? It’s to be a Heisman Trophy winner. It’s the same thing in the secondary. Win the Thorpe Award and go become the best you can be at the position and head to the NFL Draft with a possibility of being picked in the highest round. … The blueprint is there.”