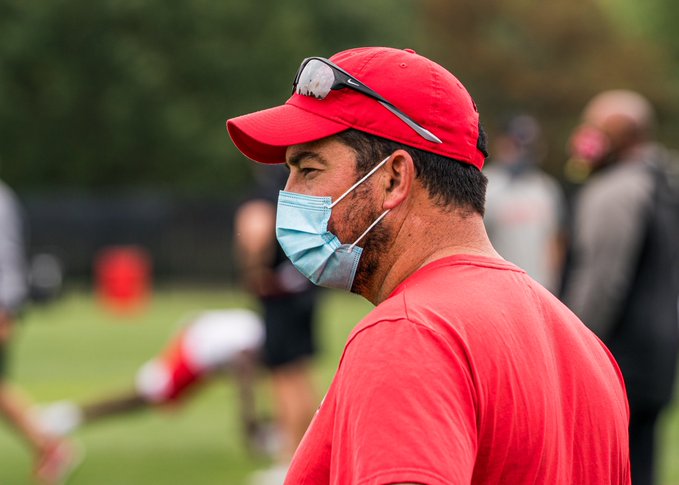 Ohio State coach Ryan Day was back on the practice field with the Buckeyes. (Courtesy/Ohio State athletics)

COLUMBUS — For at least a couple hours, everything felt relatively normal again for Ryan Day and Ohio State.

The Buckeyes were back on the practice field. They were able to go full speed with a football. The sense of urgency was ramped up now with a schedule confirmed and an opener slated for Sept. 3 at Illinois.

Of course, there was plenty about the workout that was still unusual in these uncertain times. Day also admitted he still isn’t fully comfortable with the idea of playing games just yet. But the Buckeyes had no reservations about starting training camp given all the precautions in place at the Woody Hayes Athletic Center, and clearly Day was thrilled to be back in his element leading the program.

“It was great to see our guys out there,” Day said. “The energy of the coaching staff, the players, the leaders, just being out there with a football running around was great. It’s great to see our guys with so much energy, to see them on the field doing what they love and just kind of forgetting about everything else for about an hour and a half was really great today. We’re off to a great start, but certainly we have a long road ahead of us.

“I’m comfortable with us starting training camp. I still think in order to play a game — not yet. I think the Big Ten did a wonderful job of laying out some of the stuff to get into the competitive season, some of the details and protocols moving forward. But certainly there are more details to be ironed out before we go play that first game. But I am very comfortable with what we have going on here with our training camp. … I would say right now that we’re not quite ready to play a game yet. But [Wednesday] was a great step forward for us.”

The Buckeyes followed that up with another significant one on Thursday. After that first practice of camp, Day spoke with the media to provide some updates on his team, and here are some lessons Lettermen Row learned from the conversation.

No Buckeyes have opted out of season

The door is open for anybody who doesn’t feel comfortable playing at Ohio State this year, and Ryan Day is encouraging open dialogue from the players.

But following in line with the captains who spoke publicly earlier this week, it doesn’t appear that any Buckeyes so far have expressed any concerns heading into training camp and nobody on the roster has elected to opt out of the season.

“The communication has been very strong so far.”

Everything from the way the Buckeyes get dressed for practice to where they go when it’s over and just about everything in between has had to be evaluated to deal with the unprecedented health concerns this year. So far, Ohio State feels confident in those adjustments — but it’s well aware that it must continue to be flexible.

So, for example, there are tents set up around the Woody where position units can meet outdoors. The indoor field has become the new locker room. On Thursday, the Buckeyes went through a split-squad practice to limit contact-tracing exposure, and it will continually evaluate the best model for getting through workouts to both stay healthy and prepare at a high level.

“There’s a lot that’s different,” Day said. “We have to do a great job of managing those situations and making sure we’re doing a great job with the protocol in place for training camp. When you look at this year, it’s going to be very different.

“The message for the team has been something that I feel like it’s been a broken record here for the last few years, but when we say focus on right now and win the moment, this is the ultimate situation for that. We don’t know what’s coming tomorrow. Certainly anything is possible, and we all know that. We’re not really focused on that. From that summer stretch on since we got here in June, it’s been about focusing on becoming a better football player and staying healthy. Now that’s the same thing, but we’ve added become a great football team.” 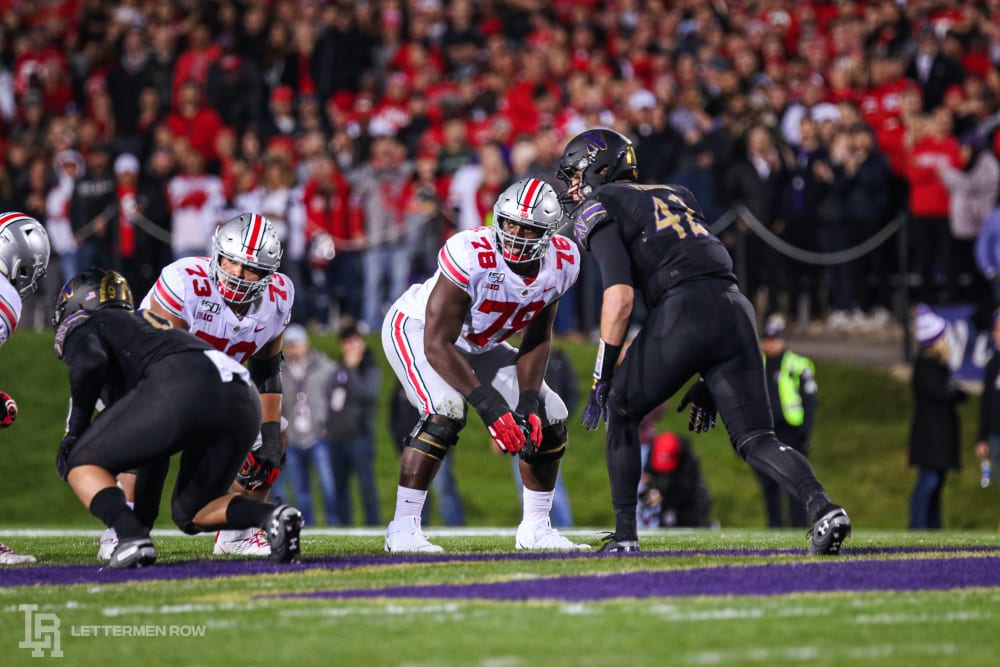 The most pressing actual football concern for the Buckeyes? That probably starts with the looming position battle at right tackle to complete what might be the best offensive line in the country.

Ohio State isn’t short on options since it was two different guys on hand who were once rated as the top-ranked players in the nation at the position. Throw in the rise of Dawand Jones to complement Nicholas Petit-Frere and Paris Johnson and the Buckeyes won’t bat an eye no matter who ultimately claims the position.

The safe bet would be on Petit-Frere, who has bulked up to 310 pounds after working for multiple years to tack on weight to his 6-foot-5 frame and has the experience edge. But the Buckeyes obviously won’t rule out Johnson at this point, though the abbreviated spring camp certainly didn’t do the true freshman any favors.

“Both are very, very talented,” Day said. “Until you put pads on, it’s hard to tell with an offensive lineman. But I’ve been very, very impressed with both of them for different reasons. Nick had a tremendous offseason. His body weight is as strong as it’s ever been. I think he had a great offseason — he’s strong, really looks like a different person. I’ve been impressed with Paris in the short time he’s been here, his attention to detail and the work he’s put in to get where he’s at right now. We’ll get a better idea once the pads get on, but both look really good.”

Ryan Day isn’t tipping his hand on the exact health status of Master Teague. But the junior running back is almost certainly ahead of schedule following the torn Achilles he suffered in March, which could potentially set up a fascinating competition for touches with graduate transfer Trey Sermon.

“I will say that Master has done an unbelievable job of rehabbing — he has been focused on it, he’s been disciplined and he amazes me every day with what he’s done to get to even where he’s at right now,” Day said. “Very, very impressed with what he’s done. It wasn’t easy, because he was on his own a lot.

“Trey has been a great addition so far. He’s got a great way about him, he’s got a great work ethic and our guys have kind of embraced him. When you bring in a fifth-year senior like that or somebody who is a transfer in one of those settings, you have to find the right guy. Jonah Jackson was the right guy, and we think Trey Sermon is the same way.”