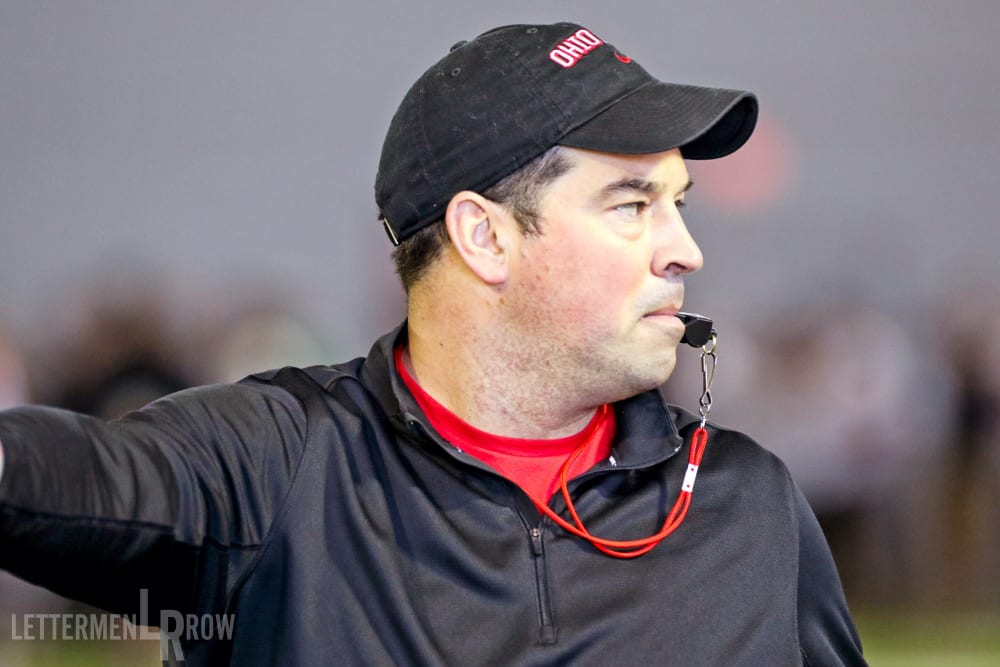 Ohio State coach Ryan Day is a third of the way through his first spring with the Buckeyes. (Birm/Lettermen Row)

Coach Ryan Day knew that, and he made sure to deliver an energized practice that was engaging for everyone — top-end recruits and students alike. The Buckeyes opened the Woody Hayes Athletic Center for Student Appreciation Day, but also housed plenty of high-level recruits Saturday.

“Today was great because we’re attracting some of the best players in America to visit,” Day said. “There’s a lot of them here.”

This was an important recruiting weekend for the Buckeyes because they’ll have the next two Saturdays off. Getting prospects to campus this weekend was a must. As the Buckeyes weave through spring practice, they’ll have the occasional visitor on weekdays, but it’s not as common as big weekends.

“We’re still having visitors during the week,” Day said. “But obviously, weekends always work better for the families.”

Day didn’t just entertain recruits and students, though. He also spoke with the media after practice. Here’s what Lettermen Row learned from Ryan Day. 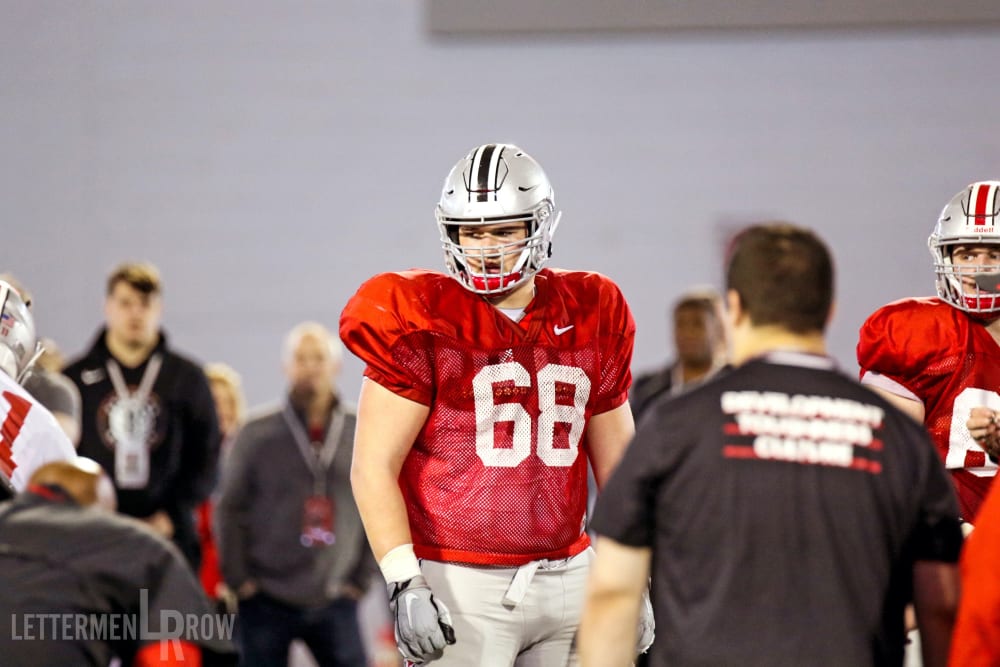 Ohio State freshman Ryan Jacoby and the offensive line are in the spotlight. (Birm/Lettermen Row)

Three offensive linemen need replaced up front for the Buckeyes, and that’s a key cog this spring.

When Joshus Alabi, who has been getting the first-team reps at left tackle, caught flu-like symptoms before practice, Branden Bowen had to slide away from the right tackle slot to fill in. That allowed Nicholas Petit-Frere to jump into the first-team offense at right tackle.

Bowen is coming off two injury-laced seasons, but he’s back in the mix for a starting spot now. Bowen has played guard and tackle in his time at Ohio State, and he’s one of the most interchangeable guys on the offensive line.

“It’s not easy to do — to jump around,” Day said. “He’s pretty versatile, though. That’s really important to have guys who can jump around like that.”

Spring practice can get tough, but the Buckeyes are keeping the energy flowing through five practices. With a number of recruits in town, Day made sure the practice had plenty of juice. It helps, of course, when the Buckeyes have prospects watching them practice.

It could have been a sluggish practice for the Buckeyes, who went on Thursday as well. But Day and his coaching staff continue to push players, making sure practices aren’t sloppy or slow. For the Buckeyes, it’s high energy all the time.

“We had a really hard, tough practice on Thursday,” Day said. “I challenged the guys to be tough. We had one of the better inside drills I’ve seen in a while. Guys were really getting after it. Paint chips were flying off helmets.” 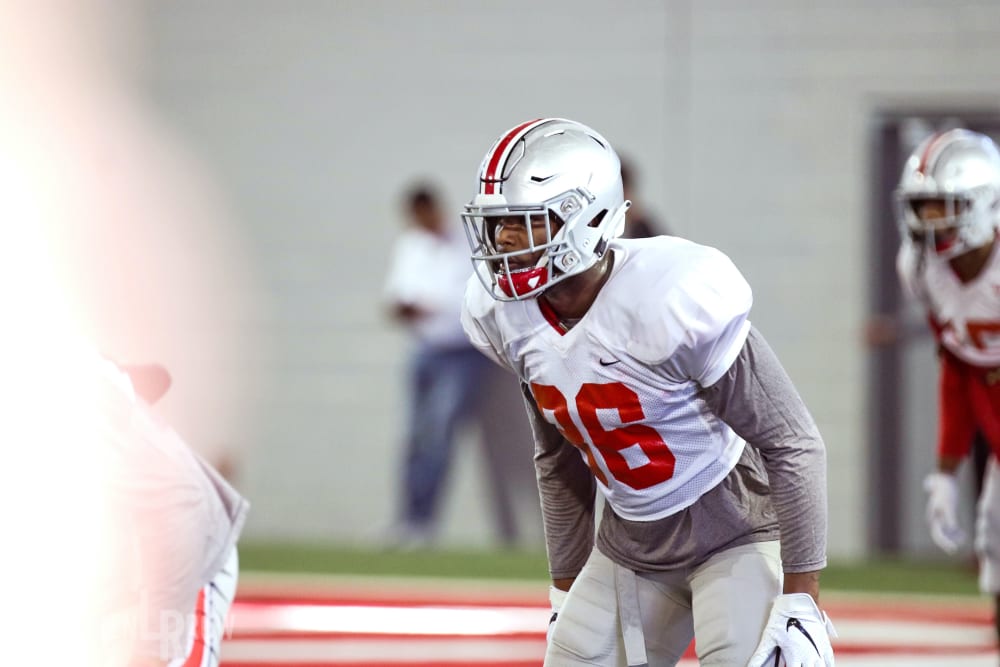 The linebacker unit at Ohio State is a key one to watch this spring. (Birm/Lettermen Row)

Baron Browning and Tuf Borland were limited in practice, and new linebackers coach Al Washington hasn’t tipped his hand on who could be in the mix to start in a crowded linebackers room. Younger players are making a push, though. Teradja Mithcell could be one of those guys.

Mitchell’s only a second-year player, but he could begin to leave his mark on the Ohio State defense as it attempts to recover from last season’s historically uncharacteristic defense.

Day also cited a number of knockdowns by Gant, who may work himself into the fold.

Both Gant and Mitchell were part of the 2018 recruiting class, which Day is expecting a lot out of this upcoming fall.

“If we’re going to be good, those guys have to step up and either become starters or be in the two deep,” Day said. “If they’re not, something’s not right.”

Family time continues to be stressed

Day has made it known that he’s a family man who loves family time. With the stresses that come from coaching in Columbus, Day makes sure to give himself and the other coaches time off every now and then to get home and spend time with their families. That’s why the practice schedule is set up the way it is. They’ll practice Monday, Wednesday and Friday for the next two weeks to allow the coaches to get home on the weekends. That aspect is important to his coaching style.

“There’s not too many weekends for our coaches and their families,” he said. “The players deserve to have weekends, as well. They work really hard.”