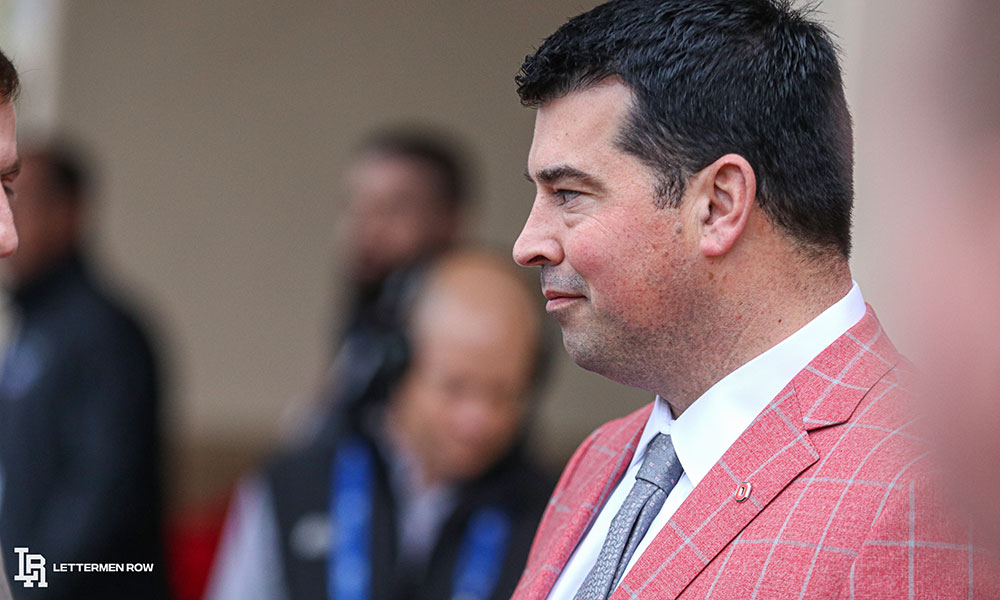 COLUMBUS — The preparations for another run at a national championship are certainly different for Ohio State right now.

They certainly aren’t on hold for the Buckeyes, though.

There are unique challenges for every position group. The individual workouts can’t all be the same based on all the various situations with players spread around the country. And obviously film study isn’t exactly a substitute for the live practice reps that Ohio State was expecting to be getting this month before COVID-19 shutdown all activities on campus.

But eventually Ryan Day and his program are expecting normalcy to return and a season to be played. And while they aren’t making any predictions about when that will actually be, they are attacking each day in the meantime to make sure they are as prepared as possible for the moment when social distancing is replaced by huddles and tackling.

“We’re taking one day at a time, and we’re not sure what the future brings,” Day said in a conference call on Wednesday. “Each week kind of unveils something new that might be coming down the road. So, we’re just going to keep doing the best that we can, and we tell the staff that the No. 1 thing is taking care of their health and their family, then secondly communicate the best we can with our players to try to help them navigate through these times.

“It’s a very strange and unique time. Certainly our thoughts and prayers are with everyone who is being affected by this health wise and their loved ones. It’s been a unique time for our players and our staff, for sure.”

There’s no way to predict when this stretch will end for the Buckeyes, and the plan for managing it is constantly evolving. But Day took nearly an hour on Wednesday to update the media on how Ohio State is currently dealing with the situation, and here’s what Lettermen Row learned from the discussion. 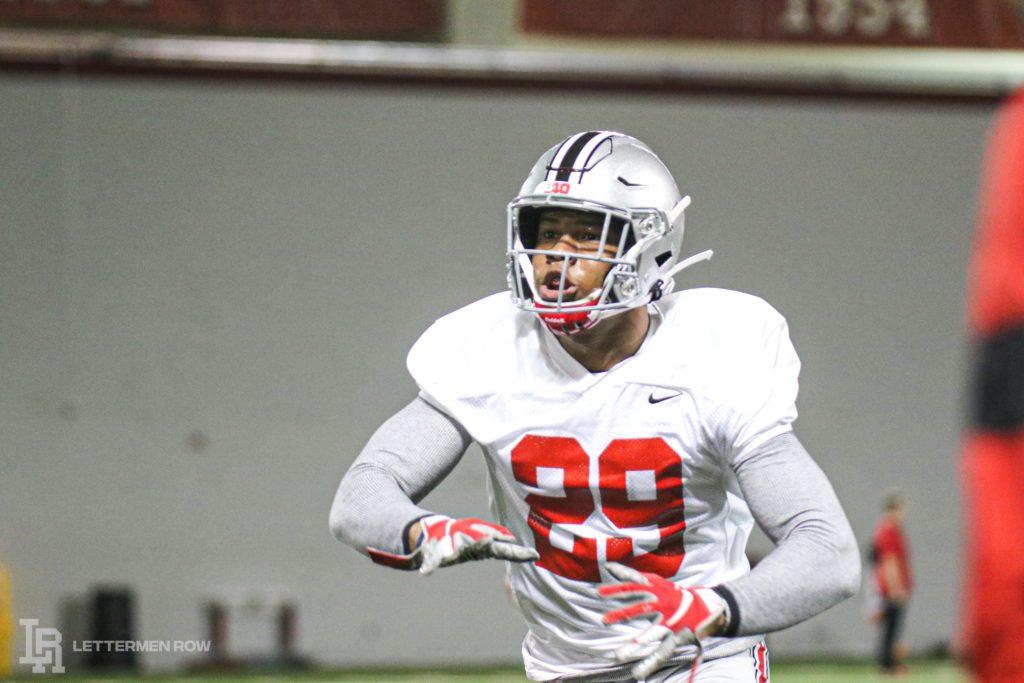 The daily structure in place for the Buckeyes is currently gone, and there’s no real way to replace it. The Woody Hayes Athletic Center is closed, classes have shifted entirely to remote learning and obviously Ohio State can’t even think about coming together for a practice, let alone have position meetings.

The pressure to get work done, then, falls on the individual players and their position coaches. And that’s leading to plenty of hours spent on FaceTime to share film, workout tips or simply get updates on what’s happening with the Buckeyes spread from coast to coast.

“Really when you look at the different guys we have, there are guys in downtown New York City in Brooklyn, guys who are in Hawaii to California and Seattle — they are all over the country. Really, what we’ve been doing is going on an individual basis by position coaches doing an excellent job of communicating with them, and [strength coach Mickey] Marotti has been able to send a few things out. A lot of times those guys are just at their house doing body-weight things trying to keep themselves in shape and stay healthy. We worked really hard to get ourselves in shape and ready for spring practice, so we want to maintain that the best we can given the circumstances.”

No Buckeyes, staffers have tested positive for virus

Ohio State helped lead with a proactive response in the athletic community, and the state of Ohio as a whole has been given credit for being on the forefront of reacting to slow down the spread of coronavirus during this challenging time. Perhaps that has helped keep the Buckeyes healthy at this point, because Day confirmed that the program has had no positive tests for COVID-19 at this point.

Certainly that will continue to be monitored for the team just like it would for anybody else in the general population. But at this point, Ohio State isn’t dealing with any illnesses from the disease while still following the safe practices established by local governments.

“That’s one of those things where we all know that the testing part of it is taking time and everything like that,” Day said. “But there’s nobody in our family right now that we know of that has tested positive.” 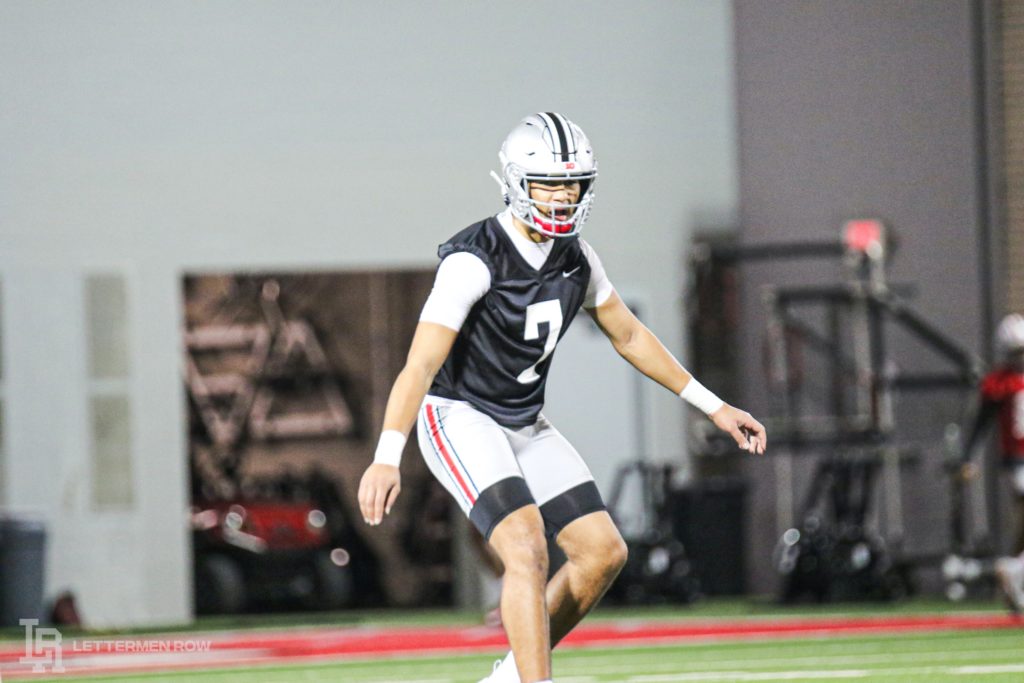 Ohio State was hoping to get a full spring for guys like freshman C.J. Stroud. (Birm/Lettermen Row)

Ohio State could get workouts back in summer

Once football gets the green light to proceed, the first step will be to ensure a level playing field across the country and ensure there is enough time to properly prepare players for the physical demands of the sport.

For Ohio State, that would mean trying to get back the 12 practices and multiple 20-hour workweeks it missed in the spring back. And if the solution includes some sort of NFL-style minicamp, that might actually work in favor of the Buckeyes and a coach who is plenty familiar with that approach given his time in the professional ranks.

“We’re all going to get together as Big Ten coaches and athletic directors, and there is so much stuff coming at us right now, [athletic director] Gene [Smith] is dealing with spring sports and so many other issues,” Day said. “But I already talked to a couple Big Ten coaches about their thoughts, and I do think that some places have already had nine practices, some have had more than that — and that’s a little bit of an unfair advantage. Also, they’ve had 20-hour work weeks, and we’ve only had one and they had several. There’s an inequality there.

“We certainly understand this situation is very unique and we have to take that into consideration, but once we know when we’re going to get back into this thing, then we’ll have to come up with something. One of the models that we need to consider is some sort of [official team activity] that is out there in the NFL. But until we kind of know what the parameters are, it’s hard to create anything. … I’m not sure how that’s all going to look, but I think there are some things out there that are worth having a conversation about.”

There was a binge-watch of Tiger King on Netflix. The coach is trying his hand at using a Crock Pot and working on a chili recipe. And he’s also hoping for more nice weather so he can keep walking around the neighborhood instead of making all of his phone calls cooped up inside like he was for most of last week in rainy Columbus.

This certainly isn’t what the March schedule normally looks like for the coach of a powerhouse football program. But there are benefits for him personally while he also juggles his professional duties from home.

“We’re trying to look at it like, ‘How many times as a football coach are you actually able to spend this much of an extended time with your family?’ Day said. “We’re trying to make a positive out of a negative. Spending time and reconnecting with the family, spending good time with the family. There’s obviously a pandemic going on and it’s stressful for everybody, but we’re trying to do the best we can to keep our minds off that.”

help your buddies, for who cannot give and get great feedback from near [>6 feet] and far?