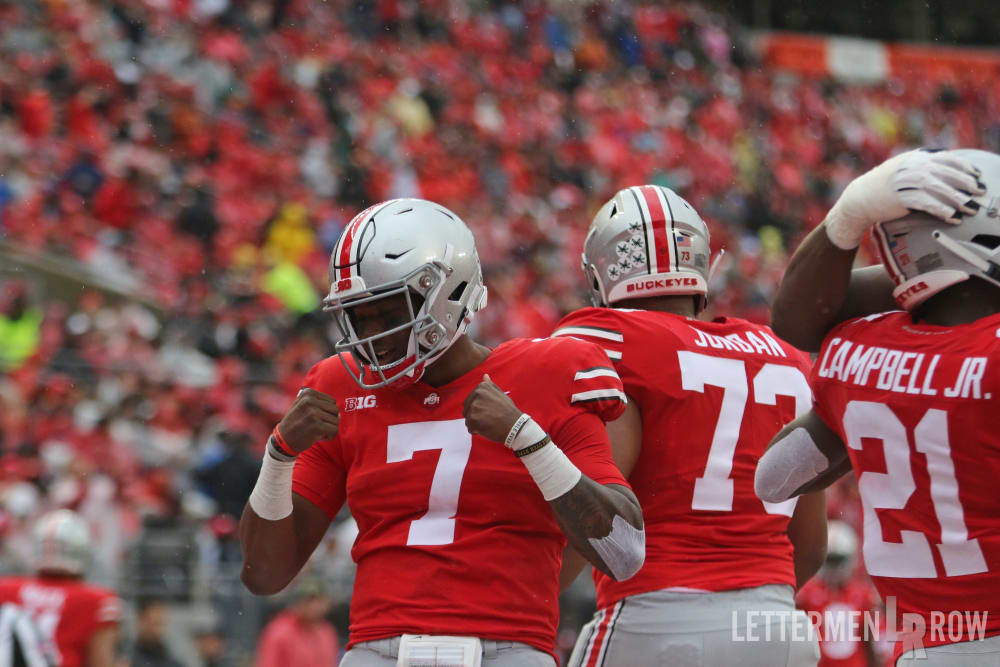 COLUMBUS — The series between Ohio State and Rutgers is almost getting absurd.

This is supposed to be a conference matchup? A divisional rivalry? Are the Buckeyes and Scarlet Knights even playing the same sport?

By halftime on Saturday, No. 4 Ohio State had already built a 35-0 lead in some soggy conditions at the Horseshoe that pretty much ensured there wasn’t going to be much more meaningful action over the final two quarters. And that’s obviously not a surprise when these two programs get together since that dominant first half gave Ohio State 149 unanswered points combined during the last three meetings with Rutgers.

So, let’s not pretend the outcome is going to be any different at the final gun and just skip right to the Snap Judgments from another lopsided laugher as the Buckeyes move one week closer to having Urban Meyer back on the sideline.

The Ohio State passing attack is on another level

There was obviously reason to expect a more dynamic passing attack with Dwayne Haskins at the helm, particularly when it came to stretching the field vertically. But it would have been hard to expect that the leap would be so significant, so quickly with Haskins taking over for J.T. Barrett. And it’s not just the deep shots, although the bomb he delivered right off the bat to Johnnie Dixon was a work of art. Haskins is comfortable firing balls over the middle of the field, confident enough to throw receivers open and mobile enough to create lanes outside of the pocket if needed. The level of competition will jump next week in Texas against TCU, but Haskins continues to look like a star. 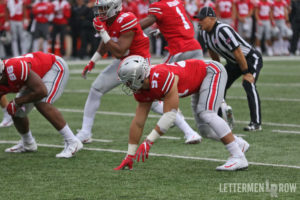 The last place anybody would want to see their name is on a bulletin board that Nick Bosa might see. But for some reason, Rutgers left tackle Tariq Cole decided to point out that Ohio State’s star pass rusher had never recorded a sack against him. It wasn’t necessarily trash talk, but it wasn’t exactly smart, either. Bosa came out clearly motivated and ready to wreak havoc up front for the Buckeyes, racking up three tackles for loss in the first half — including an emphatic sack after beating Cole on the edge that brought a definitive end to that sack drought.

J.K. Dobbins gets his turn for Ohio State

The Buckeyes have made it clear that they’re going to use both elite tailbacks available to them, and that flexibility means it never has to rely on just one to attack a defense. The opener belonged to Mike Weber, but the Rutgers matchup produced a few more chances for J.K. Dobbins in the early going — and he made the most of it with a touchdown and 73 yards rushing. Ohio State seems to have found a way to kick the uptempo attack into a higher gear by not having to substitute tailbacks, and that approach isn’t wearing either guy out since they can alternate drives.

No surprise, but Jordan Fuller is a difference-maker

There will be far better offenses that face Ohio State this season, but any of the concerns about the big plays allowed last week to Oregon State can probably be put aside for now thanks to the return of a healthy Jordan Fuller. Maybe it’s a stretch to think that the Buckeyes were actually playing more confidently with the captain and starting safety back on the field, but it certainly looked that way. Fuller is a safety blanket with his athleticism and ability to read plays combining to help him erase mistakes in front of him, and the Silver Bullets should only continue to improve as the season progresses.