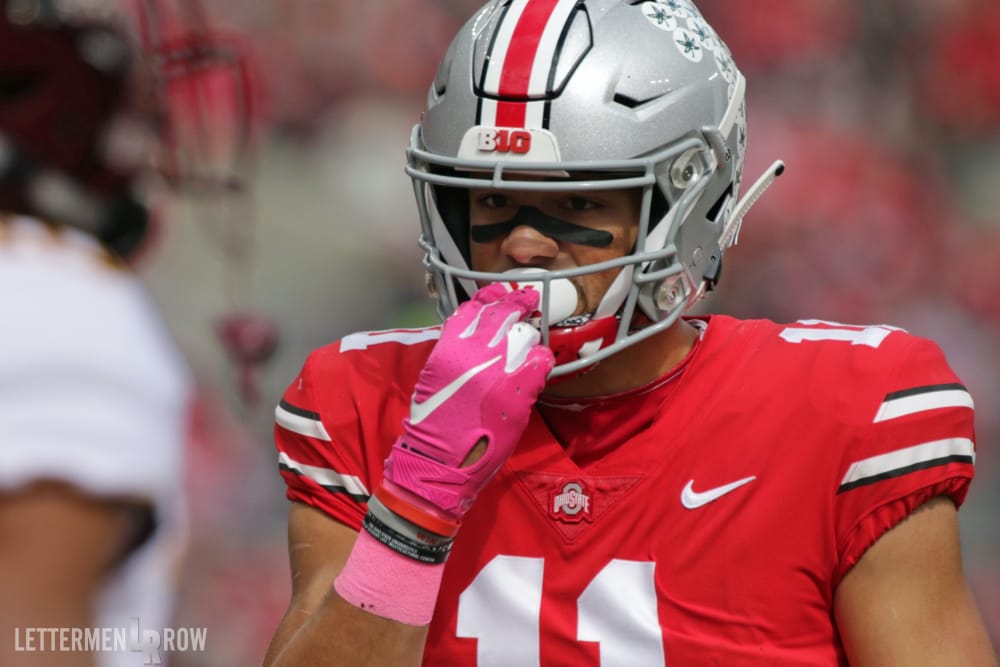 Ohio State plucked Austin Mack away from Notre Dame, but Indiana never had a real chance to land him. (Birm/Lettermen Row)

COLUMBUS — Ohio State co-offensive coordinator Kevin Wilson knows better than anyone how important the state of Indiana can be when building a program.

As the former head coach of the Week Three opponent for the Buckeyes, Wilson once relied on the state’s talent to help bring Indiana back to being a competitive Big Ten squad.

Now that he’s in his third-year with the Buckeyes, Wilson understands why programs like Ohio State, Michigan, Notre Dame and the rest of the Big Ten have continued to cherry-pick the best of the best from Indiana — and Indianapolis specifically.

“I wouldn’t say it’s just us,” Wilson told Lettermen Row. “But whether it’s us, or the South Bend team, or the team in Ann Arbor, big programs have always come to recruit Indiana because there are good football players there. It’s gotten better since the Colts came to town, and the players are getting better because the coaches in the state are getting better.

From that point on, though, the Buckeyes have worn a regular path to and from Ohio’s western neighbor. Now 14 different Indiana natives — 13 if Drue Chrisman is excluded, since he played football in Cincinnati despite living in Lawrenceburg, Ind. — have signed with Ohio State since Jim Tressel’s arrival.

In recruiting, most schools prefer to the bulk of their work inside of a three or four-hour radius of their campus. For Ohio State, that means Indianapolis and most everything around it, is sort of like home. The difference? In Ohio, the Buckeyes are the only Big Ten program. In Indiana, there are two to contend with along with powerhouse Notre Dame.

It’s not easy to go there — and it’s getting more challenging as Purdue and Indiana invest in their football programs. But Ohio State’s brand is one that transcends borders pretty easily. 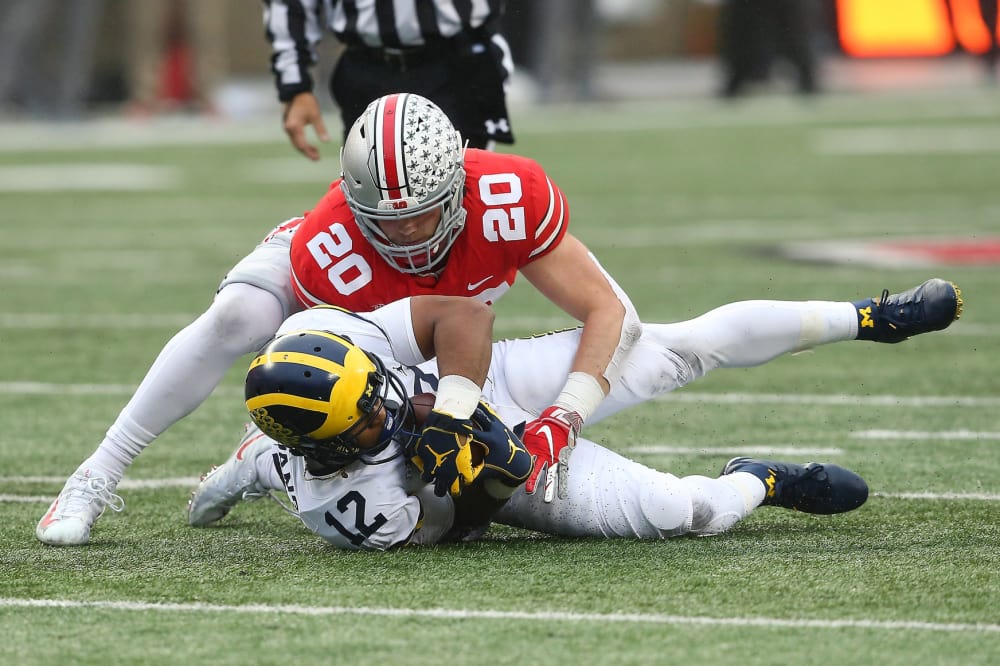 “I had friends go to both of those schools,” Ohio State senior Austin Mack, a Fort Wayne, Ind., native, told Lettermen Row. “I just wasn’t interested. The only in-state school I had any interest in was Notre Dame. The excellence at places like Ohio State, being so close to home, seeing where their guys have gone, it was easy to leave the state.”

Fort Wayne is basically Ohio though, right? It’s not as easy to get players from Indianapolis, even when they do leave the state. It’s an area full of talent, and with Notre Dame so close by, the best of the best from that part of the state aren’t as inclined to head to Columbus. For the Hoosiers or Boilermakers to get the job done, they have to identify a player earlier than the Blue Bloods do, and they also have to have a unique plan of how to market and use that player.

Buckeyes linebacker Pete Werner, though he was committed to Notre Dame for six months in 2016 before flipping to Ohio State, indicated that Indiana actually never made a push to land him despite growing up watching games in Memorial Stadium.

“I grew up going to these games [at Indiana]. We had season tickets,” Werner said. “They kind of recruited me a little bit later, and I wasn’t really happy about that. I had an injury in high school, and they were kind of skeptical of that. Other schools trusted, me so I went ahead with that.” 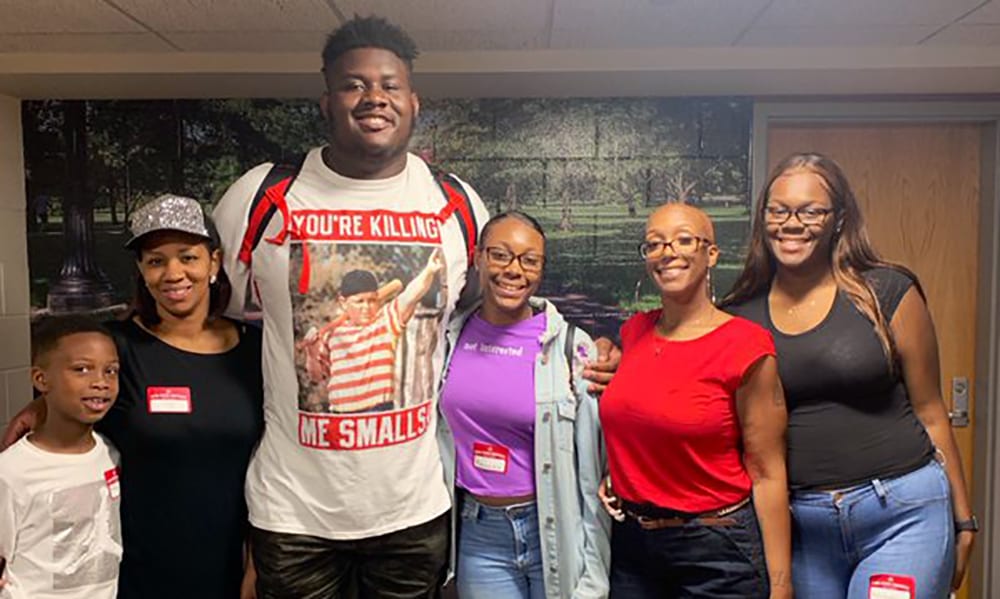 2019 Ohio State signee is one of the next big things from Indianapolis. (Twitter/Ohio State football)

A lot of Indiana players have trusted the Buckeyes with their future in recent years. Rod Smith, Terry McLaurin, Mack, Werner, and others have led to Dawand Jones and Craig Young. The next wave is coming down the line, and Wilson sees Indianapolis as a spot the Buckeyes have to keep returning to.

“It’s a three-hour drive to Columbus from Indianapolis,” Wilson said. “That’s closer than some guys in our own state, so it’s kind of like another metropolis in Ohio.  We just try to get on the right guys and for the most part, kids are always interested because Ohio State is so big and kids want to play in East Division of the conference.

“Every body in the league hits Indiana and Indianapolis, and I know [Indiana coach] Tom [Allen] will continue to do a good job. And [Purdue coach Jeff] Brohm is doing a good job. Iowa comes there. Michigan State and Northwestern do, Illinois too. It’s kind of getting to where Indianapolis is a little bit what St Louis used to be. I think Indianapolis is kind of taking that little niche right now.”

And if that’s where the talent is, the Buckeyes will be stay there, too.