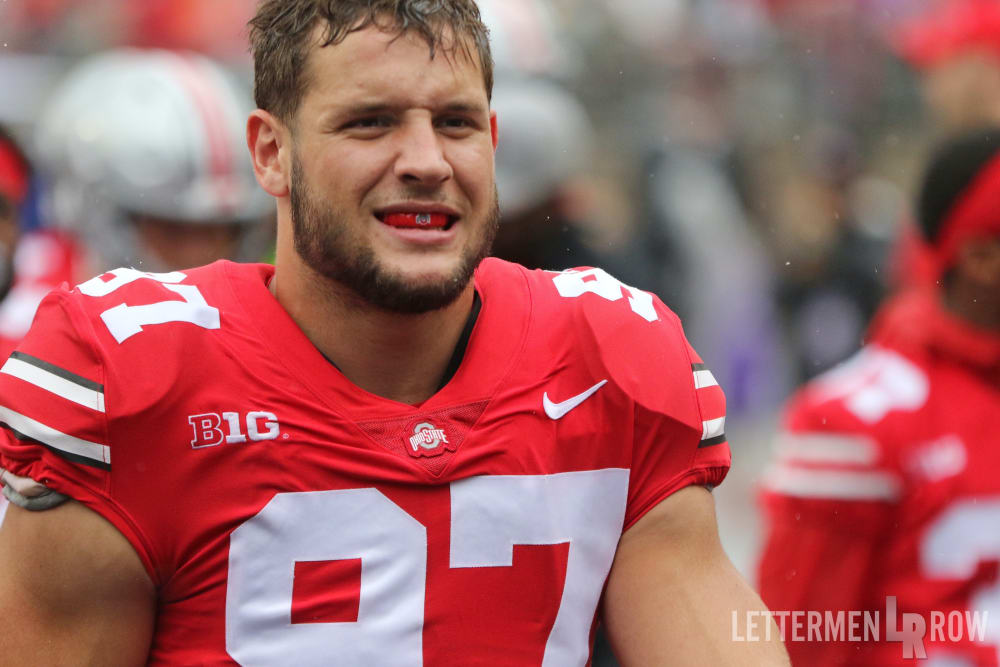 COLUMBUS — Nick Bosa isn’t buying any stock in his own Heisman Trophy campaign.

Ohio State’s star defensive end continues to remain on the fringe of the conversation for the most coveted individual award in college football, and his odds of winning have actually improved after two dominant performances to open the season.

But the bronze statue still remains almost universally the property of players on the other side of the ball, so the junior isn’t getting his hopes up to break that trend with the Buckeyes.

“I mean, I’m just trying to play well on film,” Bosa said after practice on Wednesday. “I’m just trying to make every play that I’m out there a good play and not give anybody anything bad to say about me. The hype is just whatever.

“I don’t think any defensive player is winning a Heisman, so … we’ll see, but I don’t know who votes for it.”

There have been instances of voters in the past elevating full-time defenders into the mix recently, but both Nebraska’s Ndamukong Suh and Notre Dame’s Manti Te’o eventually came up short in their campaigns. That leaves two-way weapon Charles Woodson as the only primary defender in the trophy’s storied history, although Bosa’s dominance is at least earning him some consideration.

The junior captain has already racked up five tackles for loss, three sacks, two fumble recoveries and a touchdown despite basically playing just a half in each of Ohio State’s two blowout victories to open the season. Bosa figures to see more action in what should be a much tougher test down in Texas this weekend against No. 15 TCU, and another strong performance might see his chances of mounting a legitimate Heisman campaign skyrocket.

“I’d love to say, ‘Yeah, let’s get a defensive player in there,'” defensive coordinator Greg Schiano said. “But I think there’s only been one in how many years. The reality is it’s more of an offensive award because it’s easier to chart. It’s easier to make a big deal of touchdowns and rushing yardage and passing yardage, and I understand that.

“Nick is a dominant player in college football right now for sure. There’s awards for that, as well.”

Nick Bosa figures to win a bunch of them at the rate he’s on now for Ohio State.

But the biggest individual prize? He’s not holding his breath.

Nick Bosa wasn’t the only Ohio State player setting the stage for the battle with TCU on Saturday in Dallas. Quarterback (and fellow Heisman Trophy candidate) Dwayne Haskins and linebacker Pete Werner also previewed the game in post-practice interview sessions. Full videos are below.