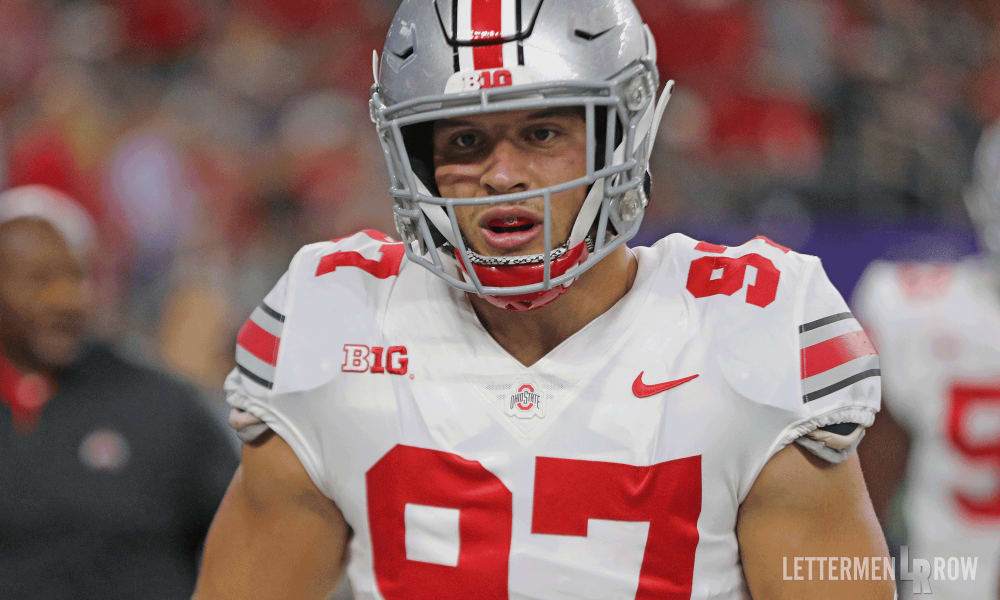 Nick Bosa won't return to Ohio State, per a report from the Columbus Dispatch. (Birm/Lettermen Row)

COLUMBUS — The decorated Ohio State career and a chance to contribute for a national-championship team appears to be over for Nick Bosa.

The superstar defensive end was scheduled for an evaluation of his core-muscle with doctors in Philadelphia on Tuesday after his surgery last month, but Bosa had already made up his mind about his future before the visit.

Citing unnamed sources, the Columbus Dispatch initially reported on Tuesday that Bosa had informed the Ohio State coaching staff on Sunday that he would be focusing on his NFL draft preparation and not returning to the team once he’s cleared from the injury. For a banged-up defense to lose perhaps the best overall player in the country along with a captain is absolutely a major blow to a team chasing a national championship.

“I was hopeful that Nick would be able to return to play again for us,” Ohio State coach Urban Meyer said. “I know this was an extremely difficult and emotional decision for Nick and his family, and I wish him well as he moves on to get himself 100 percent healthy and ready for his next chapter. I want to thank Nick for the remarkable efforts he gave for this program.

“He is a first-class young man who we have been honored to coach.”

The chance to keep doing it are now dashed, despite the fact that Nick Bosa had resumed working out in the Woody Hayes Athletic Center recently, multiple sources confirmed to Lettermen Row. The Buckeyes were targeting a November return for the potential No. 1 overall pick in next year’s draft, but now they’ll have to continue to make do without him.

That will thrust sophomore Chase Young into a full-time role as the starter on the edge. The Buckeyes have dealt with other injuries for the vaunted Rushmen, and last week they were also without starter Jonathon Cooper and had defensive tackle Robert Landers limited by injury. Along with a nagging ankle issue for Dre’Mont Jones, Ohio State has spent portions of the last couple games without its entire starting defensive line.

Urban Meyer weighed in on the Nick Bosa decision Tuesday afternoon during his regularly scheduled appearance on the Big Ten teleconference. Here’s what the Ohio State coach had to say:

“I was hopeful [for a return], like all of us were. But I can’t say I was that surprised.”

For more updates, stick with Lettermen Row. The Buckeyes are scheduled to have players and coaches available after practice on Tuesday night as they move on from the Nick Bosa decision and prepare for Saturday’s trip to Purdue..

Ohio State: No need for Buckeyes to shuffle offensive line
Nick Bosa: Departure of Ohio State star can be both shocking, understandable
Advertisement