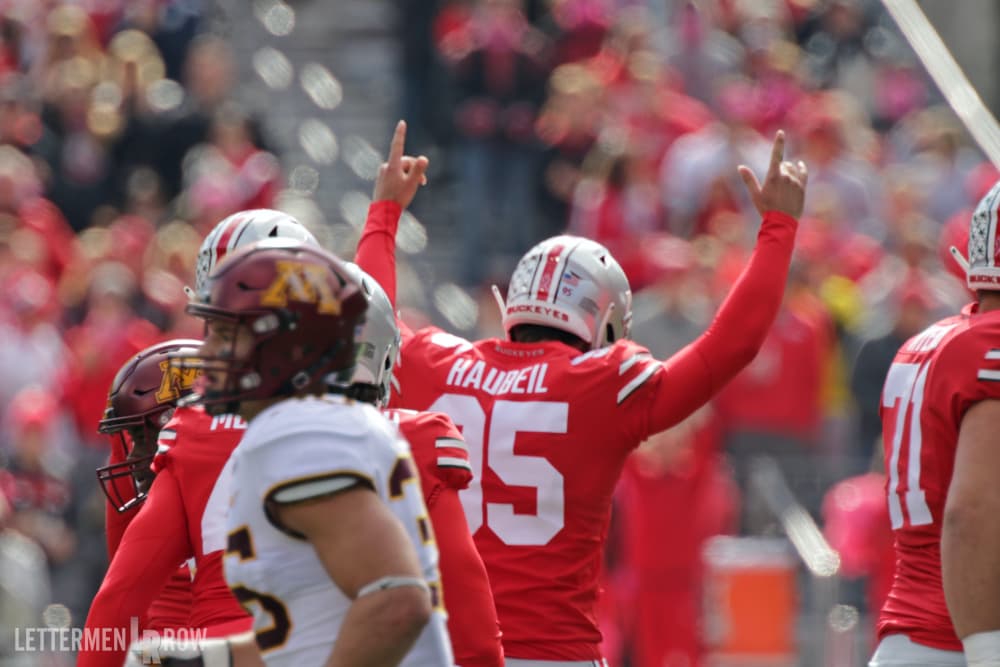 Ohio State kicker Blake Haubeil is now among the Buckeyes who have had to step up due to injury. (Birm/Lettermen Row)

COLUMBUS — When Ohio State sophomore kicker Blake Haubeil woke up on Saturday morning, he had no idea his number was going to be called.

But normal starter Sean Nuernberger was dealing with an injury. So, the Buckeyes had yet another chance to embrace their favorite mantra: Next Man Up.

With his chance to show his stuff, Haubeil stepped up to the proverbial plate and delivered three big hits for his team, connecting on chip-shot field goals of 21 and 27 yards sandwiched around a decisive, impressive 47-yard field goal that would have been good from even deeper. That kick was the longest field goal Ohio State has made since 2014.

“Before the game, they told me Sean wasn’t going to be able to go today,” Haubeil said after Saturday’s 30-14 win over Minnesota. “I was ready to go. I got some live reps before the game with Drue [Chrisman] and Liam [McCullough]. We just went from there and tried to execute throughout the game.”

That type of execution has been hard to find in the kicking game, with that 3-pointer going down as the longest for Ohio State since 2014. And it was certainly unexpected coming off the bench, but that’s become something of the norm for the injury-plagued Buckeyes.

Obviously, a noon home game against Minnesota isn’t the most pressure-filled situation a kicker can face, but Haubeil admitted to feeling some nerves. Kicking in front of 100,000 fans is never easy.

Ohio State has been far from perfect this season, but a slew of injuries to some of the team’s best defensive players and leaders have turned the Next Man Up mantra into standard conversation for the Buckeyes. It’s taken a toll on the psyche of the roster, and it’s clear to see on their faces in post-game press conferences. Urban Meyer has learned to celebrate every win Ohio State collects, but not every celebration is created equally. Saturday’s was likely tepid, at best.

“It’s just tough,” linebacker Pete Werner said. “There are a lot of young guys out there. It’s just hard. We did play a lot better [in the second half], we do have things that we can look forward [to], a lot of things to work with, but then we’ve got young guys in that need to step and play like the actual starters would.

“You’re with those guys and see them go down, and you’re not next to them again. It is frustrating, but you’ve got to have faith in our guys and go on the next play.”

Werner has stayed healthy throughout the season, but he’s seen Baron Browning and Tuf Borland rotate regularly as Borland recovers from a spring Achilles injury. On Saturday, it was former 5-star recruit Justin Hilliard lined up opposite of him as Malik Harrison sat out as the result of an injury suffered against Indiana. Former 5-star defensive end prospects Nick Bosa and Jonathon Cooper were out, too. Dre’Mont Jones and Robert Landers continue to struggle with nagging injuries. Damon Arnette, who has been the most consistent performer among the Buckeyes cornerbacks, he had to leave the game as well — again. 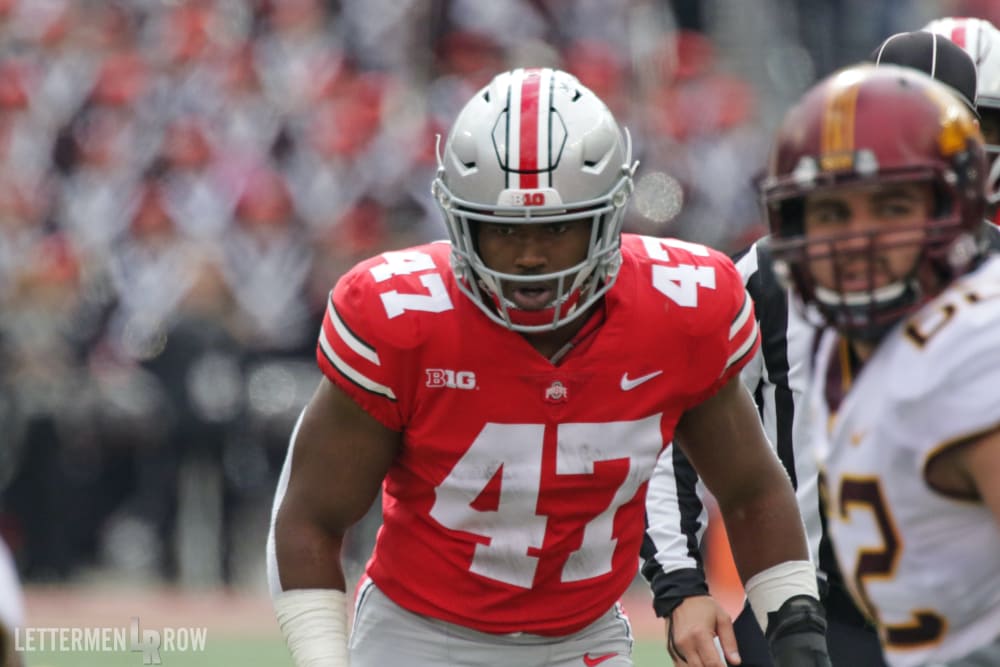 Next Man Up is necessary, even if it’s frustrating. It’s also a chance for Ohio State to get better by building quality depth through unexpected playing time.

“I mean, I wouldn’t say it’s that difficult,” Hilliard said. “Everyone prepares as a starter. In practice, the [backups] get almost just as many reps as the [starters], and we’re watching the same film together. Maybe as far as physical reps it’s tough, but you always have an opportunity to get those reps in and keep getting better.”

The physical reps matter, though, and the Buckeyes haven’t been able to run the same dudes out there every week. That hurts. Is it an excuse? Maybe a little, but that doesn’t change the fact that it’s true.

Ohio State is one of the country’s premier programs and recruits better than any school not named Alabama, but starters are starters for a reason. It’s just not possible to replace a Nick Bosa, or even a Jonathon Cooper and Malik Harrison, without a drop off.

Against Indiana and Minnesota, Ohio State’s untested players have played and struggled in a pair of first halves that underwhelmed, but those could prove to be a net positive for the Buckeyes down the road. Maybe they found a big-game kicker. Maybe they’ve seen highly-touted linebackers emerge as quality and confident depth. Whatever the case, the Buckeyes have more proof that their mantra isn’t just lip service, it’s the only way forward. It’s hope that your roster from top to bottom is ready at a moment’s notice like Blake Haubeil was on Saturday morning.

“I’m just ready whenever they call my name,” Haubeil said. “Whenever that may be. Anticipating. Not being a spectator of the game, just staying engaged in there and being ready whenever my number is called.”

The phone has been ringing plenty for the Buckeyes lately. So far, they’ve kept answering and delivering wins.