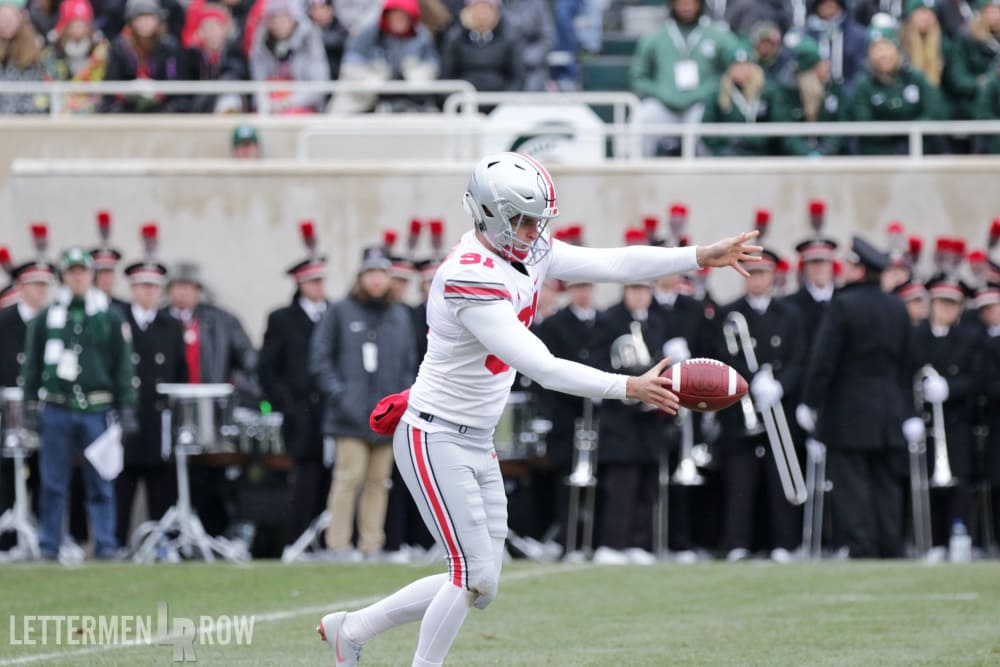 Ohio State punter Drue Chrisman did what he does best and flipped the field in the win over the Michigan State Spartans. (Birm/Lettermen Row)

At its best, it was interpretive art.

Nothing about this evoked thoughts of masterpiece or really even easy on the eyes.

Not about to give it back, though.

Continuing our gameday installment, here are the “Moments that Mattered” as the Buckeyes advanced to 9-1 with a big-time, 26-6 road-win at stingy Michigan State, in the process keeping control of their Big 10 Championship — and all-important College Football Playoff — aspirations.

Clutching a 9-6 lead, Ohio State had again utilized superb special teams play in the form of golf-precision punting and remarkable coverage to pin back Michigan State in the frozen shadow of its own goal line.

This time, OSU broke through. On a wild snap, after possession started at the 2-yard line, Jones exploded through the porous Michigan State line and dived onto the loose football in the end zone. Only the second touchdown of the game for either team, Jones’ timely turnover lifted the Buckeyes to a 16-6 edge.

PARRIS IN THE COLD:

Senior wideout Parris Campbell, an Akron native, hardly was fazed by the temps in the 30s and the wind-chill conditions that registered in the 20s.

Campbell cracked the scoreless tie 28 minutes, 31 seconds into the game when he snagged a 1-yard shovel from Dwayne Haskins, darted around right end as he patiently set up blocks and then exploded into the end zone. The extra point after Campbell’s sixth reception lifted the Buckeyes to a 7-0 lead.

Campbell corralled six of Haskins’ 14 completions in the opening 30 minutes and no other Buckeye had more than two receptions.

Ohio State’s much-maligned defense rose to the challenge on repeated occasions in the first half but particularly so when the Spartans’ offense tried to convert on third downs.

The Buckeyes held their hosts without a single third-down conversion in the opening half despite multiple short-yardage situations. The very first third-down situation in the game was a third-and-1 that OSU cleanly stuffed; Sparty was awarded the fourth-down conversion in a scenario that the Fox broadcast team labeled, “questionable” and “a favorable spot.”

Typically one to back his offense, Urban Meyer somewhat surprisingly elected to play field position with a punt on fourth-and-4 from the Spartans’ 38-yard line.

With the punt bounding inside the 2 and apparently heading straight for a touchback, the acrobatic and selfless Terry McLaurin went vertical and horizontal in sacrificing his body to bat the ball behind him back into the field of play, with teammates downing the ball at Sparty’s own 5-yard line.

And after the Spartans saw Rocky Lombardi fire incomplete on two of his three pass attempts, MSU punted back to the Buckeyes who then took over just past their own 40-yard line.


The day hardly could have started more auspiciously for Ohio State punter Drue Chrisman. In the cold, blustery weather, Chrisman mangled a 4-yard punt that set up Sparty for an opportunity the defense denied to allow it capitalize upon.

Chrisman was arguably the game’s MVP the remainder of the day. He punted eight more times after that mishap and booted six of them inside Michigan State’s own 20-yard line. Chrisman had a particularly dazzling five-punt stretch in which his boots were pinned at the 5, 6, 3, 1- and 2-yard lines.