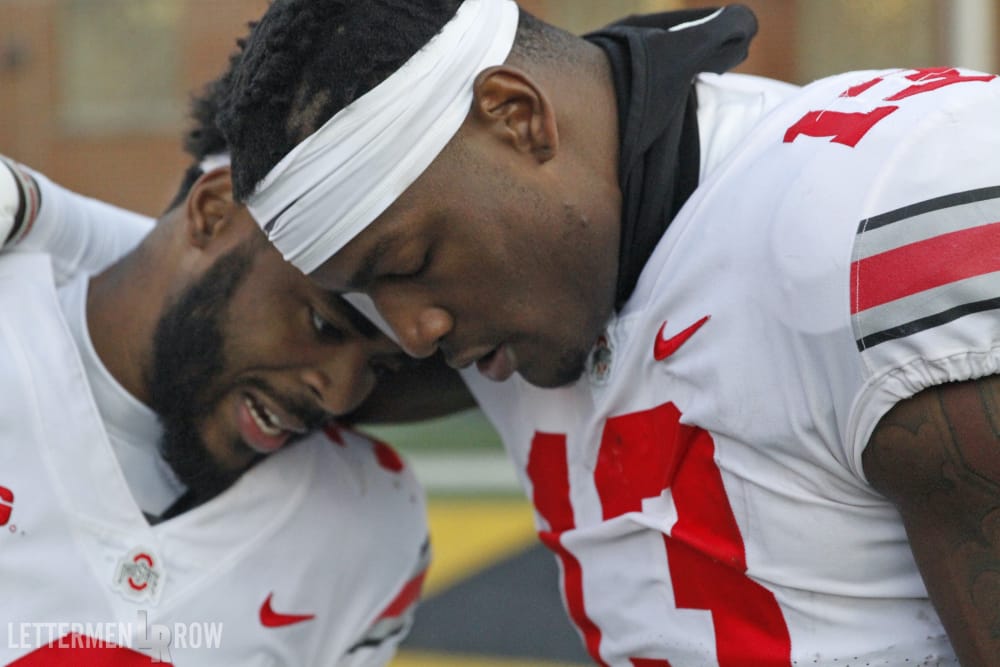 Each week it seems that crazier, more unbelievable drama unfolds. For some reason, though, the audience just can’t quite turn it off.

On Saturday, unlike what happened at Iowa last year or at Purdue last month, the Buckeyes didn’t turn it off, either. And it’s the only reason this insane series is continuing with a championship still in reach.

In a year when everything has seemed to go wrong, Ohio State took shot after shot from a Maryland team that was a double-digit underdog and kept getting itself off the mat. The Buckeyes are 10-1, but it’s felt like they were apologizing after every win. But in a season that has been nothing short of a circus since the start of August, every single winning moment should really mean more.

Ohio State has been beaten up, vilified and embarrassed. The Buckeyes have watched their head coach crumble both literally and figuratively as health issues and scrutiny from his handling of a former assistant weighs him down. They’ve seen a team captain and the heart of the defense leave the program to prepare for the NFL. They’ve dealt with the shock of another ass-kicking at the hands of an under-matched opponent at Purdue, and on Saturday it felt like they were heading that way again.

But after appearing to go through the motions time after time, there appears to still be a heartbeat in their collective chest after all. When the easy thing to do was fold like they did in Iowa City and West Lafayette, the Buckeyes held their ground.

“Just a whole bunch of emotions came out of me,” said Dwayne Haskins, who threw for 405 yards and accounted for six touchdowns. “All of that grit and all of that adversity that we overcame in this game to come out on top, it just means everything for myself, my teammates, the coaches.”

It was a game the Buckeyes seemed destined to lose from the start. Maryland’s rushing attack staggered Ohio State, sure. But it was a series of crazy bounces that all went the way of the Terrapins that made Saturday feel like something out of a horror movie.

A kickoff that bounced right back to Maryland. A phantom fumble by J.K. Dobbins when Ohio State was going to tie the game right before half. A tipped pass that landed softly in the arms of Maryland defensive back Ravon Davis just two plays into the second half. A tipped pass caught for a touchdown, a Maryland fumble into the end zone for a score and a pair of Terrapins fumbles that bounced right through Buckeyes defenders hands, among other things.

The ball seemed to bounce Maryland’s way on Saturday, but the Buckeyes bounced back. (Birm/Lettermen Row)

Everything that could’ve gone wrong for the Buckeyes did. Hell, even when the Buckeyes did things right, like stuffing the Terrapins and causing a fumble by Anthony McFarland late in the fourth quarter, things went wrong.

But this time, Ohio State bowed their backs and relied on a pair of Maryland natives, Haskins and Chase Young, to keep going when things looked dark. Young, who had two sacks, knew his team wasn’t going to quit, even though they knew things were going wrong early and often. There were no hanging heads in College Park.

Is that growth? Is it a team that decided to not feel sorry for itself anymore?

“I wouldn’t say it’s discouraging,” Young said of the defensive effort. “I think we definitely have to improve on a lot of things, but just knowing that my brothers are going to fight to the end and just knowing they’re always going to have my back and I’m going to have their back. That’s a good feeling going into the next game.”

The next game is Michigan. It’s a game that needs no hype videos. It’s a game that will determine the Big Ten East champion and could allow Ohio State a chance to wipe out months of frustration, negativity and bad tastes, a season to forget that is coming down to one game to remember.

The Game still matters and has maximum stakes. But only because on Saturday at Maryland, Ohio State decided it wasn’t going to quit.