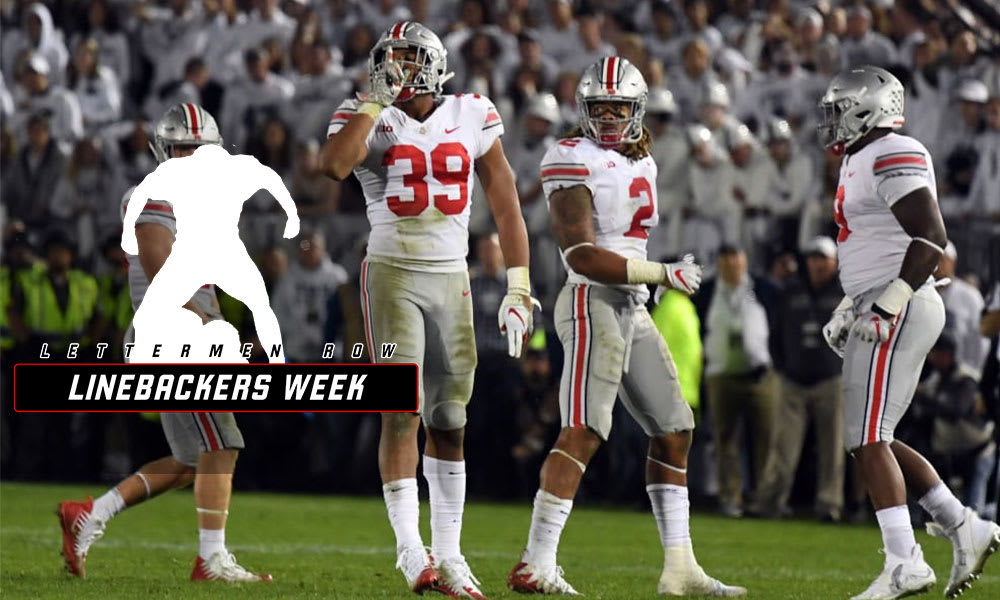 Malik Harrison emerged for Ohio State a season ago at linebacker. (Birm/Lettermen Row)

COLUMBUS — Al Washington has some decisions to make for the Ohio State linebackers.

The first-year Ohio State linebackers coach has a room full of talented players, and he’s on record that playing last year doesn’t matter when it comes to this season. So, Washington will have to decide whether to stick with Malik Harrison, Pete Werner and captain Tuf Borland — or go with younger guys who are itching for playing time.

Harrison will likely gather preseason awards. But beyond that, the Buckeyes have a lot of unanswered questions. It’s Linebackers Week at Lettermen Row, and we have five burning questions for how things might shake out for one of the Buckeyes most important position.

How good can Malik Harrison be for Ohio State?

Harrison could have left for the NFL after his junior year, but he decided to return for his senior season to lead the linebackers and anchor a defense looking to bounce back from a historically bad season. He and safety Jordan Fuller, who also passed on the NFL to come back, led the Buckeyes with 81 total tackles on the season.

Harrison also proved to be a capable pass rusher when he needed to be. He logged three sacks last year as he burst onto the Ohio State scene. When he decided to come back for a final season at Ohio State, he raised the defensive ceiling for the program. Now, he’s on a path to be one of the best linebackers in the Big Ten under new linebackers coach Al Washington.

Will Tuf Borland bounce back?

Borland’s play last year was questionable for the Buckeyes, but his Achilles injury last spring may have had something to do with that. Borland has played in all 14 games in each of the last two seasons, and he’s only a junior. As a captain a year ago, he was third on the team with 67 total tackles.

So can he have a better year under the new defensive coaching staff? He’ll likely be named a captain again this season, which means his expectation will be to have a much better season, and the Buckeyes will be expected to cut down on allowing big runs under Borland’s watch. He needs a big season.

Borland and Harrison started a year ago alongside Pete Werner, but Washington said this spring none of that matters. Washington wants the best players to play. If Werner or Borland aren’t in that category, they likely won’t start. Plenty of guys are in the mix. Harrison is effectively guaranteed to be a starter. But what Washington and defensive coordinator Greg Mattison decide to do with Werner and Borland are still anyone’s guess and will depend on what happens in training camp.

What about Baron Browning and Teradja Mitchell?

Baron Browning and Teradja Mitchell are squarely in the mix, and they both had a good spring. That set each of them up for at least a position battle in the middle. Browning’s a former 5-star recruit from Texas who has the talent to play, but he’s only been on the field for a limited time through two seasons. Browning has been vying for playing time since he stepped on campus.

Mitchell, meanwhile, made his statement in the spring and now finds himself gravitating toward playing time as fall camp approaches. Both of them are in good positions, and good camp performances could make Washington’s decision even harder to make.

Who are the Buckeyes likely targets at linebacker?

Mitchell Melton, the 51st-ranked linebacker in the 2020 class, is a priority for the Buckeyes. He grew up an Ohio State fan, so that gives Ohio State a leg up, but his recruitment is far from over. Recruiting guru Birm seems to think Melton’s recruitment is heating up:

“Notre Dame has not, to this point, been as aggressive as the Buckeyes and Wolverines have been but as noted, that’s likely going to change. I think a decision from Melton should come sometime soon after his official visits are made in June and as of now, I believe that Ohio State is still the team to beat.”