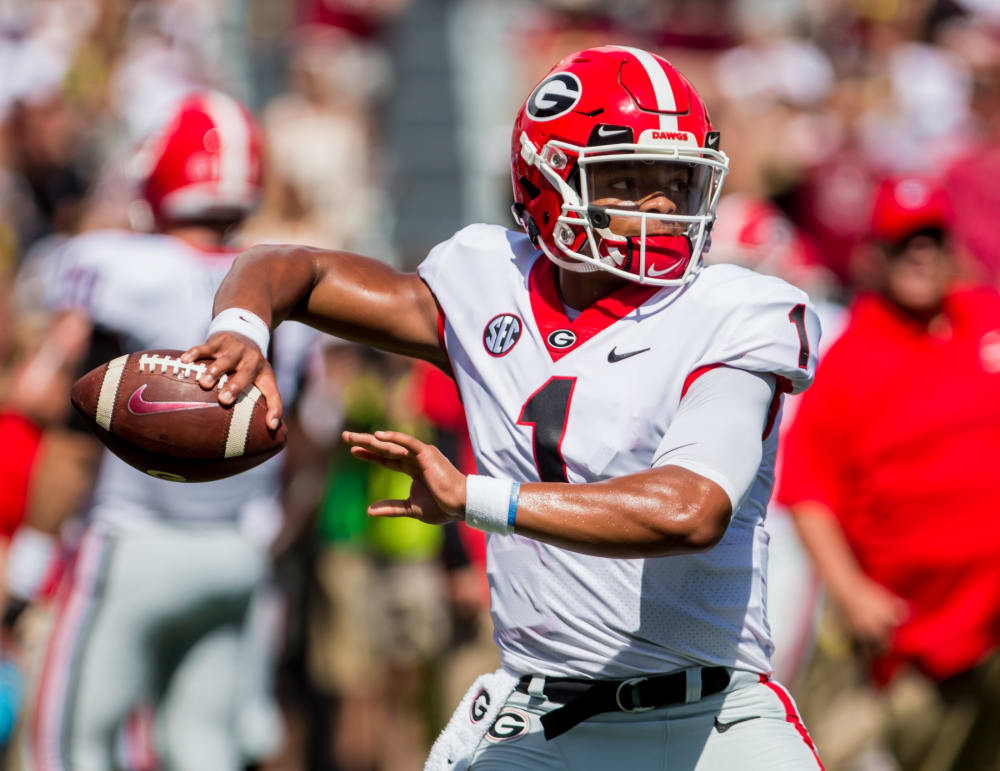 COLUMBUS — Ohio State wanted another quarterback, and all it did was go out and land perhaps the best possible option on the market.

Justin Fields is leaving Georgia, joining the Buckeyes and potentially looking to become eligible right away pending an appeal to the NCAA. That process might take months before being settled. But in the meantime, Fields is already cleared to start competing on campus to potentially set the stage to be the next starter for Ohio State and the successor to his good friend Dwayne Haskins.

There’s really no understating it: This is a massive addition for Ohio State. The impact will also ripple around the program, most notably in the quarterback room that will now be dramatically revamped.

What does adding Justin Fields mean for the Buckeyes? Lettermen Row looks at the new dynamic facing the key individuals involved to start breaking down what happens from here now that Fields in the fold — excluding Dwayne Haskins, since this move all-but-ensures he’s heading to the NFL Draft. 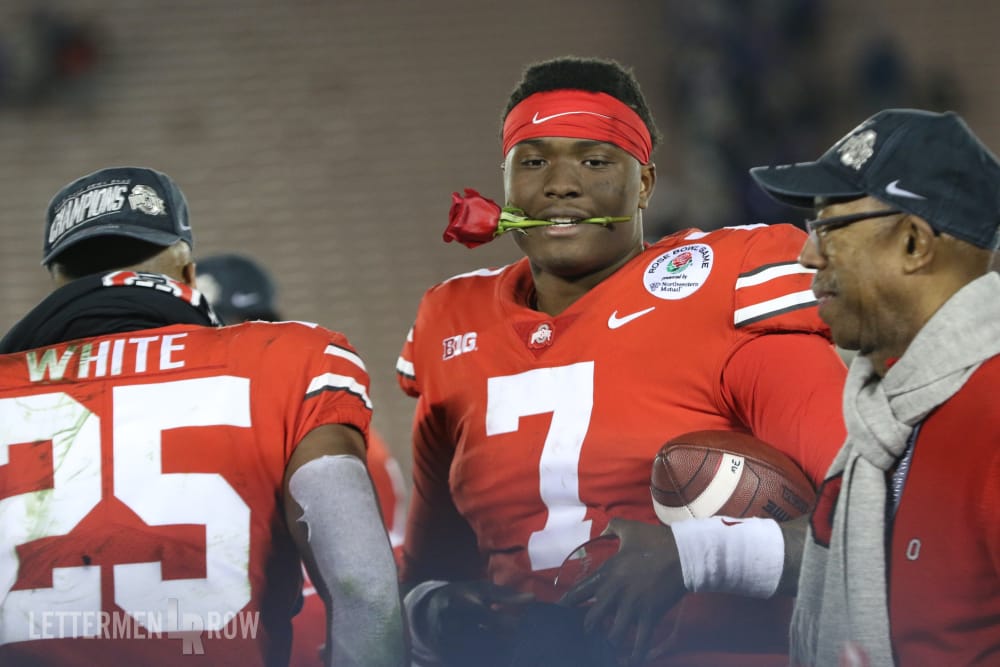 Dwayne Haskins is now even more likely to be leaving Ohio State for the NFL Draft. (Birm/Lettermen Row)

Start with the obvious: Justin Fields is heading to a new program, getting ready to meet new teammates — and about to get a crash course in a new offensive system. There’s nothing easy about learning a different playbook, but that’s exactly why it’s so crucial that Fields identified Ohio State early on so that he could enroll in time to participate in the offseason conditioning program and spring practice. The talent that made him one of the most touted quarterback recruits in the last few years didn’t leave him during his lone season at Georgia, and he flashed it when given a couple opportunities to play off the bench. Having seen what Dwayne Haskins did in his only season as a starter, Fields clearly envisions the same sort of productivity given the similar set of skills he brings to the position. There will still be a competition for the job coming in the months ahead, and he’s playing from behind when it comes to Ryan Day’s offense. But if his appeal is approved, his upside makes him a prime candidate to take over the attack.

The dual-threat backup didn’t mince words during practices leading up the Rose Bowl. Tate Martell declared himself “100-percent” confident that he would be the next starter, and he essentially issued not-so-subtle warnings to Fields that it wouldn’t be easy for him to just show up, read the playbook and beat him out for the job. That confidence is certainly admirable, and it’s part of the reason why Urban Meyer was so fond of him and wanted that competitive spirit used on the field somehow last season. Martell also made it clear that he would fight for the position and wasn’t planning to transfer anywhere even if Fields enrolled, which could set up an interesting dynamic in the event that the new guy does wind up winning the battle. Martell knows the clock is ticking on his career, and after already sitting on the bench for two seasons, it will be interesting to see where he stands at the end of spring and what that means for his future. 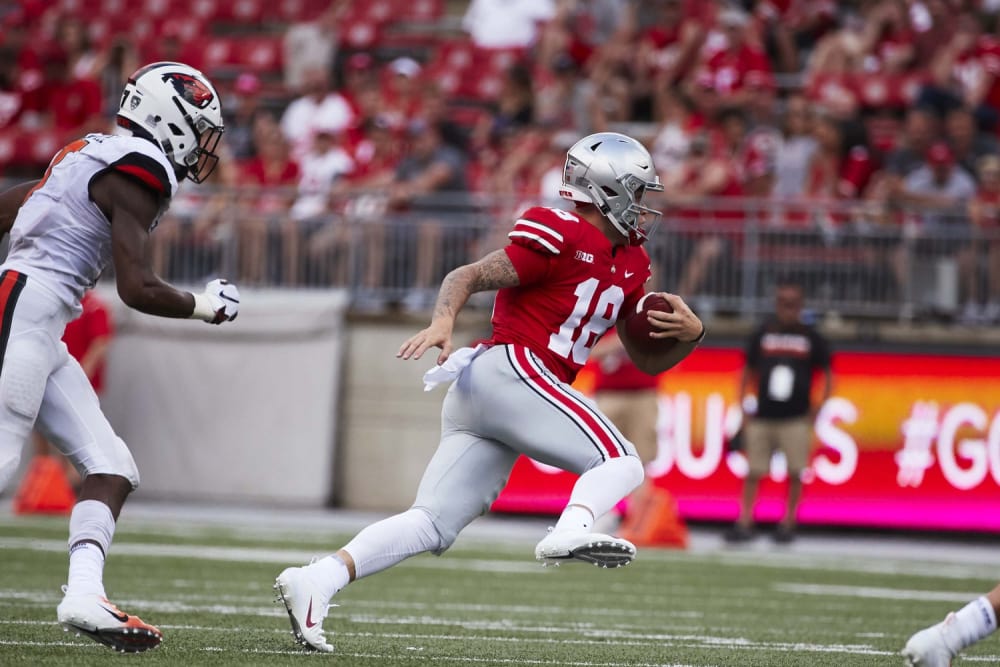 Thanks to the need to rehab his knee for much of his true-freshman campaign, Matthew Baldwin wasn’t able to get quite as much out of his first year on campus as he would have ideally liked. But the strong-armed passer from Texas also wasn’t in a rush to get on the field, always heading for a likely redshirt and more than willing to sit back and absorb the system without the pressure of being on the field right away. The arrival of Fields and the possibility that he could be a starter for the next two seasons might scare some quarterbacks into an instant transfer, but Baldwin has already shown that he can be patient. At the quarterback factory at Lake Travis High School, Baldwin had a chance to transfer out as a sophomore rather than sit on the bench waiting for his turn. Instead, he stuck it out and made sure that he was fully prepared when his moment arrived. Given his class standing, Baldwin could still be looking at two full seasons as the starter if he follows a similar blueprint at the college level.

If there’s a clear winner right off the bat, it’s undoubtedly Ryan Day. In his first full-time week on the job, he landed one of the most coveted quarterbacks in the country, which is even more validation that his system is appealing to elite-level passers. Obviously Dwayne Haskins played a big part in selling that to other quarterbacks down the road, but Day deserves a lot of credit for how he developed the Heisman Trophy finalist and the record-setting passing numbers Ohio State put up this season. As the Buckeyes continue to evolve on offense and work to enhance the aerial attack, Day looks like a coach who could have his pick of quarterbacks to load up the pipeline for years to come. 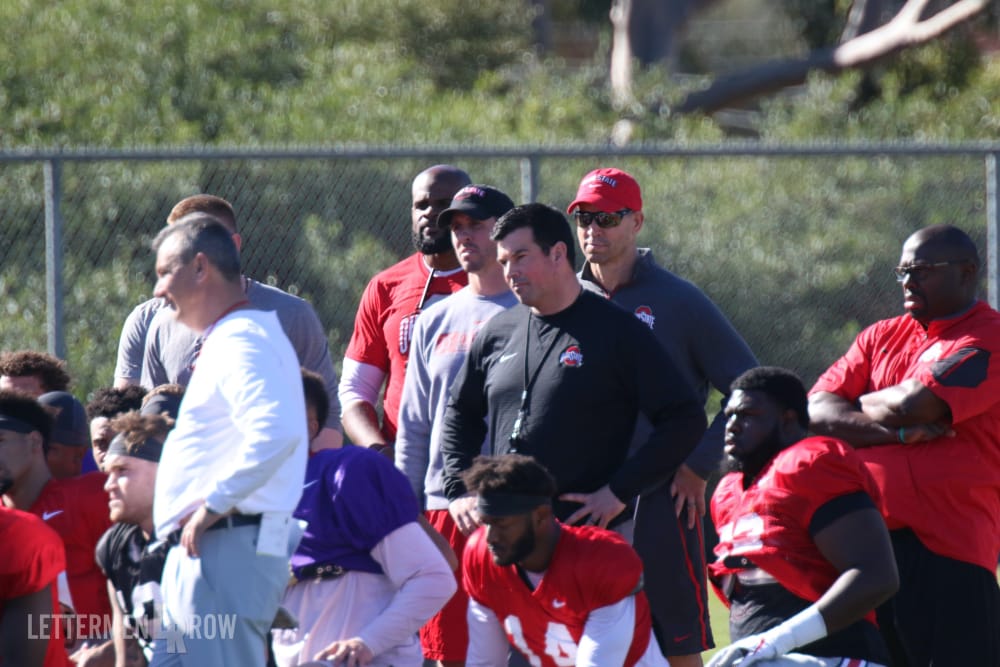 The 2020 commit to Ohio State isn’t on campus yet, and adding Fields now isn’t likely to change much for Jack Miller and his recruitment. As talented as the four-star passer might be, he’s not realistically going to be a starting option for a few years as he continues to develop physically, adjust to life in college and start learning the playbook. If Fields maximizes his potential, his physical tools could have him jumping to the NFL after two seasons with the Buckeyes. And while that might be a premature projection, if that’s not the kind of player Fields becomes, Miller would probably have even less reason to worry about how the depth chart looks when he arrives.

Welcome to Ohio State, Mike Yurcich. Enjoy the quarterback battle and the spotlight right away in the first year with the program. Clearly Yurcich wanted the kind of intense pressure that comes from working with the Buckeyes or he wouldn’t have taken the job. And part of the appeal to signing on with Ohio State is working with the talent the program attracts — starting with guys like Fields, Martell and Baldwin. Spring practice and training camp could again become something of a circus with one of the most high-profile starting jobs in college football up for grabs, and Yurcich is going to be right in the thick of it. The Buckeyes might not need long to find out exactly what they have in the new passing-game coordinator.