COLUMBUS — Breaking records with track-star speed the way Jameson Williams did in high school is going to get the attention of Ohio State anywhere.

But when it’s a mark held by Ezekiel Elliott? Well, that’s a surefire way to make sure the Buckeyes are perked up and looking closely at a prospect.

Williams already had plenty of eyes on his exploits on the football field either way as he unleashed his athleticism and developed into a four-star wide receiver in St. Louis. But it was the blazing work on the track and the record-breaking time in the 300-meter hurdles that helped push him over the top, and the Buckeyes have proven many times over that they know exactly what to do with that kind of talent — especially at a position of need.

“We lose three really good wideouts and a lot of good leadership in that room,” Ohio State coach Ryan Day said. “They’re going to leave a legacy, though, of hard work and leadership that’s hard to replace. But we think we’re replacing them with some really talented young guys. Jameson Williams is a deep threat who has legitimate track speed.

“He can really go. Comes from a great family, great program in St. Louis, so we’re excited about him.” 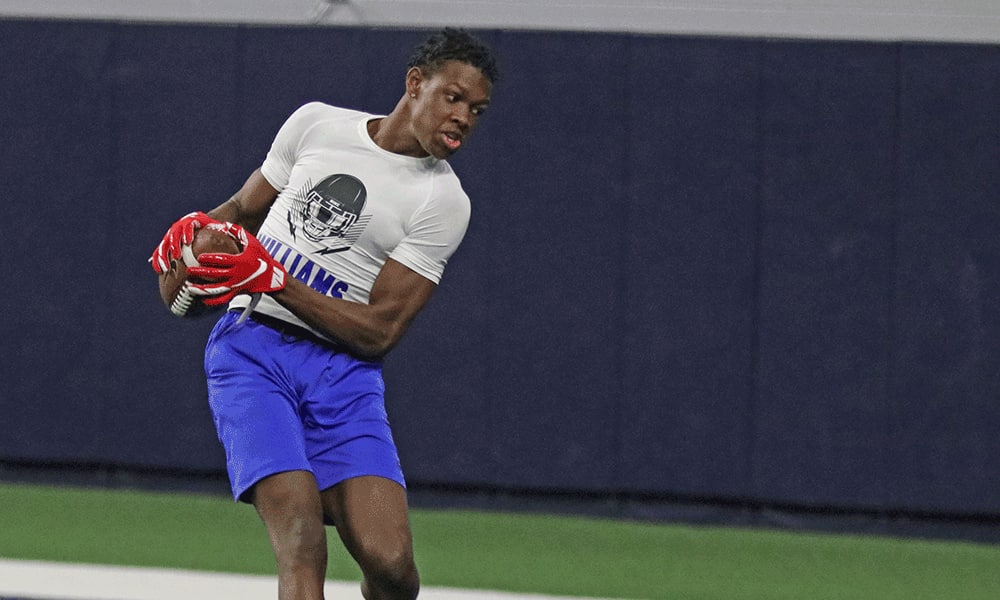 The addition of Williams officially on Wednesday certainly comes at a great time for the Buckeyes, which is another reason there’s so much buzz about him and Garrett Wilson. A veteran-heavy unit that helped set the tone for the highest-scoring attack in the Big Ten is set to lose Johnnie Dixon, Terry McLaurin and Parris Campbell for sure — and K.J. Hill might declare early for the draft.

That’s a lot of production to replace, of course, and that’s where Williams could potentially be in line to provide a jolt of electricity right away. Clearly he’s a guy who gets things done in a hurry, which his highlight reel reflected when former Ohio State wide receiver Evan Spencer popped it on in the Lettermen Row film lab.

The latest episode of BuckIQ puts Jameson Williams in the spotlight and looks at just how the new signee could help Ohio State once he arrives on campus.

Jameson Williams: How the speedy wide receiver can help Ohio State
Watch this video on YouTube.

Ohio State: Jeremy Ruckert turning adversity into opportunity for growth
Ohio State: New role for Urban Meyer should be winner for all involved