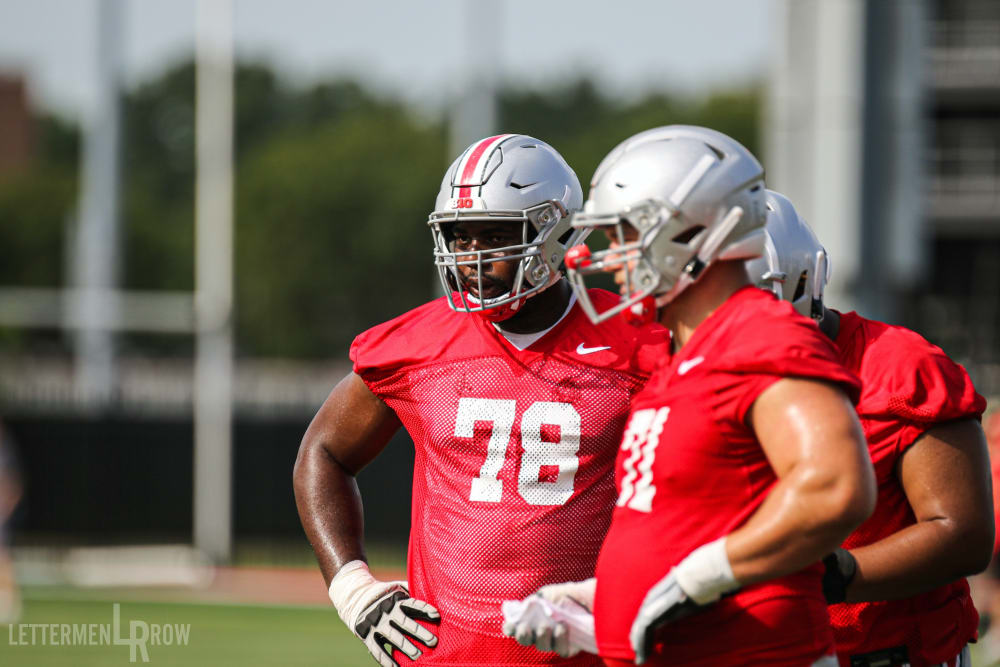 Ohio State offensive tackle Nicholas Petit-Frere is in a battle for a starting job for the Buckeyes. (Birm/Lettermen Row)

The speculation, debate and conversations about Ohio State never end, and Lettermen Row is always ready to dive into the discussions. All week long, senior writer Austin Ward will field topics about the Buckeyes submitted by readers and break down anything that’s on the minds of the Best Damn Fans in the Land. Have a question that needs to be tackled, like the one today about the Ohio State and the offensive line? Send it in right here — and check back daily for the answers.

Seems like the offensive line is still unsettled. Who are the starters and how have they looked in the run game? Run game feels like more of a need this year.

No, Ohio State hasn’t settled on a group of starters for the offensive line. But that is probably the surest sign that the program is on pace to get the unit back on track to performing at a championship level.

For the first time in years, the Buckeyes have real depth, actual versatility and the ability to decide whether it would rather rotate fresh bodies up front or allow chemistry to grow with a consistent group of five guys. Honestly, Urban Meyer never had any of those luxuries and spent his entire tenure with the program trying to rebuild the offensive line into the kind of shape that Ryan Day has now inherited during his first season in charge.

The Buckeyes are clearly inexperienced after losing four full-time starters after their latest Big Ten championship campaign. But position coach Greg Studrawa has never had this much raw talent to work with at Ohio State, and the fact that he doesn’t have a clear-cut depth chart after just one week of practices is a welcome change for him.

A healthy Thayer Munford isn’t going to be displaced at left tackle any time soon. Rutgers graduate transfer Jonah Jackson would appear to be a relatively safe bet to start the opener at left guard, Josh Myers is well on the way to solidifying his role at center and Wyatt Davis is effectively entrenched at right guard. But right tackle remains up for grabs between Branden Bowen and Nicholas Petit-Frere, Joshua Alabi proved with his fill-in start in the Rose Bowl that he can perform at a high level off the bench — and Harry Miller has wasted absolutely no time looking like a potential contributor even as a true freshman.

“I feel as good as I’ve felt in the last couple years in terms of our depth,” Day said. “We have seven or eight guys that can get in there right now and play.

“When you look at it, guys with experience out there, probably more than we had in the past. Then we’re encouraged by some young guys. Maybe we’ll be playing depth as it goes on. If guys deserve a chance to play, we would roll guys like we did at receiver last year.”

It would still qualify as a surprise if the Buckeyes did substitute as freely up front as they do at other positions given the usual emphasis on developing chemistry, consistency and familiarity on the line. But the fact that Ohio State is even able to consider it is a clear sign of progress and surely a comforting thought for Day, who should have a sturdier security net than Meyer even had in the trenches.

The Buckeyes had some well-documented issues at times last season as run blockers, particularly in short-yardage situations. And by their own admission, there were struggles adjusting to the Run-Pass Option schemes the program was using while playing in a system that clearly favored the passing attack with Dwayne Haskins at quarterback.

But if Ohio State played on its heels a year ago, it should be back on its toes now. For one thing, it is going to have more of a rushing threat at the position with Justin Fields running the attack. And while Fields gets his feet wet early, the play-calling will almost certainly lean more heavily on a downhill ground game with J.K. Dobbins returning in the best shape of his career at tailback and a star-studded group of former recruits ready to tap into their enormous potential on the line.

“I had a really good feeling we were going to be as deep as we’ve been,” Studrawa said. “That hasn’t disappointed me. We’re right where I thought we’d be. The competition is unbelievable.”

Does that mean the starting lineup is unsettled for the Buckeyes? Maybe. But they certainly aren’t uncomfortable with their options, because they’ve got more of them than the program has had in years.