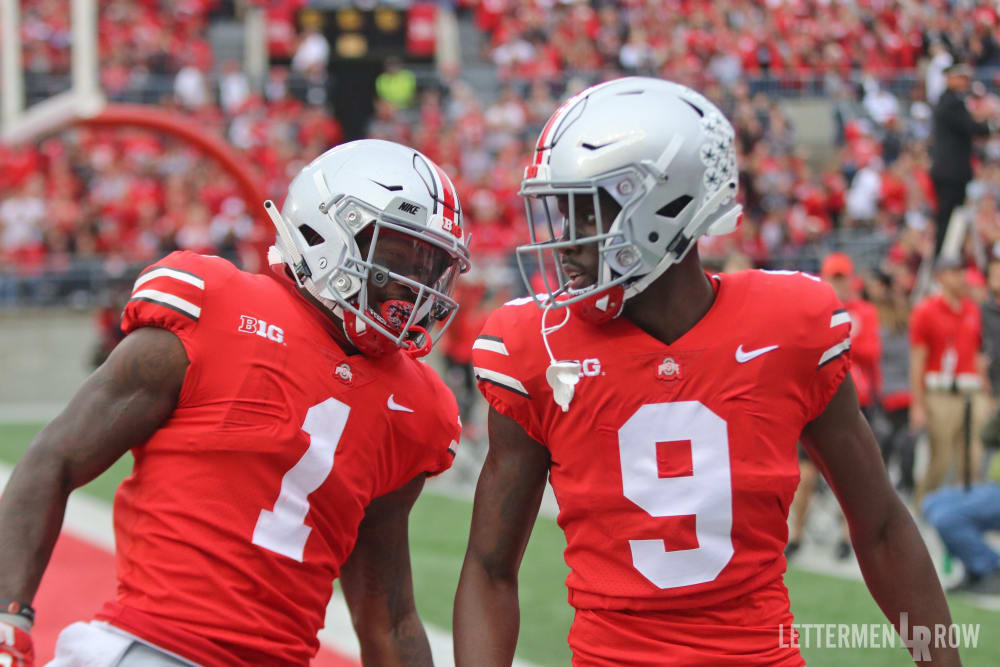 COLUMBUS — Welcome to a whole new world at Ohio State, where the offense is enjoying a new fantastic point of view.

Thanks to the emergence of Heisman candidate Dwayne Haskins and a wide receivers room full of veteran leaders, three yards and a cloud of dust has turned into a three-step drop and fire.

Urban Meyer has regularly stated his desire for an even split when it comes to offensive production, aiming for 250 yards on the ground and 250 through the air in every game. So far this season, one side of the ball has shown to be a bit ahead of the pace, and it’s not the one the Buckeyes have long grown accustomed to.

Sure, the Buckeyes are running the ball efficiently enough, but it’s hardly the ground-and-pound offense that people have come to know. No, this version of Ohio State is built on its passing attack,  which through four games is averaging 365 yards per game. That’s almost unbelievable output when considering the structure of the offense in years past. Most of the national attention is going to Haskins, but it’s the growth and development of the Zone 6 unit of receivers that has allowed the offense to truly evolve.

“We have a lot of depth at receiver,” offensive coordinator Ryan Day said. “So we’re able to play multiple receivers and stay fresh, which I think you could see.” 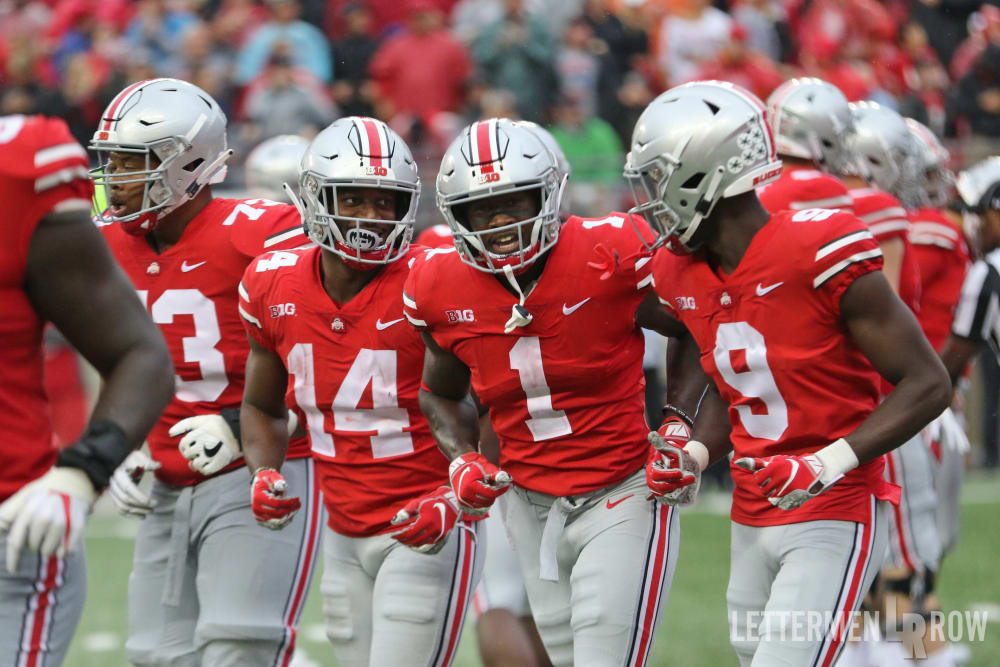 KJ Hill (No. 14), Johnnie Dixon (1) and Binjimen Victor (9) have all emerged as the Ohio State offense has evolved. (Birm/Lettermen Row)

Johnnie Dixon, Parris Campbell and Terry McLaurin, three Ohio State captains, are fifth-year seniors. Redshirt junior K.J. Hill has become one of the most consistent players in the Big Ten, and junior Austin Mack has perhaps the most well-rounded game of the group. The most physically talented of the bunch? That could be junior Binjimen Victor, who scrapes for playing time every single week in the Big Ten’s deepest position group.

This isn’t a Kumbaya circle, though. This is a unit that has been regularly maligned over the last few years. They’ve struggled both individually and as a group. But it’s 2018, and there is a different feeling in Columbus.

“Other than [against] TCU, when we get our hands on the ball, we usually catch it,” Meyer said. “And they’ve been very good at that. So it’s a cumulative effort. And Dwayne will be the first one to admit it.

“But having veteran receivers that have a skill set, everyone can see it on display when we play.”

There’s real growth happening with Ohio State’s wide receivers, and there is plenty of credit to go around along with all those receptions.

New wide receivers coach Brian Hartline obviously has an influence on the group. Now handling the full-time coaching duties after helping out last year as a quality control coach, his impact can be seen in the precise way the group runs routes these days. But it’s just one piece of the puzzle.

Hell, some of this really started in 2015 when Michael Thomas put aside his need for catches and chose instead to just work tirelessly on every play. That’s why it’s impossible to overlook how important the off-the-field stuff is when it comes to developing wide receivers.

It would be hard to find any group of players more emotionally ready to handle the transition these receivers faced in August. That’s not solely a result of Hartline’s work, but the commitment from four guys that didn’t need to return for 2018 but chose to stick around to improve both themselves and the program. 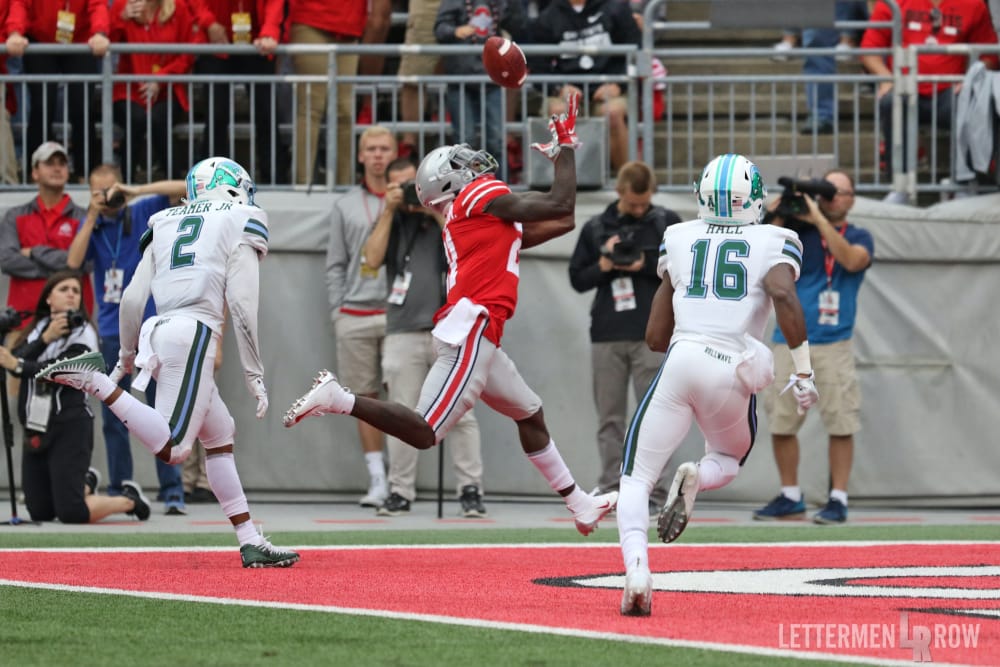 If not for his teammates support in 2015, Parris Campbell may not be making catches like this in 2018. (Birm/Lettermen Row)

These aren’t your typical wide receivers. These aren’t the divas that soil the position’s reputation around the country. These dudes are grinders — talented and hard-working. They’re kids who arrived in strength coach Mick Marotti’s room as freshmen in 2014 looking to change the culture at their position.

They did. They are. It can’t be seen any more plainly than with Victor, who has a renewed vigor for the little parts of the game that make a receiver great. The downfield blocking, running every route as hard as he can with maximum intensity — and the eventual reward with a touchdown catch.

Day praised him for his effort to make a tackle after an interception against Oregon State. And Meyer found it necessary to laud his effort following a gritty, come-from-behind win against TCU.

“Bin Victor,” Meyer said. “He didn’t have any catches, but he really started to come on … threw himself in there on some great blocks.”

It began in the weight room, but the effort there hadn’t really translated to on-the-field production. There were still a lot of dropped balls, some with devastating, almost year-long consequences.

Parris Campbell had two big drops against Virginia Tech in 2015 that haunted him the entire year. By the time he was a redshirt junior in 2017, those drops were less frequent, but so was the impact they had on him. Remember the Buckeyes season opener against Indiana last August? With Ohio State trailing the Hoosiers, Campbell dropped a surefire touchdown from J.T. Barrett at a pivotal moment early in the third quarter. That’s a play that, earlier in his career, might’ve led to a mental knock-out. As a veteran? It didn’t. Campbell got his chance to correct it and did so in explosive fashion.

And just like that … the Bucks are back on top.

They're trading TDs in Indiana, so you might want to get over to ESPN or the ESPN App. pic.twitter.com/HlNnIIgOwA

“For a split second there, I kind of got down in the dumps just because those are plays I’ve made numerous times in practice,” Campbell said. “As soon as I got back to the sideline, I had Johnnie Dixon there and Terry McLaurin there, who are my best friends. They kept me up and told me to leave it in the past and just get past it and make the next play.”

That’s what this group of Ohio State wide receivers had to do recently with Mack, too. His four-drop performance against TCU would’ve been nightmare fuel for a less mentally strong group. Instead, it may be a launching pad for the rest of his career.

“Some days guys are going to maybe put one on the ground,” Day said. “We don’t like that, but we believe in our guys. And when things don’t go well, we’ve got to stick together.”

Collectively, they’re all bringing along a young quarterback. There’s nothing better than a security blanket at wide receiver, and Dwayne Haskins has a whole room of them.

Dwayne Haskins tunes out Heisman hype: ‘I let my play speak for itself’
Time is now for Ohio State linebackers to show up, make major impact