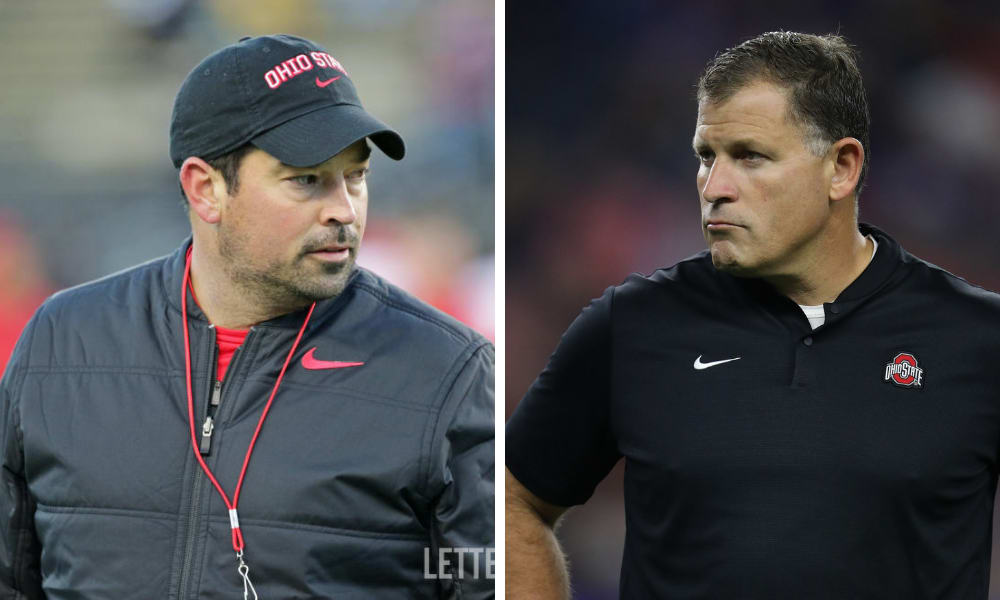 Pulled off the road from scheduled recruiting duties to be sequestered with head coach Urban Meyer, Ohio State’s Ryan Day and Greg Schiano were part of 12-hour meetings Monday that precipitated the Buckeyes’ team meeting and return to practice on Tuesday.

By midweek, Day and Schiano both admitted the Buckeyes are in a deep-dive of self-evaluation to see how this open-date week can best be utilized moving forward. Ohio State, mind you, is 7-1 and still controls its College Football Playoff destiny. Win its next four, as well as another Big Ten championship, and Vegas oddsmakers, as well as most projections, show the Buckeyes as likely playoff participants.

What did LettermenRow.com learn from Wednesday afternoon’s session with Day’s thoughts on the offense and Schiano’s counter-perspective from the defensive side of the ball? Plow forward.

In their comeback win in the season’s opening month against TCU in Arlington, Texas, the Buckeyes selectively dialed up some clutch runs that were executed deftly by Dwayne Haskins. But the QB runs that have, for most of Urban Meyer’s Columbus tenure, been de rigueur, are no longer a staple of this offense.

Haskins merely is eviscerating school passing records week after week. Still, Ohio State’s red zone struggles — their nine times failing to score this season in the red zone already are more than all of last season — has Day admitting all options are being explored.

Day dismissed the notion that the Buckeyes’ steady diet of RPOs (run-pass option plays) had caused the Buckeyes’ offensive linemen to throttle back their aggression.

Day said regardless of play-call, he wanted an offensive line that sought to impose its will upon the opposition every snap.

TO THE VICTOR GOES THE START

With Austin Mack out for the remainder of the regular season, Ohio State’s deep receiving corps is looking for the next man up. Starting in place of Mack, at least when the Buckeyes return from their open date next weekend at home against Nebraska, is Benjimen Victor. He has 14 catches for 236 yards, including a pivotal score in the win at Penn State.

Day, however, said the Buckeyes will use multiple players to fill Mack’s void and also would want to see Victor seizing the initial start as an opportunity to hold the post for the rest of the season.

BACKING UP? NOT THE ’BACKERS

But, the veteran coach stressed, this past week’s poor second-half performance came as the Buckeyes deployed this tactic perhaps the least of any game this season.

“There’s different times this year that we have walked up one linebacker to the line of scrimmage,” Schiano said. “We actually moved away from that last week. So if you study the game, watched the game last week, there were a few times, in base defense probably a couple times they were walked up.

“Now third down, when you’re doing some exotic blitzes and things, we’re going to have them walked up. We always have.”

Schiano said the Buckeyes had anticipated both drawing more double-teams from the additional presence of a linebacker or backers near the line of scrimmage and that the players would improve in that schematic area.

He candidly admitted the group has not improved as expected in that regard and that it would be still utilized, perhaps more selectively, down the season’s final third.

Schiano said an open week has allowed the Buckeyes to refocus on some fundamentals — he cited a season-worst 20 missed tackles last week — but would not yield wholesale defensive changes in personnel or plans.

He also said that Ohio State had charted the defense had been effective on 67 percent of first- and second-down plays; he labeled the unit’s trajectory as upward.

Schiano says analysis shows the Buckeyes are playing more zone than usual this season but that they aren’t going to be a “Tampa-2 zone team” and never want to be.

Looking at ways to mix more zone coverage against their preferred man schemes is happening this week, he said, but the Buckeyes are intending to remain a primarily man-to-man coverage secondary. Schiano says the prevalence of RPOs requires the Buckeyes — and virtually all defenses — to commit to more man-coverage tenets.