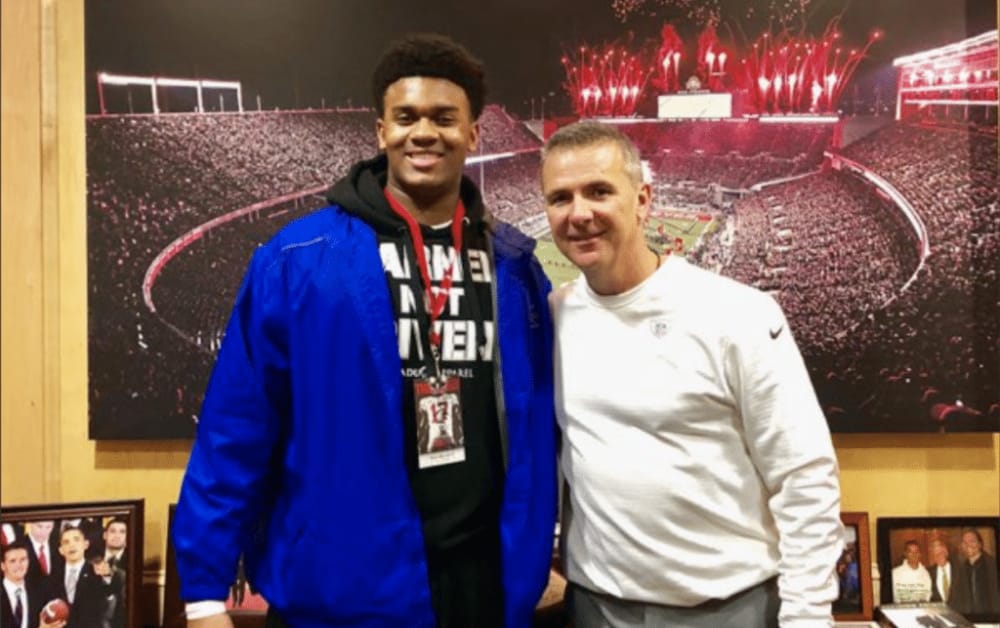 Paris Johnson is trying to lure some basketball talent to Columbus. (@ParisJohnsonJr on Twitter)

Ohio State’s Class of 2020 is already off to a roaring start, and it appears those players are willing to help out the basketball team when not building an elite recruiting class in their own sport.

“We’re going to be elite,” 5-star 2020 offensive tackle Paris Johnson said to Lettermen Row on Saturday following the news that 5-star 2019 point guard DJ Carton had committed to the Buckeyes. “On the football field and the basketball court.”

It’s unusual for a football prospect or a group of them to be that concerned about the hardwood. For Johnson, though, it just makes sense to try and help out the future of the entire athletic department at Ohio State.

“I talked with Carton the day before he committed,” Johnson said. “I just told him that Ohio State was the best move. We’re going to build a dynasty. Yes, we’re focusing on our class first, but we can have both sports be at the top.”

Mike Kudla, a former All-Big Ten defensive end who was the defensive MVP of Ohio State’s 2005 team, unexpectedly passed away at age 34 on Sunday according to a release from his former school district.

Those are three very good players and likely captains. Campbell and Prince are seniors, and Jones is a fourth-year junior who almost certainly won’t be back in 2019. With that being said, it’s still a little disappointing that players like Dwayne Haskins, Nick Bosa, Mike Weber and J.K. Dobbins won’t be taking part. There’s nothing wrong with an unspoken policy that honors seniors or fourth-year juniors, but at a school where many players leave after three seasons, it seems worth reconsidering — especially since all four of the aforementioned players are also good kids who would represent the program well.

Coming off an amazing end to his college career in 2014, wide receiver Devin Smith looked set for success when the New York Jets drafted him in the second round of the 2015 NFL Draft. Unfortunately, his career has been stymied by two ACL tears. The Jets cut Smith on Monday, bringing to an end what looked it could be a promising partnership.

RIP Mike. We all lost a brother and great friend today. He was the ultimate war daddy. One of baddest dudes I’ve ever played with, but also one of the most kind and genuine guys you could ever meet. Prayers go out to the Kudla family during this difficult time. pic.twitter.com/V4Sh0UM8yV

That First Purge has me all kindsssss of freaked out