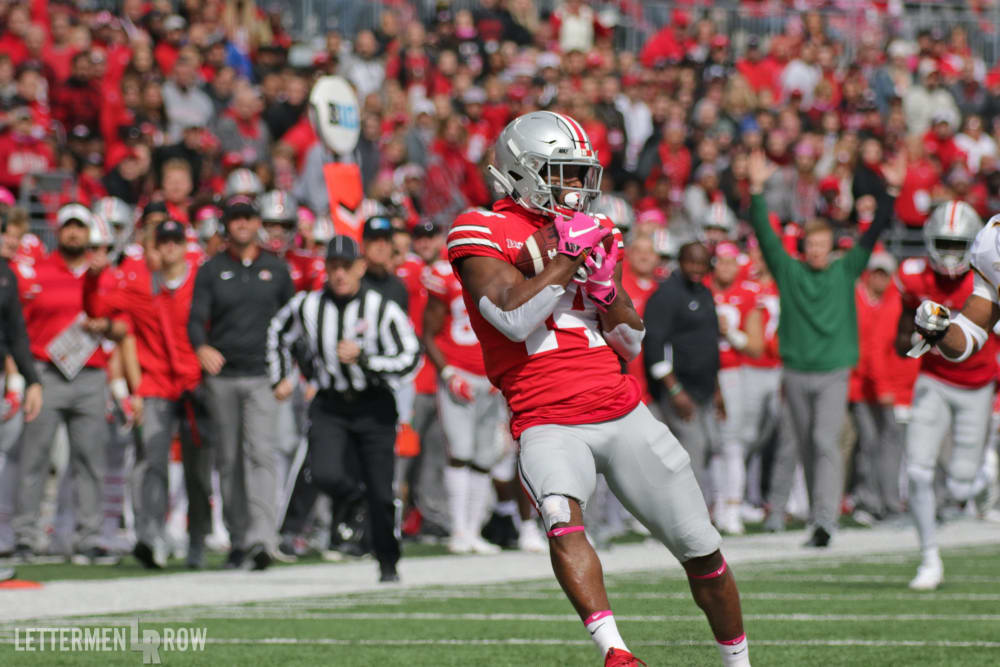 K.J. Hill had a big day vs. Minnesota (Birm/Lettermen Row)

It took a second-half defensive shutout and an unlikely kicker stepping into the spotlighting, but third-ranked Ohio State ran its record to a sparkling 7-0 by virtue of today’s 30-14 win against pesky Minnesota.

In a new feature we’ll continue for the remainder of the season here on LettermenRow.com, we bring you the game superlatives and “Moments that Mattered” for the Buckeyes.

PLAY OF THE GAME

K.J. STICKUM: Wideout K.J. Hill continued his knack for big moments with a scintillating, one-handed touchdown grab that catapulted the Buckeyes to a 17-14 lead and set the stage for OSU to close the game by outscoring the Golden Gophers, 20-0.

Working in the seam after being bunched near the left side of the line of scrimmage, Hill went unchecked, made a small adjustment to Dwayne Haskins’ throw on his right shoulder and coasted untouched behind the Minnesota defense and into the end zone. Hill palmed the ball in his right hand as he scored, mimicking that the football was stuck like glue. And on that play, Hill stuck it to the Gophers and OSU never again trailed.

PLAYER OF THE GAME

BIG-PLAY DWAYNE: Keep clearing space in the record books. Dwayne Haskins seemingly wants all the passing marks. All of them. Haskins showed his surgical precision early with a perfectly placed spiral to Hill for a 43-yard gain to set up the game’s opening score, and he did not stop dissecting the Gophers’ defense until the very end, when he polished off the two-touchdown win with a salvo to Hill down the middle for six.

All Haskins did was close with 412 yards and three touchdowns, completing a dazzling 75 percent of his tosses (33-for-44). In the past two weeks, Haskins has gone 66-for-88 with 867 yards and nine touchdowns.

Haskins threw three scoring tosses to two different players in this win, as his first score was a perfectly placed ball into the end zone that saw Terry McLaurin make the grab over the head of the Minnesota defensive back.

SHEFFIELD IS TEXTBOOK: Stifling the Gophers’ first drive into OSU territory, defensive back Kendall Sheffield displayed a one-play video tutorial on his interception. Note how Sheffield flipped his hips and immediately ran with the Minnesota wideout downfield but kept his eyes trained on Gophers quarterback Zack Annexstad. Sheffield looked like the natural receiver on the play with the ease he converted the interception.

WADE’S WORLD: Once again, the Buckeyes’ defense delivered after Minnesota crossed midfield. This time, Shaun Wade perfectly dislodged the ball from the Minnesota receiver, and Jeffrey Okudah scooped up the ball on a shortstop bounce.

PRYOR CONVICTION: Isaiah Pryor snuffed out Minnesota’s last real scoring threat when he read Annexstad’s eyes, helped over the top and made a leaping, acrobatic pick that carried Pryor into the end zone. Though Pryor did not appear to have full possession until he landed in the end zone, officials credited him with possession of the ball at the 2-yard line, where the Buckeyes’ offense took over possession. OSU cleared enough real estate to get out of trouble and punt away the ball. The Gophers badly missed a field goal attempt wide right, and Haskins went back to the operating room.

KICK IT UP A NOTCH: Give it up for Blake Haubeil, who was forced into action when Sean Nuernberger could not handle place-kicking duties for the day. The Buckeyes’ regular kickoff specialist, Haubeil had provided the difference in the game with three field goals that covered 21, 47 and 27 yards. Haubeil’s kicks had the Buckeyes holding onto a 23-14 lead until Haskins and the offense were able to put the game safely out of reach inside the final five minutes.