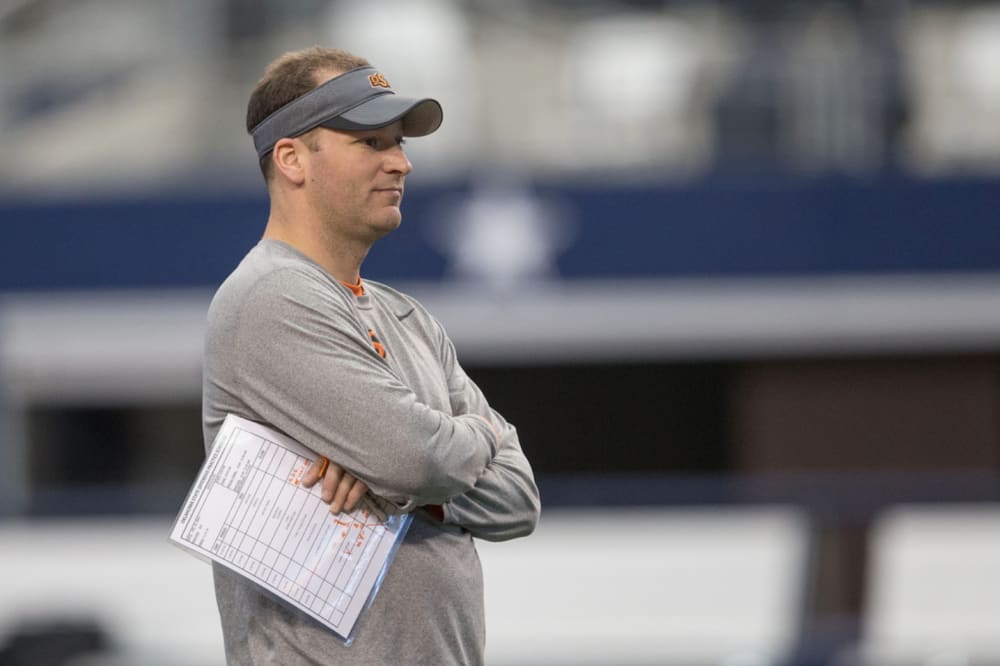 The Buckeyes beat out a reported bid from Tennessee for his services, giving new head coach Ryan Day an accomplished name for the first new assistant coaching hire of his tenure. Yurcich spent the last six seasons at Oklahoma State, where the Cowboys were routinely among the most prolific and efficient offenses in the country.

“I am really excited to announce that Mike is joining the Ohio State staff,” Day said. “Mike is not only an Ohioan coming home, but he is also an extremely talented coach who has enjoyed success throughout his career. His Oklahoma State offenses have been among the most proficient in college football and I look forward to welcoming and introducing Mike and his family to our staff, players and community.”

With that in mind, here are five things Ohio State fans need to know about the first new assistant coaching hire of the Ryan Day era.

Mike Yurcich is from Ohio and has midwestern roots

Mike Yurcich was born in Euclid, Ohio. He began his college playing career at Mount Union in Alliance, Ohio, before transferring to California University of Pennsylvania. There, he was a three-year starter at quarterback and also served as a team captain during his final two seasons.

He also got his coaching career started in the Midwest. He was an assistant at St. Francis in Indiana for three seasons before serving as a graduate assistant at Indiana under Gerry Dinardo in 2003-04. He was hired by Division II Edinboro of the Pennsylvania State Athletic Conference (PSAC) in 2005 and worked there through the 2010 season, serving as the offensive coordinator from 2006 onward.

In 2011 he was hired by fellow PSAC program Shippensburg and served as offensive coordinator for two seasons before being hired by Mike Gundy at Oklahoma State in 2013. He has directed the Cowboys’ offense for each of the last six seasons but now will return to the Midwest and his home state to coach at Ohio State.

Mike Gundy found him on the internet

No, really. And to that point, any Ohio State fan curious about Yurcich should check out this 2017 post from Adam Rittenberg of ESPN.com that gives the backstory.

Gundy went online and looked up offenses that excelled both with rushing and passing numbers. He then narrowed the search to no-huddle, tempo-based offenses similar to Oklahoma State’s. Next, he found coordinators who also coached quarterbacks. The last step, the trickiest, was identifying lesser-known coaches who might stick around even after successful seasons.

Starting at the FBS level, Gundy worked his way to Shippensburg University, a Division II program in south central Pennsylvania. Under Yurcich, Shippensburg had led Division II in offense (529.2 yards per game) and ranked second in scoring (46.9 PPG) in 2012, a year after shattering team records for scoring and yards.

The next challenge: finding Yurcich.

“You called the office and nobody answered,” Gundy said. “It essentially was recordings, and I kept trying. Finally somebody answered — I don’t know who it was, maybe somebody who worked there and walked by and grabbed the phone — and they said, ‘He’s gone recruiting,’ or something. And I said, ‘Well, how do I run him down?'”

Gundy finally connected with the Raiders’ offensive coordinator and arranged a meeting at a hotel near where he would be recruiting. On a cold, snowy day early in 2013, the two men met and talked ball for three hours. Gundy did some vetting, talking with Shippensburg coach Mark Maciejewski, but knew he had his man.

What a way to get his big break.

During Yurcich’s time at Oklahoma State, he was in charge of Mason Rudolph and helped guide him to what was essentially a rewriting of the entire offensive record book. According to Yurcich’s Oklahoma State bio, Rudolph broke at least 50 school records during his college career.

In 2o17, Rudolph had a sensational campaign that helped him win the Johnny Unitas Golden Arm Award. Rudolph passed for 4,553 yards, 35 touchdowns and nine interceptions during his senior season. He also completed 65.0 percent of his passes that year.

Rudolph was also one of three finalists for the Davey O’Brien Award given to the nation’s best quarterback, and he was taken in the third round of the 2018 NFL Draft by the Pittsburgh Steelers.

He developed talent at the lower level, too

Before Mason Rudolph, there was Zach Zulli. Yurcich’s work with Zulli at Shippensburg in 2012 was pivotal in helping him gain the attention of Gundy. That season, Zulli passed for 4,747 yards and 54 touchdowns and won the Harlon Hill Trophy as the top Division II football player.

Really buried the lead with this one, huh? At the end of the day it’s overall team effectiveness that matters most and Yurcich’s offenses as a whole have been as good as it gets.

In 2018, Oklahoma State finished No. 10 nationally in the Football Outsiders S&P+ ratings, a metric that measures how efficient an offense is. The Cowboys’ previous ranks under Yurcich in that stat:

Other than a one-year outlier, the Cowboys continued on an upward trajectory and established themselves as one of the best offenses in the country. The 2017 group ranked first in passing offense, second in total offense and fourth in scoring. Heading into bowl season, Oklahoma State was in the top 15 nationally in each of those categories once more.

He’ll be handsomely rewarded for it

The official statement from Ohio State noted that Yurcich agreed to a two-year contract worth $950,000 per year. That’s a far cry from what he was making during his time in the PSAC. As the story from Rittenberg noted, Yurcich was making $52,500 as Shippensburg’s offensive coordinator when Gundy hired him and boosted his pay to $400,000.

He’s only kept rising since.