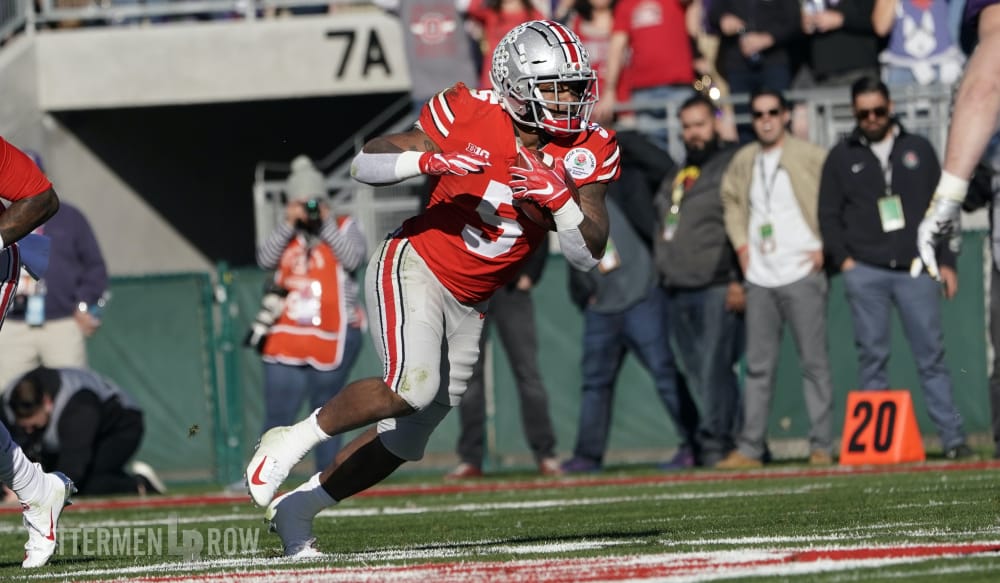 Former Ohio State running back Mike Weber is a problem when he's healthy and on the field. (Birm/Lettermen Row)

COLUMBUS — The era of the two-headed monster at Ohio State made up of J.K. Dobbins and Mike Weber is no more.

Dobbins, the yards leader on the ground last season for the Buckeyes, is returning for his junior season while Weber is hoping for a shot at the next level. But the rushing attack at Ohio State will still be a threat with Dobbins returning and the likes of Master Teague, Marcus Crowley and Steele Chambers all looking for a share of the carries.

As for Weber, he and nine other former Buckeyes will have the NFL Combine this week and their pro day to give teams one last look at their skills before the NFL Draft in April. Despite battling injuries during his career at Ohio State, Weber was a handful for opposing defenses when he was healthy. The Detroit-native racked up over 2,500 yards, 24 touchdowns and averaged nearly six yards per carry during his three years in Columbus — and always seemed to have a knack for producing some of his best performances against his home-state rivals.

The transition to the NFL for Weber could be an easy one with his skills. But with some fumbling and health issues troubling him at times, some teams may be hesitant on selecting him early in the draft.

Where will he go then? Lettermen Row is looking at a few reasons why no matter where he ends up, Weber is a strong selection for any franchise to rely on.

Despite being considered the bruiser of the former dynamic duo in the Ohio State backfield, Mike Weber proved during his three seasons of action that he has the first step and acceleration to blow through the line of scrimmage on the snap of the ball.

Nagging injuries to his lower body throughout his collegiate career slowed down at times, but when he was healthy, Weber made it very difficult to determine who the better back was between himself and Dobbins. His effort was easy to notice because of how hard he runs on each down, and I believe his explosive running style was the reason why he averaged at least 5.5 yards per carry in all three seasons with Ohio State.

Likely the best display of his initial burst of acceleration benefiting him came against Michigan State in 2017, when Weber returned from a mild injury and rushed for 162 yards on just nine carries and scored a pair of long touchdowns that showed his open-field ability as well. If an NFL franchise is looking to add a complement to their current running back, Weber will provide it with the muscle but also the ability to get yards when needed. 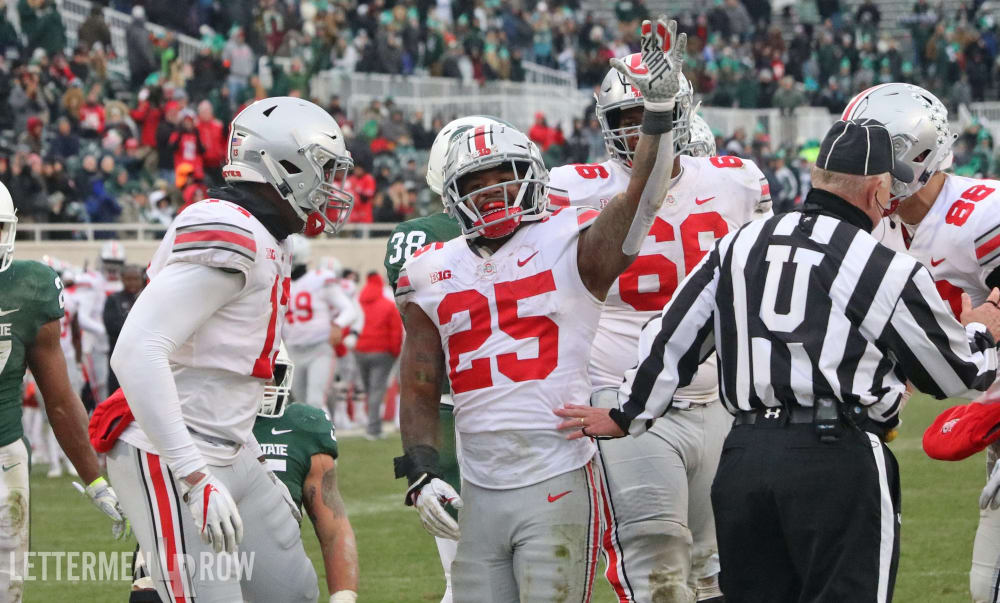 Former Ohio State running back Mike Weber had some of his best games for the Buckeyes against his home-state rivals. (Birm/Lettermen Row)

Mike Weber is tough to tackle

Between his stiff arms, lowering his shoulder and simply just defenders bouncing off of him, Mike Weber is a handful when it comes to trying to bring him to the ground.

At 5-foot-10, 214 pounds, the former Ohio State running back is a small load with good balance, and mixing that with his angry running style makes him a major threat between the tackles. However, when he gets around the edge of the offensive line, he’s just as difficult to take down with the arsenal of moves that can make any defender look ridiculous. Weber had a few memorable runs during his time at Ohio State, but one of his best games from last season against Nebraska included two runs that I believe capture the full skill set.

The first truly highlights how fantastic Weber’s vision and agility are as he turns a possible five-yard loss into a 27-yard gain with one cutback across the field, while the other shows an unbelievable spin move to bounce a run out on the edge and portrays how easy it is for defenders to slide off his pads trying to bring him down. Those are just two examples of Weber’s ability to break tackles in a variety of ways, but he also has other moments where a stiff arm or lowering his shoulder have allowed him to snag extra yards.

And NFL teams are always looking to add a solid running back into the mix to pick up positive yardage on a consistent basis.

Yes, catching the ball out of the backfield is not a specialty for Ohio State tailbacks normally. But dating back to Ezekiel Elliott, the Buckeyes have been fortunate to have running backs who can be versatile enough where if the quarterback needs to check down, he can catch a quick pass in the flat or in the middle of the field — and Mike Weber is pretty great at that.

Being a receiver is not the best aspect of his game by any means, but if an NFL team is looking for a running back who can also provide a solid option for their gunslinger to find on a screen or under pressure, Weber may be its guy. A perfect example of his catching abilities came in last season’s loss to Purdue, and while they are not the most beautiful or ground-breaking plays you will ever see, these three catches Weber made show a whole lot of potential — and more work to be done to improve that part of his game. 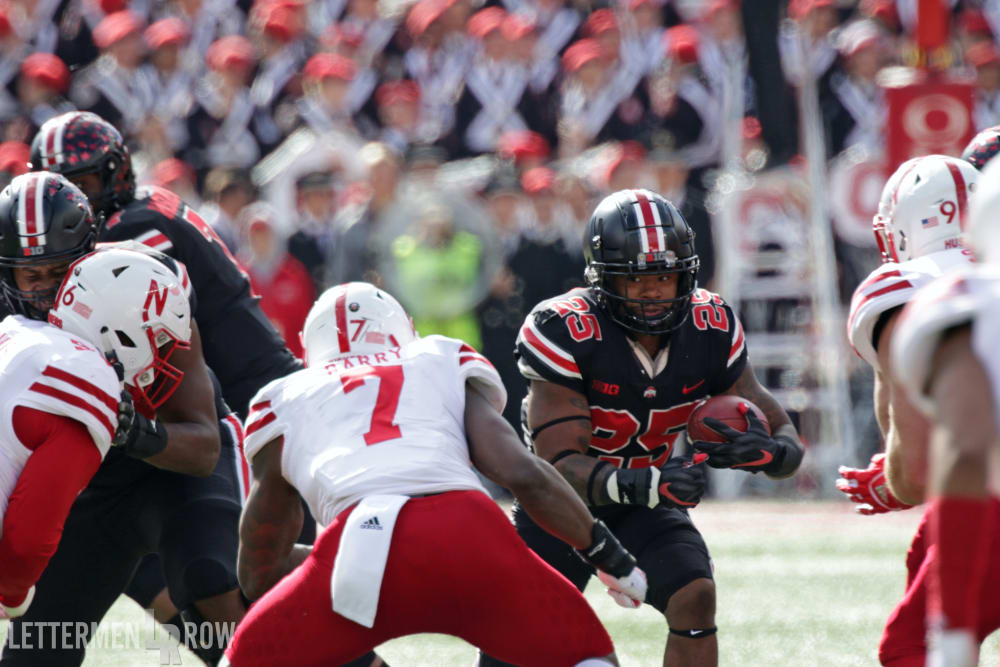 Former Ohio State running back Mike Weber still has some work to do in order to become a complete back. (Birm/Lettermen Row)

Mike Weber is ready to be the featured back

After sharing the backfield with J.K. Dobbins for the last two seasons, there is one thing I know for a fact: Mike Weber is ready to be the guy for a team at the next level. And according to the numbers from his redshirt freshman season, he could be even more of a problem for defenses if he’s handling a large load of the carries.

During that year, Weber was really the only true running back on the Buckeyes roster. No, I am not forgetting Curtis Samuel or Dontre Wilson, but both of those guys were seen more in that coveted H-back role despite lining up in the backfield on a majority of the snaps that season. Weber had the second-most carries on the team behind Samuel and thrived in that situation by racking up just over 1,000 yards on the ground and averaging nearly 85 yards per game — both of which were career highs. The slew of injuries Weber dealt with and Dobbins entering the mix caused him to not take as many snaps the next season, but his final year was relatively similar to the first in terms of carries, yards and yards per carry.

So, could Weber work well in a two-back system in the NFL? Surely. He just did it in back-to-back seasons. However, I think Weber would really flourish receiving the majority of the carries as the featured back at the next level.

After battling hamstring, ankle and wrist ailments combined with a true freshman running back arriving on campus to share his carries, Mike Weber’s redshirt junior season likely was not easy for him.

We already discussed how excellent he was in his first year of action at Ohio State, and despite finding the end zone more often and having a higher average yards per carry his second season, Weber’s attempts and total yards both exponentially dropped off. Weber was eligible for the NFL Draft at that point, and no one would have blamed him for wanting to go after what he had just experienced. He was emotional following the win over USC in the 2017 Cotton Bowl and he weighed all of his options in order to decide what his next step would be. Ultimately, Weber felt he had work left to do for the Buckeyes and decided he had one more year left in him to prove what he can do on the field — and I’d say it worked out for him and Ohio State.

If a team is looking for a talented running back in this year’s NFL Draft that is willing to wait his turn, Weber may be the guy to get. But when he does finally get his chance, don’t be surprised to see the former Ohio State star making a career for himself.

Continue Reading
You may also like...
Related Topics:Featured, Mike Weber