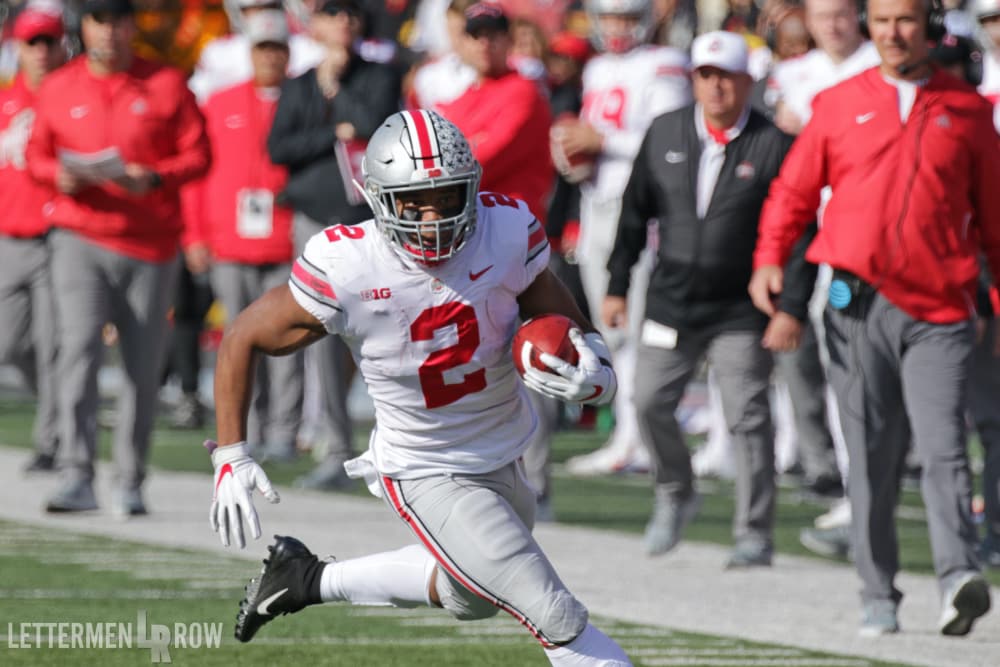 As it unfolded, “strange” was the word that consistently characterized this Ohio State-Maryland matinee.

As we continue our gameday fixture, here are the ‘Moments That Mattered’ in Saturday’s wild tilt in College Park, Md.

THE PASS IS AWAY … AND INCOMPLETE

A game that lacked no shortage of key plays — entire seasons might not produce these highlights a decade ago — ended on an incomplete pass after the two teams had combined for 103 points.

Tyrell Pigrome appeared to have an open receiver and a Maryland victory at the end of his toss, but it sailed not particularly close and Ohio State held on to win.

Merely a redshirt sophomore, Dwayne Haskins obliterated the Ohio State single-season passing yardage mark early in this contest — and fittingly in big-play fashion. Haskins converted on a deep throw-and-score to senior glue-man Terry McLaurin, who had blown past the Maryland defense and then outran several defenders the final 20 yards into the end zone.

It was the first of Haskins’ touchdown tosses on the day and moved the gunslinger who grew up not far from the Maryland campus past Joe Germaine’s 20-year-old record of 3,330 yards.

Haskins later connected with K.J. Hill for a six-yard score in the fourth quarter that pulled the Buckeyes into a tie, 31-all, with Maryland for the first time all afternoon that the score had been level.

Haskins also notched three rushing touchdowns, uncorking that element of his game to its greatest extent this season; the second plunge knotted the game again, this time at 38-all.

Later, as Haskins was breaking J.T. Barrett’s single-season mark for touchdown passes, he expertly executed a back-shoulder throw to Binjimen Victor in the end zone that forced the game into overtime at 45-all.

Then, in overtime, Haskins bull-rushed from 5 yards out for the Buckeyes’ first lead of the day, 52-45.

IT’S A FUMBLE … AND IT IS HUGE

After Ohio State had at least appeared to limit Maryland to a late-game field-goal situation, pass interference set up Maryland at the 2-yard line with first-and-goal.

Anthony McFarland, Maryland’s hero most of the day, fumbled into the end zone and Chigoziem Okonwo recovered for the crushing touchdown, 45-38. 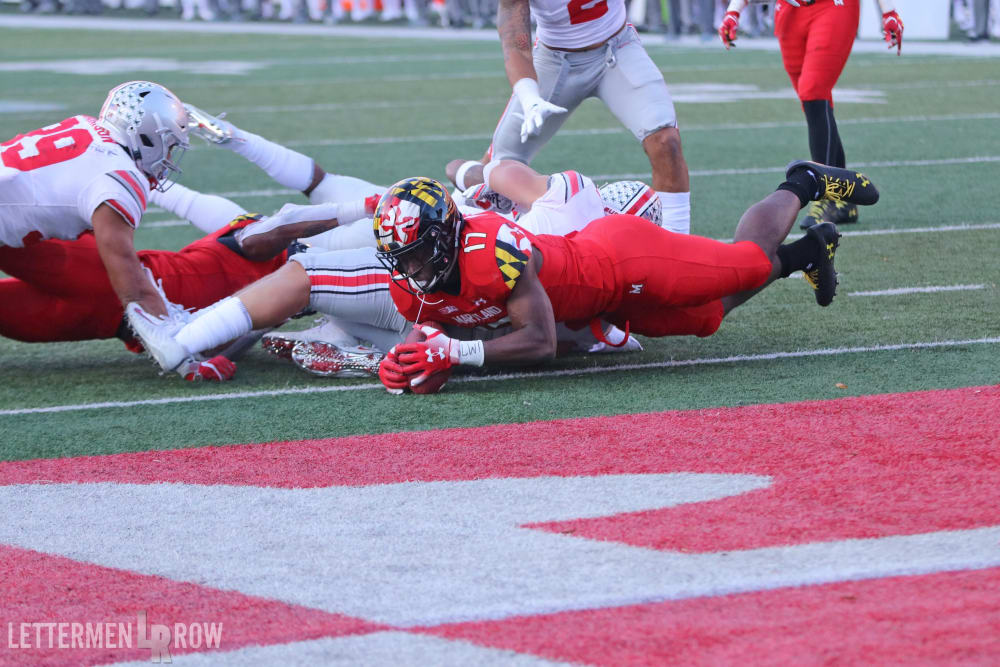 Anthony McFarland fumbles into the end zone and Chigoziem Okonkwo recovers for the touchdown. (Birm/Lettermen Row)

This game after a bizarre fake-punt play that caught the Buckeyes flat-footed.

Ohio State finally had tied the game, had momentum and seemingly had a defensive stop that would give its offense back the ball with a chance for a lead for the first time all game.

Maryland punter Wade Lees, a rugby-style Aussie kicker, deftly executed the stunning fake punt on fourth-and-8 and completed a 15-yard pass. Mere moments later, Ohio State’s defense again couldn’t get off the field — this time as it yielded a Tyrell Pigrome to Jeshaun Jones 27-yard scoring pass that again vaulted the Terrapins out front, this time 38-31 when less than eight minutes remained in the contest.

It’s hard to remember a game this season that J.K. Dobbins ran any more effectively or with more rugged purpose. Dobbins definitely found some creases in the Maryland defense, but he also did an excellent job in keeping his legs moving and rarely every being brought down by a single tackler.

Yes, Dobbins had a costly — and less-than-clear — fumble near the halftime buzzer when Ohio State was attempting to even the contest at 24. Still, Dobbins pushed towards 200 yards with more than 30 carries in a complete workhorse-role. He also scored an important touchdown when the Buckeyes faced a 24-10 first-half deficit. 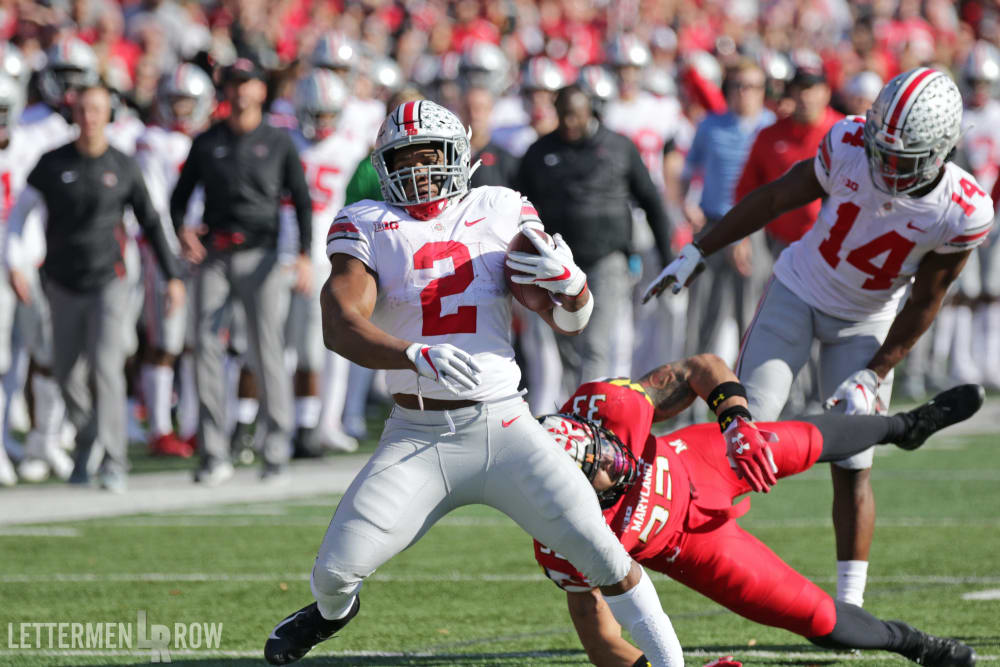 Ohio State dug itself an alarming double-digit deficit in the game’s opening moments because its defense — at times consistently behind the Maryland line of scrimmage and other times almost nonexistent — couldn’t not contain the left edge on running plays.

On the game’s first score, less than 60 seconds into the action, Damon Arnette got briefly sucked toward the middle of the field and Anthony McFarland cleanly did all the rest for Maryland. The speedy McFarland first hit the left perimeter and raced untouched 81 yards for the game’s opening salvo.

A scant four minutes later, McFarland was at it again. This time, on a seemingly identically designed play, McFarland burst away from a few would-be tacklers for an 75-yard scoring sprint.

McFarland had gashed the Buckeyes’ oft-porous perimeter run defense for nearly 300 yards and averaged 15 yards per carry in the process before he briefly went down with a shoulder injury late in the game and was forced into the Maryland locker room for further evaluation. 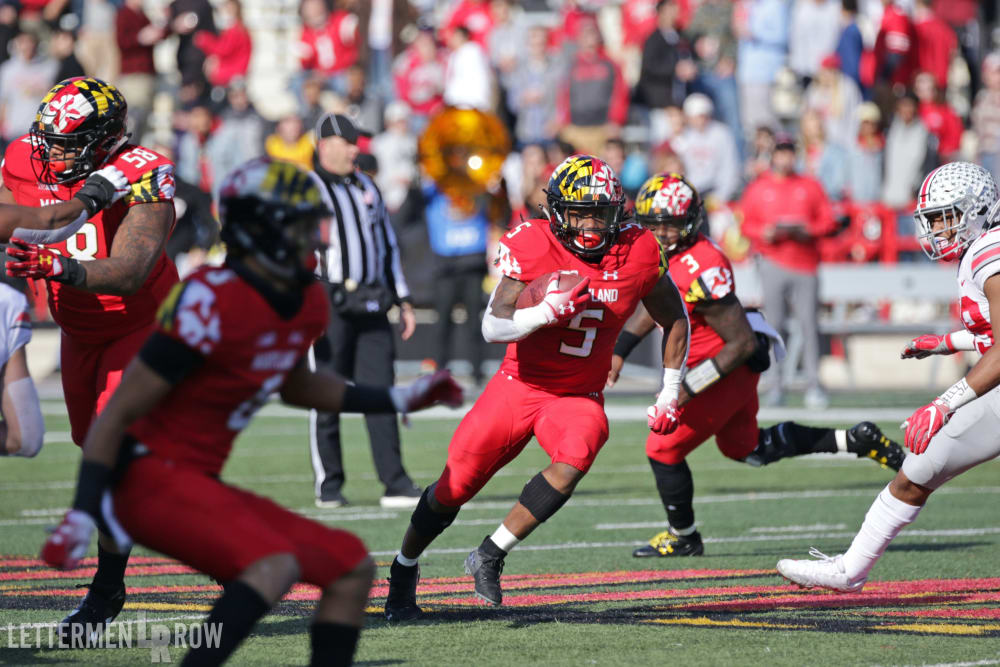 MALIK IS MONEY ON THE SPOT

After Maryland’s opening score, Maryland pooched the ensuing kickoff near the sideline and recovered possession. It was short-lived thanks to first Dre’Mont Jones and then Malik Harrison.

With the ball loose and already deep inside Ohio State territory, Harrison showed spectacular athleticism to recover the fumble and set up Ohio State’s offense with its first possession of the game, which it then turned into a field goal.

Harrison then later in the game had a crucial tackle-for-loss as he sniffed out a bubble screen and left the Maryland offense in a fourth-and-long situation when less than 10 minutes remained in the contest.

That jubilation was short-lived when the Terps converted the fake-punt pass. 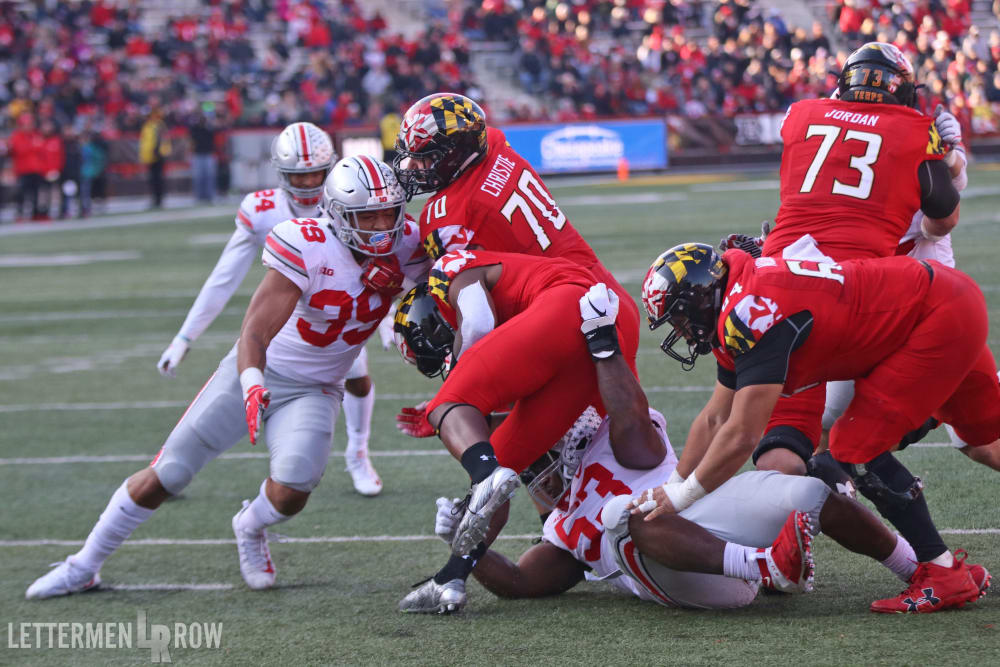